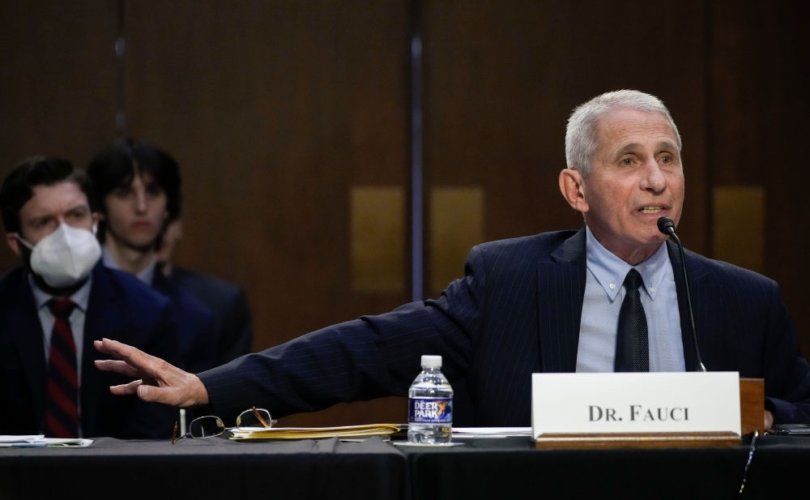 Sen. Paul made the comments during a Wednesday Senate Health, Education, Labor and Pensions committee meeting at which Dr. Fauci testified.

“We’ve been asking you, and you refuse to answer, whether anybody on the vaccine committees gets royalties from the pharmaceutical companies,” Sen. Paul said to Fauci. “I asked you last time and what was your response? ‘We don’t have to tell you.’”

Fauci: “That film that you showed was really taken out of context…Reuters fact-checked, looked at that…”

The Kentucky senator said Fauci again thwarted his efforts to obtain the information after he filed a Freedom of Information Act (FOIA) request.

“But I’ll tell you this, when we get in charge, we’re gonna change the rules and you will have to divulge where you get your royalties from, from what companies, and if anybody on the committee has a conflict of interest,” said Paul, who has repeatedly grilled Dr. Fauci on a range of COVID-related issues, including U.S. funding for gain of function research in Wuhan, China, the importance of natural immunity, and the necessity of masking.

“We’re gonna learn about it,” he said. I promise you that.”

Paul previously brought up the prospect of royalties payments in June, telling Fauci that according to heavily-redacted documents obtained through a watchdog group’s FOIA request, 18,000 National Institutes of Health (NIH) employees received $193 million in the form of 27,000 royalties payments from third parties between 2010 and 2016, KATV reported.

“Can you tell me that you have not received a royalty from any entity that you ever oversaw the distribution of money in research grants?” Paul asked.

Fauci told Paul he didn’t know, but that he doubted it.

Paul’s comments Wednesday came not long after Fauci announced he would step down from his role as director of the National Institute of Allergy and Infectious Diseases (NIAID), a branch of the NIH, by the end of U.S. President Joe Biden’s term. Fauci later said he would actually step down in December of this year.

Fauci has stated he’s not leaving his role to try to dodge investigations after the GOP retakes power after the November midterm elections, but suggested that Republicans might be less likely to “​​come after me” if he wasn’t “in the job.”

In August, Paul affirmed that Fauci wouldn’t save himself from GOP investigations just by removing himself from his NIAID role.

“Fauci’s resignation will not prevent a full-throated investigation into the origins of the pandemic,” Paul said in an August 22 tweet. “He will be asked to testify under oath regarding any discussions he participated in concerning the lab leak.”

Fauci’s resignation will not prevent a full-throated investigation into the origins of the pandemic. He will be asked to testify under oath regarding any discussions he participated in concerning the lab leak.

Meanwhile, Paul isn’t alone in threatening to take action against Fauci, who was subpoenaed in July in connection with a social media collusion lawsuit brought by the Republican Attorneys General of Louisiana and Missouri.

The lawsuit, led by Louisiana Attorney General Jeff Landry and Missouri Attorney General Eric Schmitt, alleges that Fauci and other high-ranking officials in the Biden White House (including Biden himself) conspired to suppress content deemed “misinformation” regarding COVID-19.

Earlier this month, a federal judge ruled that Fauci must turn over his communications with Big Tech companies as the legal action proceeds. White House Press Secretary Karine Jean-Pierre and specific Department of Health and Human Services officials were ordered to do the same.

READ: Fauci among gov’t officials who must hand over Big Tech censorship emails

“I can promise you retirement is not going to save [Fauci] from us,” Landry told the John Solomon Reports podcast Tuesday, adding he wants “to know everything that Dr. Fauci hid from the American people.”

“I think that this is one of the most important cases that I believe eventually will make it up to the Supreme Court in over 100 years,” Landry said.