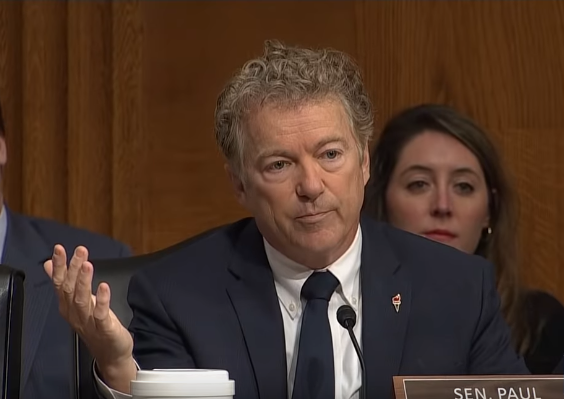 The Kentucky senator and ophthalmologist, who earned his M.D. from Duke University, has alleged that Fauci, who is director of the National Institutes of Allergy and Infectious Disease (NIAID), “lied to Congress” when he claimed in May that the National Institutes of Health (NIH), of which the NIAID is a part, was not funding and had never funded “gain-of-function” research in Wuhan, China.

The letter Paul sent to Attorney General Merrick Garland was dated July 21, just a day after the senator announced his intention to submit the referral on Fox News.

NEW: Here’s the criminal referral @RandPaul sent to Merrick Garland asking the Biden DOJ to open an investigation into whether Dr. Fauci lied during Senate testimony when he said NIH had never funded gain-of-function research at the Wuhan lab. @DCExaminerhttps://t.co/vB5eub6ufX pic.twitter.com/q1IuVNm9AR

In the letter, Paul expressed his intention “to urge the United States Department of Justice to open an investigation into testimony made to the United States Senate Committee on Health, Education, Labor, and Pensions by Dr. Anthony Fauci… on May 11, 2021.”

“NIAID funds many scientific projects both in the U.S. and elsewhere,” Paul wrote. “In response to questioning by me, Dr. Fauci testified that the NIH has not ever and does not now fund gain-of-function research in the Wuhan Institute of Virology.”

Paul then referred to a Wuhan virology paper entitled “Discovery of a rich gene pool of bat SARS-related coronaviruses provides new insights in the origin of SARS coronavirus,” a paper that Paul had requested be delivered to Dr. Fauci during the heated July 20 congressional hearing that occurred just prior to the criminal referral.

According to Paul’s letter to AG Garland, in the research paper Dr. Zheng-Li Shi (a Chinese researcher known as “Bat-Lady” for her work researching bat coronaviruses) “describes research conducted at the Wuhan Institute of Virology and funded under NIAID Award R01AI110964 in which the spike genes from two uncharacterized bat SARS-related coronavirus strain, Rs4231 and Rs7327, were combined with the genomic backbone of another SARS-related coronavirus to create novel chimeric SARS-related viruses that showed cytopathic effects in in primate epithelial cells and replication in human epithelial cells.”

Gain-of-function research is a controversial type of experimentation that “improves the ability of a pathogen to cause disease” in order to “help define the fundamental nature of human-pathogen interactions, thereby enabling assessment of the pandemic potential of emerging infectious agents,” according to the U.S. Department of Health and Human Services (DHS). The research is fundamentally risky, and the DHS noted it “may entail biosafety and biosecurity risks.”

In the letter, Sen. Paul draws the attention of the Department of Justice to “18 U.S. Code § 1001,” which states that “whoever ‘makes any materially false, fictitious, or fraudulent statement or representation’ as part of ‘any investigation or review, conducted pursuant to the authority of any committee, subcommittee, commission or office of the Congress, consistent with applicable rules of the House or Senate’ is subject to criminal fines and imprisonment of up to five years.”

In conclusion, Paul asked that the DOJ “investigate whether Dr. Fauci’s statements to Congress on May 11, 2021 violated that statute or any other.”

Paul’s submission of the referral to the DOJ came shortly after the senator told Fox News talk show host Sean Hannity that he would “be sending a letter to the Department of Justice asking for a criminal referral because he has lied to Congress.”

Rand Paul says he will be sending a criminal referral letter to the DOJ about Fauci pic.twitter.com/B17FZCAVoW

Before making the announcement, Sen. Paul and Dr. Fauci engaged in an explosive back-and-forth in a congressional hearing in which both accused one another of lying.

The hearing was the latest in a series of confrontations between the two over Fauci’s heavy-handed COVID-19 recommendations and his department’s alleged funding of dangerous gain-of-function research in the Chinese lab from which many allege SARS-CoV-2 originated.

“We don’t know that [COVID-19] didn’t come from the lab,” Paul told Fauci in the hearing, “but all the evidence is pointing that it came from the lab, and there will be responsibility for those who funded the lab, including yourself.”

In response, Fauci accused Paul of lying, saying “I totally resent the lie that you are now propagating, senator, because if you look at the viruses that were used in the experiments that were given in the annual reports that were published in the literature, it is molecularly impossible … ”

“No one is saying that those viruses caused the pandemic,” Sen. Paul responded. “What we’re alleging is the gain-of-function research was going on in that lab and NIH funded it. You can’t get away from it. It meets your definition and you are obfuscating the truth.”

Allegations that the NIH was funding gain-of-function research making animal viruses more infectious to humans derive from the fact that the NIH had been awarding grants to American non-profit EcoHealth Alliance since 2013.

As previously reported by LifeSite, EcoHealth collaborated closely with the Wuhan Institute of Virology to study how bat coronaviruses jump to human subjects.

In October 2013, the organization reported it had discovered a new SARS-like coronavirus in Chinese horseshoe bats and had “isolated and cultured a live virus that binds to the human SARS receptor ACE2 and can therefore be transmitted directly from bats to people.”

The nature and extent of EcoHealth’s research was called into question after the COVID-19 pandemic struck early last year. In response then-President Donald Trump ordered the NIH to cancel its active grant to EcoHealth, of which a remaining $369,819 had not yet been paid out.

In an email released as a result of a Freedom of Information Act request (FOIA), EcoHealth Alliance president Dr. Daszak, who was also the principal investigator on the NIH grant, thanked Dr. Fauci for downplaying the theory that COVID-19 had been created in the Wuhan laboratory with which EcoHealth had been collaborating.

“I just wanted to say a personal thank you on behalf of our staff and collaborators for publicly standing up and stating that the scientific evidence supports a natural origin for COVID-19 from a bat-to-human spillover, not a lab release from the Wuhan Institute of Virology,” Daszak wrote.