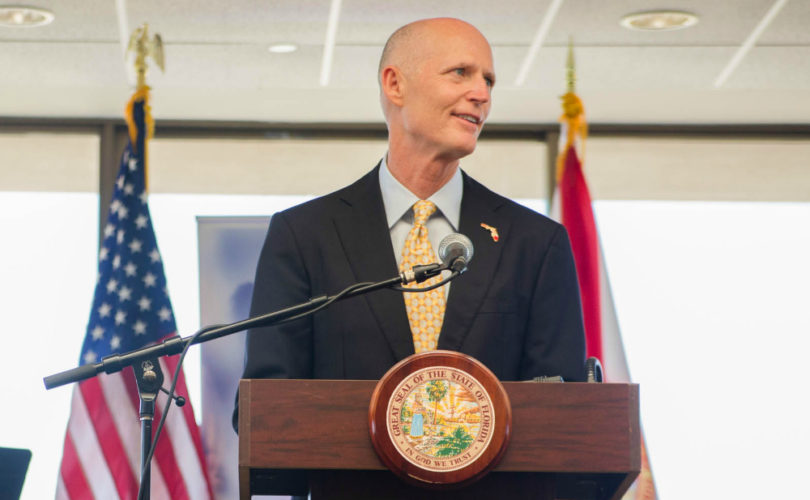 ORLANDO, Florida, June 18, 2021 (LifeSiteNews) — Speaking at the conservative Road to Majority Conference in Orlando, Florida, today, Sen. Rick Scott (R-FL), a former two-term governor of Florida, spoke about religious freedom, socialism, and defending the rights of the unborn, warning that “the values we each believe in are under attack every day.”

Scott said conservatives must fight to defend life against the radical pro-abortion agenda of the Democratic Party, noting that the position of defending the unborn should be a bipartisan one.

“I am pro-life. I don’t water down my words. I don’t look for careful, political sounding cliches. Life begins at conception,” Scott said to rousing applause. “If you deny that, you are absolutely anti-science.”

At the Road to Majority conference today, Scott, who has been a guest speaker for the Young America’s Foundation — a conservative youth organization which brings conservative speakers, conferences, and initiatives to college campuses — expressed his belief that the younger generation is questioning the pro-abortion orthodoxies of the Democrat party, saying that those coming of age now “know that a baby is a baby. It’s not that hard.”

“We’re gonna fight like hell to protect life,” Scott promised. “We can prevent the Democratic Party from leading us down this path to radical socialism, and we will.”

“How many of you have felt that politicians have trampled on your freedoms this year?” Scott asked, enumerating some of the many ways in which liberal politicians and public health agencies have squashed constitutionally protected rights since March 2020, ostensibly to stop the spread of COVID-19.

“We saw liberals attack our fundamental right to worship and use COVID as an excuse,” Scott argued, noting that churches were shut down while violent Black Lives Matter protests were allowed.

“Religious liberty is our first and the most important liberty of the Constitution of the United States,” Scott said, adding that Americans have a “sacred right” to practice their religion.

Scott said the media has “trashed” the faith and work ethic of Americans while embracing radical socialism and teaching a racial ideology designed to “divide us by the color of our skin.”

“We’re going to fight against this woke mob, and these radical democrats who are trying to destroy our country,” Scott vowed. “If we don’t show up and fight we don’t win.”

Scott led the audience in a recitation of the pledge of allegiance after sharing a story about hearing his young grandson say the pledge perfectly, adding that he believes his father, a paratrooper in the Second World War, would have been proud to hear his grandchild recite the pledge of the nation he fought for.

Scott, who has been married to his high school sweetheart for 46 years, with two daughters and seven grandchildren, told the audience that Americans must fight to protect the rights and freedoms of the generations currently growing up in America against a socialistic agenda which seeks to upend the traditions and values of the United States.

Scott, who grew up in public housing in Kansas with an adoptive father and a mother who worked as a store clerk, said, “America is the greatest country in the world. This country has given more opportunity for people here and around the world than any country ever created.”

The 2021 Road to Majority Conference taking place this weekend features a line-up of conservative speakers, including Sen. Ted Cruz (R-TX), Rep. Madison Cawthorne (R-NC), and Florida Gov. Ron DeSantis (R), who will be the keynote speaker on Saturday night.