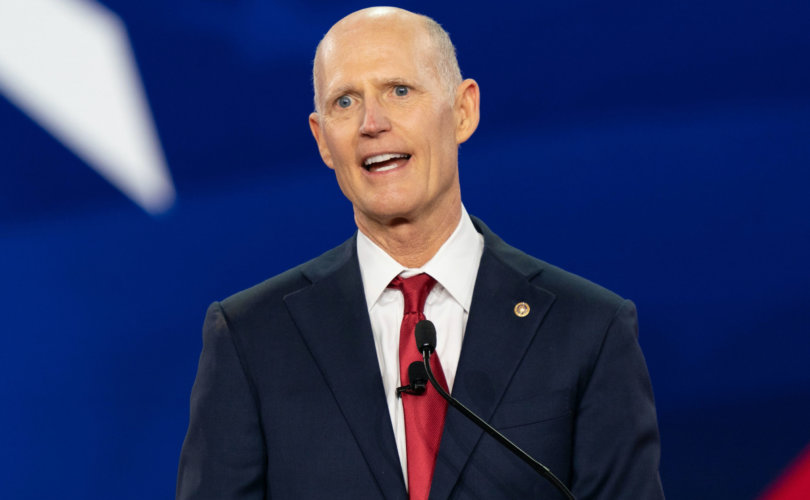 MIAMI (LifeSiteNews) – The woke left wants “to have absolute control of our lives,” Sen. Rick Scott (R-FL) told attendees of the National Conservatism Conference on Sunday.

“[The woke] now controls the Democrat Party, the entire federal government, the news media, academia, big tech, Hollywood, most corporate boardrooms, and now even some of our top military leaders. They are working hard to redefine America, silence their opponents. And that means each of you. They’re destroying just about everything they touch there,” he cautioned. “And they have their hands in everything. So here’s [what] they’re trying to destroy. Just think about that for a second. American history. Patriotism. Border security. Gender. Traditional morality. Capitalism. Fiscal responsibility. Opportunity. Rugged individualism. Judeo-Christian values. Free speech. Law enforcement. Religious liberty. Parental involvement in schools. And even private ownership of firearms. The woke wants all of that gone.”

“Their goal is to end the American experiment. They want to replace freedom with their control,” said Scott. “In their new socialist America, everyone will obey and no one will be allowed to complain. If you speak up, boom, you’re going to be canceled.”

“The militant left in America are the modern-day version of book burners,” he continued. “Canceling, silencing, and banning from the Internet is book burning. These are the most narrow-minded and most intolerant people our country has ever seen, and they’re remarkably ignorant of both world history and American history.”

Scott, who served as governor of Florida from 2011 to 2019, slammed socialism as one of the “oldest, dumbest” and “most discredited ideas” of the 20th century.

“What the militant left that is now proposing is not simply wrong,” he continued. “It is evil and it always results in evil.”

Scott criticized the Biden administration as having “successfully merged radical left-wing policy with complete gross incompetence,” listing the examples of inflation, empty shelves and the formula shortage, “the inept withdrawal from Afghanistan,” indoctrination in public schools, rising crime, and “dangerous invasion of our border.”

“All this makes you stop and ask: Is this the end of America? It could be,” he said. “But it will only happen if we allow it to happen.”

‘Americans in flyover country have had enough’

Scott began his remarks by decrying “the latest insanity from the Biden administration” which “should terrify every American.”

“The Biden administration is abusing its power and weaponizing the federal government to go after a political opponent,” he said. “If they can do this to a former president, they can do this to anyone. And that’s how you have to think about it. And the Democrats just added 87,000 new IRS agents so they could target hardworking American families. Now, how many of you believe they’re going to go after Democrats? No, they’re going to go after you. They’re gonna go after conservatives.”

“If a Republican administration had done this to a former Democratic president, the media would have its hair on fire.”

Scott said he hopes to take the message he delivered to the National Conservatism Conference to every swing state. He predicted that come midterm elections “this fall, the American public are going to give a complete butt-kicking to the Democrats.”

“The backlash is coming,” he said. “The opposition is clearly building. Americans in flyover country have had enough. They have had enough of this woke elitist nonsense. Americans – we want our freedom back. We all believe it’s time to rescue this country.”

But if Republicans “have no better plan than to be a speed bump on the continued road to socialism, we don’t deserve the government.”

Scott then touted his 12-point “Rescue America” policy priorities if the GOP takes back control of Congress this fall. There must be term limits for federal bureaucrats, “a complete end to any economic relationship with communist China,” “a complete end to racial politics,” said Scott, and the acknowledgement that there are two genders and “unborn babies are actually human beings.”