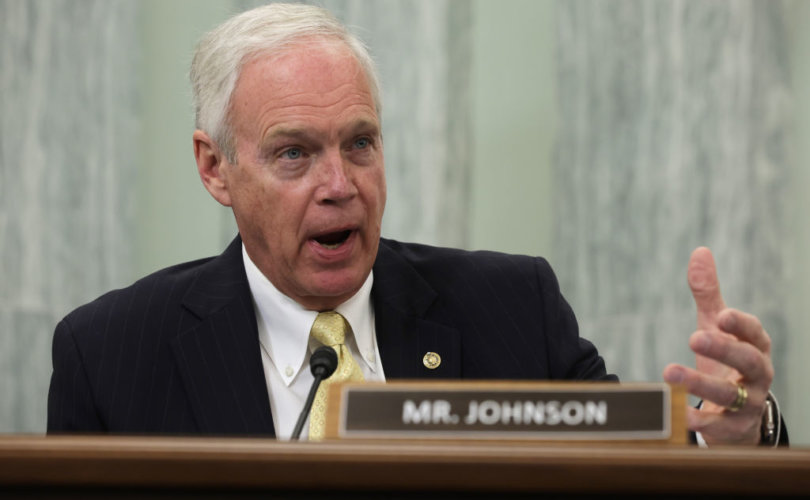 WASHINGTON, D.C. (LifeSiteNews) — U.S. Sen. Ron Johnson (R-WI) is backpedaling on his apparent support for a Democrat bill to codify forced recognition of same-sex “marriage” and open the door to federal recognition of polygamy, now suggesting that it would require changes to earn his consideration.

The most surprising of those reported votes was Johnson, who said that while the bill was “unnecessary” and a Democrat effort to “further divide Americans,” he “see[s] no reason to oppose it.” He added later that same-sex “marriage” is “pretty well settled law,” and that if the U.S. Supreme Court was to overturn Obergefell v. Hodges, the 2015 precedent that forced all 50 states to recognize such unions, “you would really disrupt people’s lives.”

Johnson added to the confusion last week when he told HuffPost’s Igor Bobic that while he continued to “see no reason to oppose it” (despite outlets such as LifeSite informing his office of the bill’s polygamy implications), he “wouldn’t call [his position] support.”

This Tuesday, however, Johnson told Axios, “I’ve never said I would support it. I said I didn’t see a reason to oppose it.” The next day, he told the Milwaukee Journal Sentinel that “there are a lot of people with reasons and very legitimate issues in terms of religious freedom. I think that needs to be considered and addressed.”

Baldwin’s office says that she and Collins are working on making the bill more appealing to moderate Republicans by “adding language that provides more clarity about what the legislation does not do […] It will not take away any religious liberty or conscience protections.”

Johnson did not commit to backing the amended version, saying only that “we’ll see what they come up with and we’ll see if they can provide adequate protection.”

— Article continues below Petition —
Parents' Pledge: We will pull our children out of explicit sex-ed classes
Show Petition Text
3957 have signed the petition.
Let's get to 4000!
Thank you for signing this petition!
Add your signature:
Show Petition Text

“I’m pleased that we don’t have a definite yes from the senator,” she told the Journal Sentinel. “I do think that it’s always good for elected officials to hear from their constituents, and I know that Senator Johnson did hear from a significant number of people in Wisconsin. We’re cautiously optimistic that if this bill hits the Senate floor that Senator Johnson will do the right thing and not support this redefinition of marriage.”

While religious liberty protections might address some concerns about the bill (depending on the final language), they would not resolve conservatives’ core objections to it: codifying an activist judicial precedent, formally endorsing a conception of marriage fundamentally at odds with the values of the conservative base, and opening the door to a future establishment of polygamy.

Johnson’s office did not respond to a request for comment on LifeSite’s original July 22 report. On July 31, a spokesperson said his office would get back to LifeSite regarding the July 29 follow-up; LifeSite will update this story upon reply.

Axios has since quoted Romney as expressing reservations about the bill’s religious liberty ramifications, with Tillis now saying that he does not believe the bill will clear the Senate “in its current form,” and that an amended version would “have to take another trip back over to the House.”