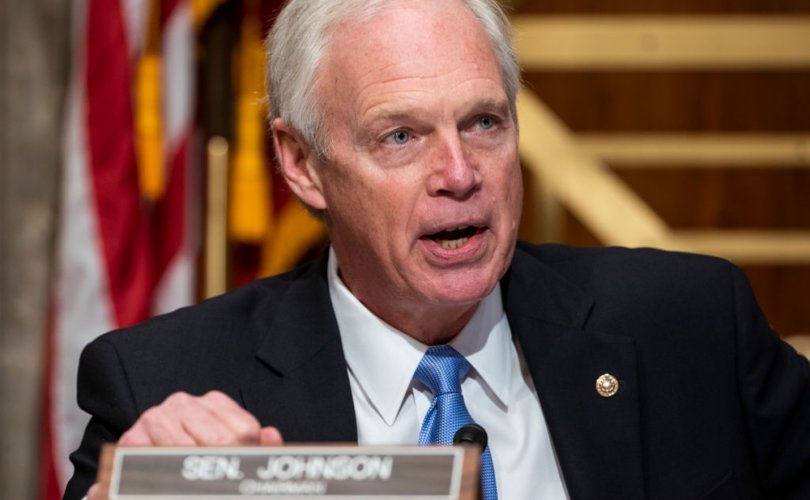 Republican Sen. Ron Johnson of Wisconsin argues with Democratic Senator from Michigan Gary Peters during a hearing to examine claims of voter irregularities in the 2020 election on December 16, 2020.Jim Lo Scalzo-Pool/Getty Images

During a stop at the Kenosha County Fair last week, the Wisconsin lawmaker argued that efforts to enshrine gay marriage in federal law weren’t needed since Obergefell v. Hodges, the 2015 Supreme Court precedent that forced all 50 states to recognize the unions, would “never be overturned,” Newsweek reported.

Sen. Johnson has generated support from the right for challenging the COVID-19 response, raising the alarm about the Biden family’s business dealings with China, and maintaining a 100% pro-life voting record. However, he recently alarmed conservatives when he said in July he wouldn’t oppose the pro-gay marriage “Respect for Marriage” bill, which was passed by the U.S. House of Representatives last month.

Sen. Ron Johnson (R-WI) tells WISN-TV that a bill to protect same-sex marriage is “completely unnecessary” because “the decision on gay marriage will never be overturned” and precedent is “decisive.”

He says it differs from Dobbs because “it would impact millions of people.” pic.twitter.com/0IG2VKsZxQ

In a July 21 statement to the Milwaukee Journal Sentinel, Johnson said he thought it unlikely the Supreme Court would overturn precedent on gay marriage, and characterized the bill as “another example of Democrats creating a state of fear over an issue in order to further divide Americans for their political benefit.”

“[E]ven though I feel the Respect for Marriage Act is unnecessary, should it come before the Senate, I see no reason to oppose it,” Johnson said at the time.

The Wisconsin Republican appears to be distancing himself from the measure in more recent statements, however, as Democrats push to get the bill past the Senate ahead of the 2022 midterm elections.

Newsweek pointed out that in a separate statement to Axios earlier this month, Johnson clarified he wasn’t committed to voting for the bill.

“I’ve never said I would support it,” he told Axios. “I said I didn’t see a reason to oppose it.”

On Monday, Politico observed that Johnson, who is up for re-election in November, is now joining fellow Senate Republicans in pushing for the bill to be amended before committing to supporting it.

“During the time he’s been back in Wisconsin over recess, he has spoken with a number of constituents who have concerns about the bill and the risk it may pose to religious liberty,” Johnson spokesperson Alexa Henning told Politico this week. “He is working with other senators on an amendment to try and remedy those concerns.”

Last week, Johnson told WISN-TV that he’s working on an amendment to address religious liberty protections in relation to the bill in hopes it could “fix” what he called a “legitimate concern” regarding the effects of the legislation.

The measure in question, HR 8404, would federally recognize the union between two men or two women as “marriage,” and even compel the federal government to recognize polygamy if approved by any state.

It’s unclear whether Democrats will scrape up enough Republican support to pass the bill in the divided U.S. Senate.

In July, just five Republican senators publicly committed to or implied supporting the bill, half the number needed by Democrats to clear the Senate’s 60-vote filibuster threshold.

To date, most Republicans have kept their voting plans close to the vest. However, Axios reported that the bill’s sponsors, Wisconsin Democratic Sen. Tammy Baldwin and Maine Republican Sen. Susan Collins, are collaborating in a bid to “build more support with Republicans,” Baldwin’s office told the outlet.

According to the report, Collins and Baldwin are hashing out plans to provide “more clarity that the legislation would not take away any religious liberty or conscience protections.”

Scoop: Senators are discussing changes to the gay marriage bill – to clarify that it wouldn’t infringe on religious liberty – in order to get 10 Republicans on board. https://t.co/AdFFTK5Azm

Utah Republican Sen. Mike Lee is drafting his own amendment, which his office said would specifically bar “the federal government from discriminating against persons based on their sincerely held religious beliefs or moral convictions about marriage,” Politico noted.

The bill, which gained 47 Republican votes in the House last month, has drawn criticism from conservatives who argue the codification of gay and polygamous marriage cannot help but run afoul of many Americans’ moral and religious convictions.

Last month, LifeSite’s Calvin Freiburger pointed out that there “is a direct causal line from surrendering marriage to the following years’ assaults on religious liberty and today’s all-out war on gender distinctions.”

“‘Sex doesn’t matter to marriage’ was the starting point on the path to ‘sex doesn’t matter to anything,’ and cutting children’s best interests out of society’s understanding of marriage was a predictable precursor to pursuing adult gratification at the expense of child welfare in even more destructive ways,” he wrote.