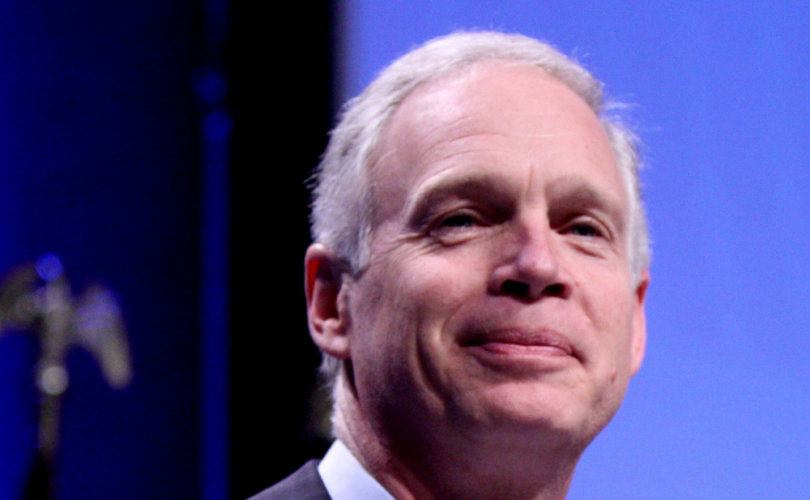 Stop Federal Lawmakers From Forcing Same-Sex ‘Marriage’ on the States! Tell your Senators to vote NO.

WASHINGTON, D.C. (LifeSiteNews) — Republican Sen. Ron Johnson of Wisconsin alarmed conservatives Thursday by indicating that he may support a Democrat bill that would not only codify forced recognition of same-sex “marriage” in federal and state law, but obligate the federal government to recognize polygamous unions should a state choose to legalize them.

In a statement to the Milwaukee Journal Sentinel, Johnson said he deemed an overturn of Obergefell v. Hodges, the 2015 Supreme Court ruling HR 8404 is meant to codify, unlikely, and therefore called the bill “another example of Democrats creating a state of fear over an issue in order to further divide Americans for their political benefit.”

However, “even though I feel the Respect for Marriage Act is unnecessary, should it come before the Senate, I see no reason to oppose it,” Johnson added.

Wisconsin Family Action president Julaine Appling, whose organization is urging members to tell Johnson to oppose the bill, adds that it “lays a foundation for the IRS or other federal agencies to strip tax-exempt status from religious non-profits that do not affirm same-sex marriage. If RMA is passed, it would represent a clear statement that Congress believes opposition to same-sex marriage is against public policy.”

“That could allow the IRS to point to the RMA, to Supreme Court cases recognizing same-sex marriage, and to numerous administrative actions from the Biden Administration (and the Obama Administration before it) as evidence that all three branches of the federal government uniformly believe that everyone—both government entities and private individuals and organizations—should recognize same-sex marriages and grant them the same rights and benefits as opposite sex couples.” she warned. ‘The IRS could argue that an organization that fails to do so should not be tax-exempt, which presumably would or could include churches.”

LifeSiteNews reached out to the senator’s office comment on his position, including whether he was aware of the bill’s ramifications for polygamy. Johnson, who in May worried conservatives with comments implying passivity on abortion once the issue was returned to the states, did not respond.

READ: 14 Catholic Republicans in the US House voted to codify same-sex ‘marriage’ into federal law

47 House Republicans joined every House Democrat in voting to pass HR 8404, with the blessing of House Republican leaders Kevin McCarthy and Steve Scalise, and Senate Republican leader Mitch McConnell has declined to stake out a public position on the legislation until the chamber’s Democrat majority leader, Chuck Schumer, announces a decision on bringing it to the floor. As speculation continues on whether Schumer can find ten GOP senators to join Democrats to pass it, the bill’s ramifications for polygamy have gone largely unmentioned.

So far, Johnson is the fifth Senate Republican to either commit to or imply supporting the bill. Unless his position changes, Democrats only need to convince five more Republicans to join them in sending it to President Joe Biden’s desk.

LifeSiteNews is currently running a VoterVoice campaign attempting to make Republican senators aware of grassroots opposition to HR 8404, and vote against it accordingly.

Stop Federal Lawmakers From Forcing Same-Sex ‘Marriage’ on the States! Tell your Senators to vote NO.