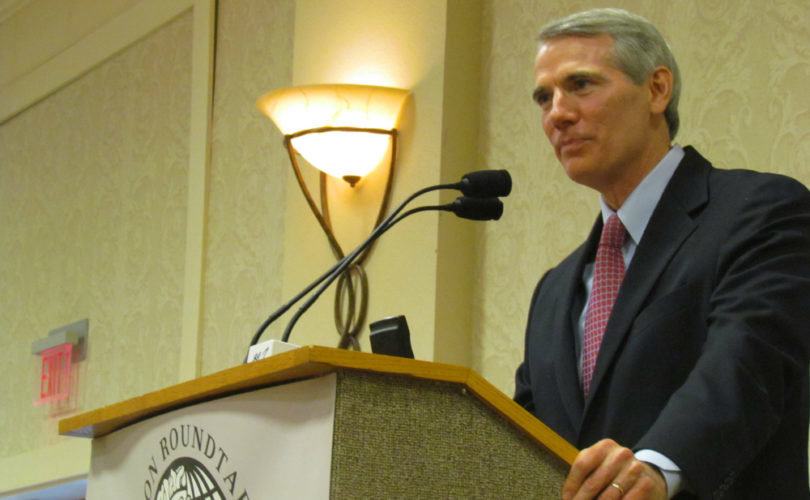 U.S. Sen. Rob Portman, R-OH, recently published a list of high-profile endorsements for next year’s re-election bid.  Conspicuously missing from the list, however, were a number of influential social conservatives who say his flip-flop on the issue of same-sex “marriage” cost him their support.

Portman, 59, advocated true marriage between one man and one woman until his son, Will, came out as homosexual.  After that, Portman changed his tune, announcing in 2013 that he was abandoning his faith-based objection to gay “marriage” in favor of doing what he felt would make his son happy.

“[Previously], my position on marriage for same-sex couples was rooted in my faith tradition that marriage is a sacred bond between a man and a woman,” Portman wrote at the time.  “Knowing that my son is gay prompted me to consider the issue from another perspective: that of a dad who wants all three of his kids to lead happy, meaningful lives with the people they love, a blessing Jane and I have shared for 26 years.”

Now, with Portman’s campaign for a second term in full swing, pro-life and pro-family activists are warning Ohio politicians against backing Portman, saying his position on same-sex “marriage” will taint anyone who gives him their support.

“My advice to any true conservative office holder is to say NO on principle, right up front, due to Portman's choice to go against the GOP national pro-marriage platform,” said Molly Smith, president of Cleveland Right to Life, in a statement. “Remember, the marriage issue is one of the 'big two' for social conservatives. You don't need to pick up Portman's baggage.”

So far, a significant number of legislators have heeded Smith’s call.  According to the Cincinnati Enquirer, one Republican state senator, 11 Republican Ohio House members and 11 GOP county chairmen have refused to endorse Portman.  One of those is Rep. John Becker, R-Union Township, who told the Enquirer that Portman’s reversal on the same-sex “marriage” issue cost him his support.

“Senator Portman and I go back a long way,” said Becker. “However, in recent years our values have become divergent to the point that I can no longer offer Senator Portman my endorsement.”

Rep. Doug Green, R-Mount Orab, echoed Becker’s sentiments in an interview with the Enquirer, telling the paper that he’s struggling with the idea of endorsing Portman due to “the obvious: the same-sex marriage issue.”

Ray Warrick, chairman of the Warren County Republican Party, told the Enquirer that Portman’s position on same-sex “marriage” was also a factor in his decision not to endorse the senator. Portman’s “flip-flop on gay marriage doesn't sit well with social conservatives in Warren County,” Warrick said.

Not all self-styled social conservatives have abandoned Portman, however.  On the list of Portman’s endorsements is Michael Gonidakis, president of Ohio Right to Life, who told the Daily Beast after Portman’s flip-flop that the statewide organization has “consistently supported Rob Portman in his career, and the senator has a 100 percent pro-life record.”

The National Right to Life Committee went so far as to disown the Cleveland chapter over its criticism of Portman, saying the controversy over same-sex “marriage” is a “non-right-to-life issue.”

But Smith defended both her organization’s stance against same-sex “marriage” and its distrust of Portman.   “If [Portman’s] daughter was to come home and say she had just had an abortion, would there be the same change on that?” Smith asked at the time.

Cleveland Right to Life board member Jerry C. Cirino backed Smith’s opinion. “We know it is not only important to protect the rights of a child to be born…we should also care about the child after they are born,” Cirino told LifeSiteNews. “This is about supporting the family in America and any politician, including Portman, who supports the break-up of the American family and supports the denial of a mother and father for children has forfeited the right of support and endorsement of the prolife movement.”