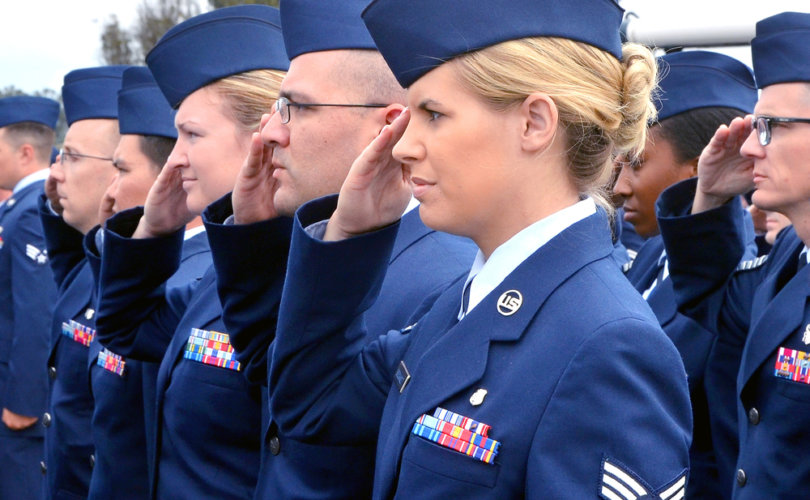 WASHINGTON, D.C. (LifeSiteNews) — The U.S. Senate passed a version of the National Defense Authorization Act (NDAA) that includes an amendment blocking the military from dishonorably discharging servicemen for refusing to take the experimental COVID-19 jabs.

The prohibition was added to the annual defense bill in the form of a rider introduced by Republican Sen. Roger Marshall of Kansas, a former Army doctor.

The Kansas Senator said in a statement the provision is designed to “prevent Joe Biden from dishonorably discharging service members for choosing to not get the COVID vaccine,” explaining that “a dishonorable discharge treats our heroes as felons.”

“[O]ur American heroes deserve better,” Marshall said, adding he was “proud the NDAA passed the Senate” with his “amendment to ensure service members will be protected from a dishonorable discharge for choosing not to get the COVID vaccine.”

The legislation was introduced in response to the Pentagon’s August decision to order all U.S. service members to get inoculated against COVID-19, with Secretary of Defense Lloyd Austin directing the secretaries of all military departments to “immediately begin full vaccination of all members of the Armed Forces” and “impose ambitious timelines for implementation.”

“With the support of the President, I have determined that mandatory vaccination against the coronavirus disease 2019 (COVID-19) is necessary to protect the Force and defend the American people,” Austin said.

The prohibition against dishonorably discharging servicemen for simply refusing to take the injections comes after the U.S. Air Force on Monday became the first branch of the military to begin discharging its unvaccinated members, terminating 27 airmen who disobeyed orders by refusing to get the abortion-tainted shots.

The Air Force has not stated whether the service members were dishonorably discharged or terminated under an honorable or general discharge.

In a December 15 report, The Epoch Times noted that Marshall’s amendment “would not protect men and women in the military from being discharged” honorably, but instead would simply “protect them from the social stigma of a dishonorable discharge.”

Marshall’s rider is separate from a previous bill introduced by Marshall along with Republican Sens. Ted Cruz of Texas, James Lankford of Oklahoma, and Tommy Tuberville of Alabama in September, which The Epoch Times observed would have accomplished largely the same purpose as Marshall’s successful rider.

Promoting the legislation, Sen. Cruz had called any efforts to dishonorably discharge military members for failing to take the experimental jab “an insult to our servicemen and women who have served with honor.”

While defenders of vaccine mandates are quick to point out that the military has long required soldiers to vaccinate against a range of diseases, the fact remains that previous vaccines were subjected to far more evaluation and development time before being put into widespread use than the Pfizer, Moderna, or Johnson & Johnson COVID shots were during their accelerated clinical trials.

The military’s sweeping vaccine mandate is one of the only federal jab mandates that has not been blocked by federal courts. As of this date, three of the Biden administration’s top-down jab mandates have been halted in the courts, including a broad requirement that would have used the Occupational Safety and Health Administration (OSHA) to force businesses with 100 or more employees to get the experimental drugs or face stiff fines.

Military members and federal employees, however, are still under a federal mandate to get the jabs, leading some to express concern the mandates could cause a weakening of the military’s combat readiness and ability to respond to rapidly escalating geopolitical threats.

Meanwhile, Sen. Marshall’s rider to the NDAA protecting military members from dishonorable discharge is not the only time the annual defense bill has made headlines this year.

The crucial piece of legislation sparked a national debate in July when Senate Armed Services Chair Jack Reed wrote a draft of proposed changes adding a controversial provision that would have forced American women ages 18-26 to register for the draft.

No. You are not drafting our daughters. https://t.co/rm7yml9w0u

Expected to pass, the provision was abruptly stripped out of the bill earlier this month in a bid to generate greater Republican support for the overall defense package.