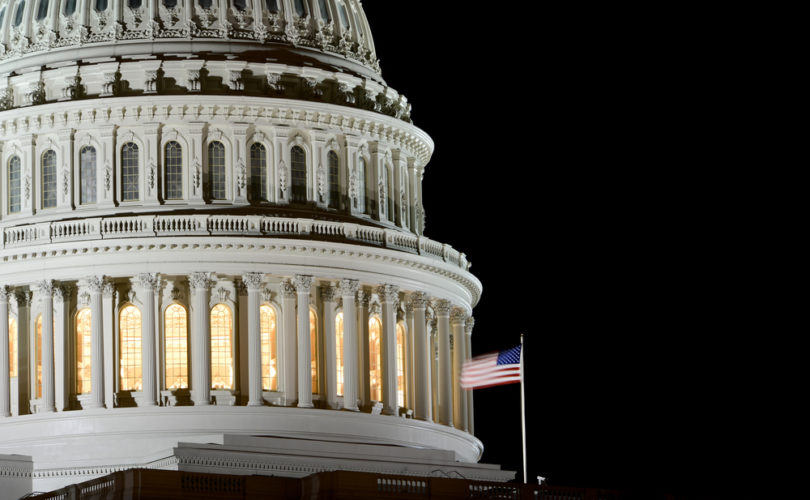 WASHINGTON, D.C., August 3, 2015 (LifeSiteNews) – Although a majority of Senators voted yes, a minority of Democrats – joined by one Republican – managed to block an effort to defund Planned Parenthood this evening.

The final, 53-46 vote on the bill from Iowa Republican Joni Ernst fell largely along party lines.

Because Senate Majority Leader Mitch McConnell restored the use of the filibuster, stand-alone bills such as this one must have at least 60 votes to pass cloture.

Had the bill passed, President Obama promised through spokesman Josh Earnest to veto the bill. Overriding a veto requires 66 votes, a threshold no Hill watcher could envision.

Since the Senate will break for summer recess at the end of the week, some in the pro-life community are calling for immediate action.

“Now that we have everyone on record, the Senate GOP must attach this bill to a must-pass piece of legislation and get this bill to the president’s desk,” said Kristan Hawkins, president of Students for Life of America (SFLA).

Other pro-life advocates, while disappointed by the outcome, say that the vote shows the growing strength of their movement. “When the Senate last voted to defund Planned Parenthood” in 2011, “only 42 voted for it,” Marjorie Dannenfelser, the president of the Susan B. Anthony List, said following the vote.

Ultimately, one Republican – Sen. Mark Kirk of Illinois – voted to maintain funding for the abortion provider, despite a string of shocking and progressively more disturbing videos revealing Planned Parenthood's role in harvesting and selling the body parts of aborted babies.

Meanwhile, two pro-life Democrats – Joe Manchin of West Virginia and Joe Donnelly of Indiana – gave the legislation a bipartisan coalition. Donnelly's vote was a closely held secret until it was cast, and came after aggressive lobbying by Indiana Right to Life. “Hoosiers have long been concerned about their tax dollars going to an organization that dismembers hundreds of thousands of American children each year,” said the group's president and CEO, Mike Fichter. “We extend our thanks to both of our senators, and especially to Sen. Coats who was an original cosponsor on this legislation.”

Another senator who prominently campaigned as a pro-life Democrat, Bob Casey of Pennsylvania – the son of the former pro-life Governor Robert P. Casey – voted no.

Several Republicans who had not publicly stated their position before the roll call ultimately voted against continuing to fund Planned Parenthood, including Susan Collins of Maine and Lisa Murkowski of Alaska.

Planned Parenthood President Cecile Richards cast the vote as the latest partisan assault in the war on women. “This is all about politics,” she told MSNBC's Andrea Mitchell today. “I think it's really important to understand that all of this is about denying women access to health care in this country and the vote tonight will actually be about denying women access to birth control, cancer screenings, testing and treatment for many women where Planned Parenthood is their only doctor.”

But members of both parties have said that federal funding of women's health care should be redirected from the nation's largest abortion provider to community health centers, which outnumber Planned Parenthood facilities 13-to-one. “Supporters of Planned Parenthood have expressed concern that women will not have access to medical care. We share that concern which is why we are calling on Congress to reallocate the funding to Community Health Centers,” said Kristen Day, executive director of Democrats for Life of America (DFLA). “There are 9,000 Community Health Center sites located in almost every single Congressional District. They vastly outnumber the 700 Planned Parenthood facilities and provide fuller services for families. We want to ensure that women still have access to the services and support they need.”

Sen. Manchin echoed this in a statement released shortly before today's vote. “I do not believe that taxpayer money should be used to fund” Planned Parenthood, he said. “Instead those funds should be sent to other health care providers, including community health centers, which provide important women’s healthcare services. While my vote is one that will prevent taxpayers dollars from going to Planned Parenthood, I will remain committed to ensuring that all women in West Virginia and America receive the health care services they need.”

Tony Perkins, president of the Family Research Center, agreed that “ending taxpayer funding to Planned Parenthood will free up over half-a-billion dollars a year to go to a myriad of health-care service providers that provide a broader range of health services than Planned Parenthood ever has.”

“While Americans are divided over abortion, we see common ground quickly forming to ensure Americans aren't forced to send their tax dollars to an abortion giant that sifts through aborted babies' parts to see which organs can be salvaged and sold,“ Perkins added. “Trafficking baby body parts is only the latest scandal for an organization that also faces allegations of covering up sex trafficking, engaging in sex selection abortion, and even violating the law criminalizing partial-birth abortion.”

Planned Parenthood receives in excess of half-a-billion dollars each year, more than 40 percent of its operating budget, from taxpayer revenues at the federal, state, and local level.

The Senate is unlikely to take additional action in the waning days of this session. Some instead are already focusing on next autumn's presidential election.

“With Hillary Clinton and other national Democratic leaders doubling down on their support for unlimited abortion on-demand, up until the moment of birth, paid for by taxpayers, voters and pundits should expect to see the abortion issue play a major role in the upcoming general election,” Dannenfelser said. She added that the pro-life movement “will work hard to ensure voters do not forget who fails to stand for the most innocent among us.”

Dannenfelser added that the remaining eight to 10 videos that the Center for Medical Progress says it is poised to release over the coming weeks will go a long way toward changing public opinion against the abortion industry. “As more videos are made public, outrage will surely grow.”

Senate to vote on defunding Planned Parenthood before August recess