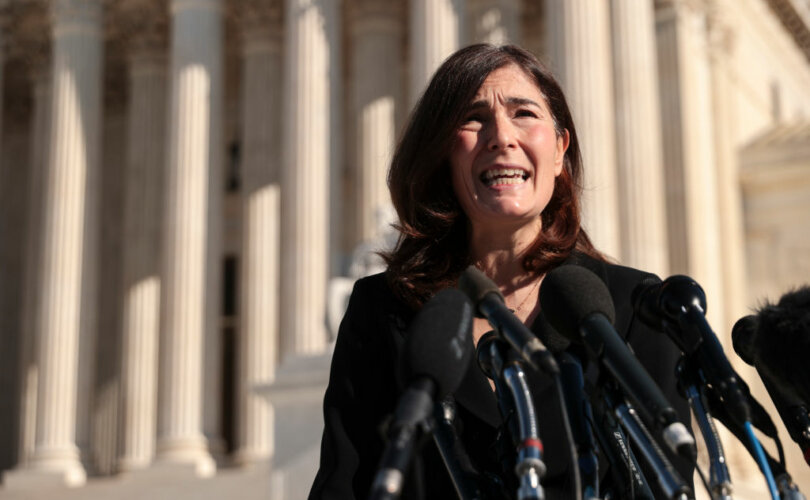 WASHINGTON, DC - DECEMBER 01: Julie Rikelman, Senior Litigation Director at the Center for Reproductive Rights, who represents the Jackson Women’s Health Organization, speaks to the media after arguing before the U.S. Supreme Court in Dobbs v. Jackson Women's Health, a case about a Mississippi law that bans most abortions after 15 weeks, on December 01, 2021 in Washington, DC. Chip Somodevilla/Getty Images

WASHINGTON, D.C. (LifeSiteNews) — In a victory for the pro-life cause, the U.S. Senate Judiciary Committee blocked the appointment of the attorney who failed to convince the Supreme Court to stop Mississippi’s abortion law.

Julie Rikelman with the Center for Reproductive Rights was the attorney behind a failed challenge to Mississippi’s 15-week abortion ban that led to the reversal of Roe v. Wade in the Dobbs v. Jackson case.

The panel deadlocked Thursday 11-11 on the vote to advance Rikelman’s confirmation. Senate Majority Leader Chuck Schumer must now get 51 votes on the floor of the U.S. Senate to get Rikelman confirmed to the First Circuit.

“Your views on abortion are not middle of the road, they’re not views that most people in their typical lives encounter,” Senator Ted Cruz told Rikelman. “You believe for example that abortion ought to be entirely legal right up until the moment of birth including the ninth month of pregnancy, is that correct?”

She denied that she ever took that position as a legal “advocate” and declined to share her personal views.

She has, however, shared her personal views in the past before being nominated – and that includes calling life-saving pregnancy resource centers “faux clinics.”

Her 2018 opinion piece in the Huffington Post criticized the Supreme Court for ruling in NIFLA v. Becerra against California in its attempt to force pregnancy resource centers to promote abortion.

“Reproductive rights advocates have long been concerned that CPCs use dishonest tactics, like internet deception and falsely presenting staff as medical providers, in order to trick women who are seeking abortion or contraception services into visiting their facilities,” she wrote.

Senator Josh Hawley (R-MO) confronted her on what she wrote about the “faux clinics” claim, since many PRCs employ medical professionals. She again referred to her work as an “advocate” when asked to explain her claim about the pro-life centers, which provide free prenatal care, free diapers, free ultrasounds, and other resources.