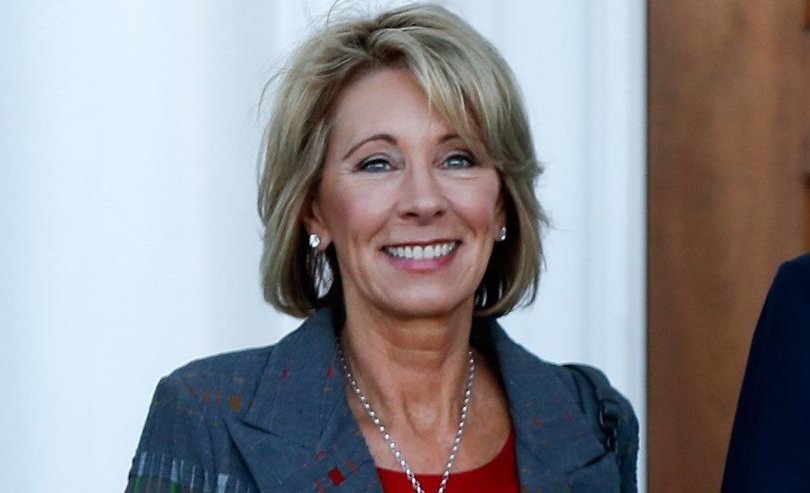 The nomination now proceeds to a floor vote in the GOP-controlled Senate where it is highly likely that DeVos will prevail.

DeVos has been praised by the National Right to Life Committee as a “pro-life activist,” but her comments at the hearing on LGBT issue raised serious concern among social conservatives.

Liberals assailed DeVos’ testimony as ill-informed, and have demanded that she release her taxes, which she refused. Both the National Education Association and the American Federation of Teachers urged Democrats to stop DeVos’ nomination.

Democrats complained at the confirmation hearing that the initial 12-11 vote in favor of DeVos was invalid because Sen. Orin Hatch, R-UT, was not present and voted “yes” by proxy. Education Committee Chairman Sen. Lamar Alexander, R-TN, said the complaint about the vote was too late, and ultimately called for a re-vote with Hatch present that also resulted in a 12-11 vote to confirm DeVos.

President Trump has described DeVos as a “brilliant and passionate education advocate. … Under her leadership we will reform the U.S. education system and break the bureaucracy that is holding our children back so that we can deliver world-class education and school choice to all families.”

DeVos, a 58-year-old Michigan native, has said, “The status quo in education is not acceptable. Together, we can work to make transformational change that ensures every student in America has the opportunity to fulfill his or her highest potential.”

DeVos is chairman of the American Federation for Children, whose mission is to “improve our nation’s K-12 education by advancing systemic and sustainable public policy that empowers parents, particularly those in low-income families, to choose the education they determine is best for their children.”

At today’s hearing, Sen. Al Franken (D-MN) assailed DeVos as “uniquely so unqualified to be head of a department that is crucial for our children in this country.”

Sen. Alexander dismissed the Democrats’ pleas for more information from DeVos, noting that Democrats in a recent retreat already said in advance that they would vote unanimously against DeVos.

“Betsy DeVos is the most questioned [nominee for] Education Secretary,” Sen. Alexander said, contrasting the proceedings with prior Senate hearings over Obama’s education chief.

Although liberals targeted DeVos more than any other cabinet nominee, she has been championed by conservatives and Republicans.

“I think she’ll be an excellent Education Secretary, because she cares about children,” Sen. Alexander said at today’s hearing. He extolled her support for charter schools—reminding the other Senators that they are public schools.

Alexander said he hoped that DeVos’ advocacy of school choice would help poorer students gain access to quality schools, like children in wealthier school districts. He compared school choice vouchers for K-12 schools to the G.I. bill, which helped millions of American veterans to attend colleges.

Rep. Justin Amash (R-Mich.) heralded DeVos’ nomination: “Betsy is intelligent, creative, experienced, and passionate about reforming education. I look forward to working with her to empower parents and local communities, advance school choice and competition, protect the right of homeschooling, and stop federal mandates and harmful initiatives like Race to the Top and Common Core.”

One byproduct of DeVos' hearings and the unprecedented media attention she has received was the revelation that the Michigan Republican is favorable to LGBT “rights.”

Although the DeVos family was a major funder of the pro-traditional-marriage Michigan constitutional amendment, under questioning it appears Betsy DeVos herself hardly squares with the LGBT criticism that she represents dark “anti-gay” forces.

In response to a hostile question at her Senate confirmation hearings by Sen. Al Franken (D-MN) about her (family's) past donations to Focus on the Family, which supports pro-heterosexual change therapy for homosexuals, DeVos used the euphemism favored by LGBTQ activists.

“I fully embrace equality,” she said, “and I believe in the innate value of every single human being, and that all students no matter their age should be able to attend a school and feel safe and be free of discrimination.”

Many pro-family advocates would echo such sentiments and argue that all students can be kept safe without LGBT-specific education policies.

She also distanced herself from the DeVos family's grants to Focus on the Family, a popular evangelical organization that advocates for the rights of the unborn and was strongly involved in the battle to preserve marriage as between a man and a woman.

While LBGT groups have excoriated DeVos for supporting “anti-gay” causes, the New York Times reports that DeVos has a history of pro-homosexual actions, including helping get signatories to a 2015 liberal Republican amicus brief supporting the legalization of same-sex “marriage.”

The Times also reported an incident in which as head of the Michigan Republican Party, DeVos “came to the aid of a [biologically male] transgender woman who wanted to use the women's restroom at a call center, upsetting some of the other women there.”