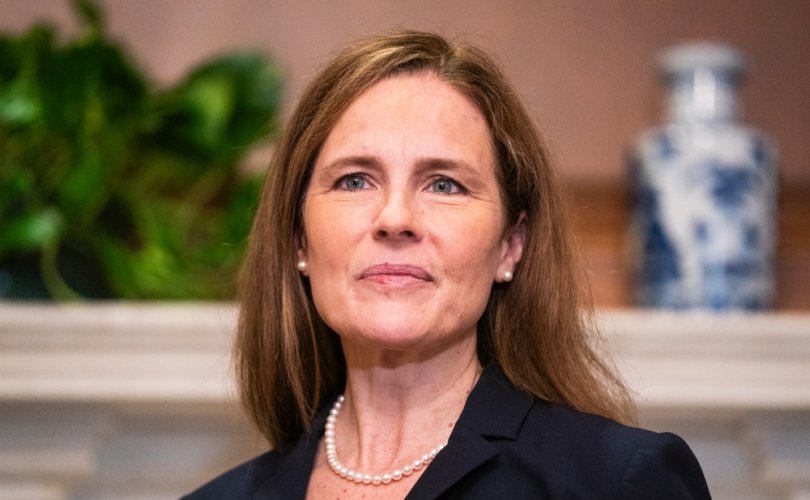 WASHINGTON, D.C., October 26, 2020 (LifeSiteNews) – The United States Senate voted 52 to 48 Monday night to confirm Judge Amy Coney Barrett as the next Associate Justice of the United States Supreme Court, marking a rightward shift in the federal judiciary’s balance of power.

President Donald Trump selected Barrett, his third appointee to the nation’s highest court, to replace left-wing Justice Ruth Bader Ginsburg following her death last month. Senate Republicans faced intense pressure from the Right to fill the vacancy prior to the November presidential election, amid intense opposition from the Left, which demanded the seat be left empty so whoever wins the election could fill it.

A Catholic mother of seven widely regarded as a pro-life originalist, Barrett was a member of Notre Dame’s Faculty for Life group, is reported to have signed another letter published by Becket Law criticizing the Obama administration’s contraception mandate, and signed a 2006 ad declaring “we…oppose abortion on demand and support the right to life from fertilization to natural death.” She has also written multiple articles critical of the stare decisis doctrine, which grants weight to past rulings’ status as precedent, regardless of whether they were rightly decided.

The final vote was 52 to 48 and as expected fell largely along party lines. Of particular interest were Republican Sens. Lisa Murkowski of Alaska and Susan Collins of Maine. Both are pro-abortion, but Murkowski voted to confirm Barrett, while Collins, who famously voted to confirm Justice Brett Kavanaugh two years ago, voted against her. In procedural votes on Friday and Sunday, Murkowski had voted against moving the confirmation process forward.

Vice President Mike Pence was ultimately not needed to cast a tie-breaking vote.

“The conservative women I have been visiting all across the country in our ‘Women for Amy’ Bus Tour cheer loudly for this historic milestone for women,” commented Concerned Women for America’s Penny Nance, calling Barrett “an inspiration to millions.”

“A conservative, constitutionalist, pro-life woman at the Supreme Court is why we voted for Donald Trump. We congratulate Justice Barrett, and we are praying for her and her family. The task ahead will be a difficult one, but we have full confidence in her abilities as a jurist.”

“I'm going to remember this day when Amy Coney Barrett, an accomplished woman in her own right, achieved the pinnacle of her profession while raising a family, embracing her role as a wife, and demonstrating that it's all possible without abortion. Her confirmation hearings were a testament alone to her astute legal mind, her compassion for others, and ability to fulfill her role as the next Supreme Court Justice. President Trump chose well and Amy Coney Barrett will hopefully remain on the Court for many decades, protecting the Constitution as it was written and protecting innocent life in all its beautiful stages. When she is sworn into the Court tonight, an unforgettable photo of her will be in our history books: one that depicts Amy Coney Barrett surrounded by her biggest supporters, her husband and children, pledging to interpret the law as it is written. She has done all of this by embracing her very femininity, not rejecting it.”

“Justice Barrett’s confirmation marks a turning point in the fight to protect unborn children and mothers,” said Marjorie Dannenfelser, president of the Susan B. Anthony List. “The American people can now see a glimmer of light at the end of a dark tunnel, when the Supreme Court may finally return to the people the ability to enact laws that reflect their values and save lives.”

Although it remains to be seen how some of the current Republican-appointed justices would rule on major issues such as Roe v. Wade, the replacement of Ginsburg with Barrett is widely recognized as a significant rightward shift for the Supreme Court, which conservatives hope will mitigate the damage to their causes should Trump lose to former Vice President Joe Biden last month.

At the same time, many on the Left have called for Biden to cancel out Barrett if he wins by “packing” the Supreme Court, or adding judges beyond its current nine members to create a new, left-wing majority. Biden has repeatedly refused to explicitly say whether he would answer such calls, but has said he wants to institute a “bipartisan commission of scholars” to brainstorm and propose unspecified “reforms” to the federal judiciary.

It has been reported that pro-life originalist Justice Clarence Thomas will administer the oath of office to Barrett later this evening at a White House ceremony.

First blind SCOTUS clerk: Barrett’s ‘brilliance is matched only by her compassion’

Barrett laments ‘cruel’ attacks that ‘are not only hurtful to me, but are hurtful to my children’