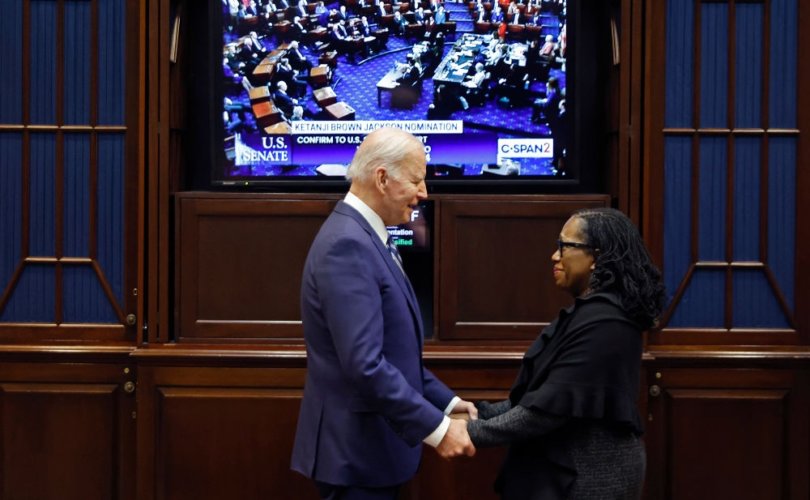 WASHINGTON, D.C. (LifeSiteNews) — The U.S. Senate on Thursday voted to confirm Biden-nominee Ketanji Brown Jackson to the Supreme Court of the United States after a contentious confirmation process in which Republican senators probed the former Circuit Court judge’s judicial record and slammed her allegedly lenient sentencing for child pornography offenders.

The Senate voted 53-47 on Thursday afternoon to confirm Jackson, with the help of left-leaning Republican Sens. Susan Collins of Maine, Lisa Murkowski of Alaska, and Mitt Romney of Utah.

Jackson will replace liberal, pro-abortion Justice Stephen Breyer on the Court, who announced his plans to retire earlier this year. Breyer, 83, has consistently voted with the Court’s liberals and repeatedly worked against pro-life legislation.

During confirmation hearings, which kicked off March 21, Jackson expressed gratitude for being nominated for the role and signaled her intention to follow in her predecessor’s footsteps.

“It is extremely humbling to be considered for Justice Breyer’s seat, and I know that I could never fill his shoes. But if confirmed, I would hope to carry on his spirit,” said Jackson, who worked as a law clerk for Breyer in 2000 when he ruled against a pro-life Nebraska law that would have banned gruesome partial birth abortions.

During confirmation hearings, Republican senators grilled Jackson over her judicial record and blasted her for refusing to define what a woman is and stating she doesn’t know when life begins.

Pro-life groups have warned that Jackson is radically pro-abortion, and abortion groups like Planned Parenthood and NARAL have welcomed her nomination.

Students For Life Action (SFLA) president Kristan Hawkins argued in a March 10 letter to the U.S. Senate that Jackson “would present a unique and profound threat to the work of the Pro-Life Generation.”

Before rendering their “nay” votes Monday, Republican senators took the opportunity to weigh in regarding Jackson’s nomination and explain their reasons for opposing her confirmation.

Republican Sen. Josh Hawley of Missouri, who previously blasted Jackson for allegedly going soft on sentencing child pornography offenders, suggested that the circuit court judge’s prior judicial record is “based on her policy and her philosophy,” adding, “I think on those core issues she is just dead wrong.”

Sen. Ted Cruz of Texas warned that Jackson will be “the most extreme and the furthest left justice ever to serve on the United States Supreme Court.”

Sen. Ted Cruz (R-TX): “If Judge Jackson is confirmed, I believe she will prove to be the most extreme and the furthest left justice ever to serve on the Supreme Court.” pic.twitter.com/CbdDn6pChA

Legacy media outlets have hailed Jackson’s confirmation as “historic,” emphasizing that she will be the first black woman to serve on the nation’s highest court.

Biden had made clear before nominating Jackson that he would exclude any candidates for the role who were not black women, a decision that drew bipartisan backlash. An ABC/Ipsos poll conducted in late January found that 76% of Americans wanted Biden to consider “all options” rather than select a nominee based predominately on considerations of race and sex.

Meanwhile, the confirmation of the abortion lobby-backed Supreme Court Justice comes just ahead of a much-anticipated ruling in Dobbs v. Jackson Women’s Health Organization, the crucial case on the Supreme Court docket which could result in the overturning of the federal “right to abortion,” established by the Court’s 1973 ruling in Roe v. Wade.

A decision is expected in Dobbs this summer.