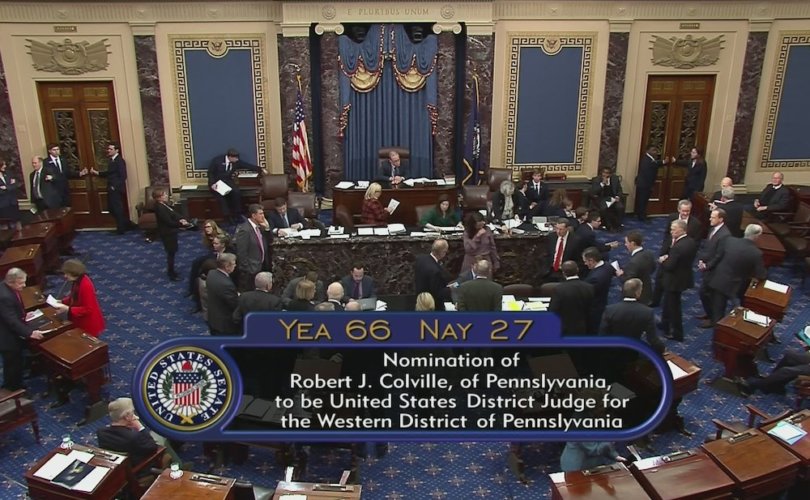 The Senate confirmed Allegheny County Common Pleas Court Judge Robert Colville to a judgeship with the Western District of Pennsylvania.

During the Obama years, Colville’s confirmation was blocked in part due to concerns over his answers on both abortion’s judicial precedent and the broader question of preborn human rights.

A 2009 voter guide from Planned Parenthood Advocates of Pennsylvania PAC describes Colville as “Endorsed by NOW” (the National Organization for Women) and says he “[a]ccepts Roe v. Wade, would not hesitate to enforce, recognizes and respects a woman's right to choose.”

In both initial and follow-up questions, Republicans in 2016 pressed him on his stated view of “Roe v. Wade and the case law that follows it as settled law and binding legal precedent.”

“Pursuant to Planned Parenthood v. Casey courts are required to determine whether a challenged law regarding abortion ‘imposes an undue burden on a woman's ability to make this decision,’” he answered. “I would faithfully abide by the precedent of the Supreme Court and the Third Circuit with respect to these issues.”

Colville added that his “views regarding the constitutionality of a court's consideration of the legislature's stated purpose of promoting women's health in the context you describe are neither matured nor established,” and refused to give a legal opinion on specific issues such as ultrasound laws or waiting periods.

Colville was also asked to elaborate on his answer to the question, “does an unborn child have human rights?” to which he had responded, “Probably yes, but only in certain respects and manners of speaking, not all. The real challenge and virtue is responsibly and charitably respecting the range of views on the issue.”

“I understood the questionnaire to be inquiring of my views, not so much as a judge but rather, as a human being, and not so much as an inquiry into a judicial or legal question but rather, as a moral, theological, or ontological inquiry,” he said. “In these, and other, regards I am unequipped, then and now, to speak authoritatively. My response attempted to allow for the possibility that if I thoughtfully considered and reflected on the range of perspectives held by many people I might likely discover that there is room for a wide range of reasonable views depending on how the terms were defined and how the question was approached.”

As for his reference to “respecting the range of views on the issue,” Colville said meant it “not as a judicial philosophy or legal position, but simply as a very brief human response to a profound and challenging question,” and that what mattered was that he would “faithfully abide by the precedent of the Supreme Court and the Third Circuit with respect to this issue and all issues that come before me.”

Those answers were enough to alarm Sens. Chuck Grassley (R-IA) and Thom Tillis (R-NC) at the time, and Colville failed to make it past the Senate Judiciary Committee. Yet President Trump renominated Colville in March, eventually leading to his Thursday confirmation. Twenty-four Republicans voted to confirm Colville while 27 Republicans voted against; no Democrats opposed his confirmation.

For most pro-lifers, Trump’s judicial nominees have been a high point of his presidency, yet concerns have persisted over whether their views are sufficiently vetted.

The Senate has also confirmed two jurists, Patrick Bumatay to the Ninth Circuit Court of Appeals and Mary Rowland to the U.S. District Court for the Northern District of Illinois, despite their memberships in pro-LGBT legal associations that have staked out left-wing stances on various issues. Even at the U.S. Supreme Court, questions remain over how Justice Brett Kavanaugh will rule on abortion, in light of his stated respect for Roe v. Wade’s status as precedent.