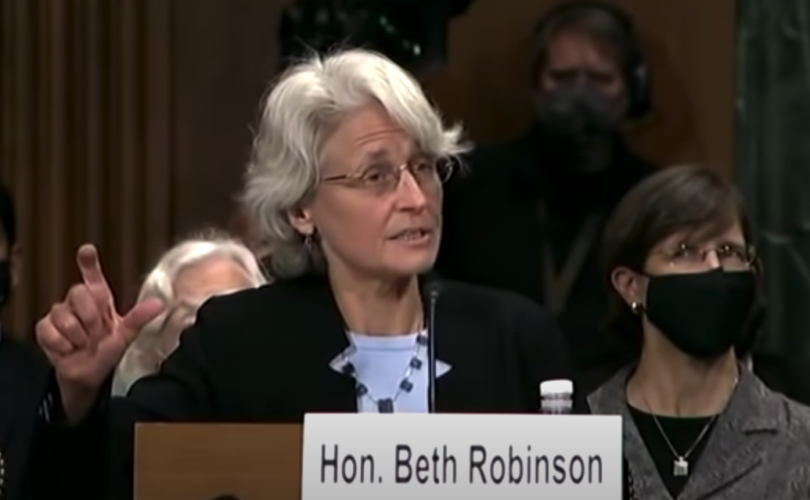 WASHINGTON, D.C. (LifeSiteNews) – The Senate this week confirmed a far-left, openly lesbian judge appointed by Joe Biden to a top federal court, despite her past involvement in a lawsuit targeting a Catholic family over their pro-life beliefs.

The Senate approved the confirmation of Beth Robinson, a Vermont Supreme Court justice, to the U.S. Court of Appeals for the Second Circuit in a 51-45 vote on Monday.

Two Republicans, Sen. Lisa Murkowski of Alaska and Sen. Susan Collins of Maine, voted in favor of Robinson’s confirmation. Sen. Lindsey Graham of South Carolina had joined Murkowski and Collins to advance the lesbian judge’s nomination earlier this year but voted against confirming her on Monday.

Robinson is Biden’s third nominee to the Second Circuit Court approved by the Senate in under six months. Her confirmation flipped the court to a 7-6 Democrat-appointed majority.

Robinson is known for her LGBT activism that helped spearhead legalization of same-sex “marriage” in Vermont. In 1999, she represented a group of homosexuals in a major case, Baker v. Vermont, that resulted in Vermont’s civil union law in 2000.

She later advocated for 2009 legislation that legalized homosexual “marriage” in the state while leading a pro-LGBT group, Vermont Freedom to Marry. Robinson was appointed to the Vermont Supreme Court in 2011 by Democrat Gov. Peter Shumlin, after backing Shumlin’s candidacy and serving as his general counsel.

During Robinson’s confirmation hearing in September, Republican senators particularly grilled her for her involvement in a lawsuit that targeted a family of pro-life, Catholic printers.

In the early 1990s, Robinson represented a Vermont woman who sued a print shop for refusing to make membership cards for a pro-abortion group, Vermont Catholics for Free Choice. The shop owners, devout Catholics, turned down the order because they said that they did not believe that Catholics could support abortion, which the Catholic Church has always condemned as murder. Robinson’s client, Linda Paquette, sued the family, the Bakers, claiming that they had illegally discriminated against her based on “creed.”

Republican Sen. Ted Cruz of Texas pointed out that Robinson denigrated the Bakers’ faithful Catholic beliefs as “invidious” and “pernicious” in a brief supporting Paquette.

“In your brief, you used strong and even incendiary language to describe the Baker family’s religious convictions, referring to their views that they did not wish to actively advocate for and promote abortion” Cruz said.

“Given that history of litigating and attacking an exercise of religious liberty, how might a litigant in the Second Circuit have any confidence that, as a judge, you would actually follow the law and, in particular, honor the religious liberty protections in the Constitution?” he asked.

Biden nominee Beth Robinson to be United States Circuit Judge for the Second Circuit has a deeply concerning record.

Robinson responded that “if the facts showed that the Bakers declined to print the placard because of their opposition to abortion rather than their belief that her strain of Catholic faith was wrong, then [Parquette] wouldn’t have a claim.”

Cruz said, “If anything, that makes it worse.”

Republican Sen. Josh Hawley of Missouri similarly pressed Robinson, telling her that he had “profound, profound concerns” about her nomination and that he was “troubled by your history of compelling individuals to express pro-abortion viewpoints against their religious convictions.”

Vermont’s senators praised Robinson’s confirmation, however, with socialist Sen. Bernie Sanders saying in a Monday statement that Robinson built her career “based on impartiality and fair application of the law,” despite her treatment of the Baker family.

Robinson is hardly the only far-left Biden nominee installed on the federal bench in recent days. Last week, the Senate confirmed Myrna Pérez, a left-wing “voting rights” activist who known for advocating against voter ID laws, to the Second Circuit Court of Appeals.

The Senate also voted 52-45 to confirm Tana Lin, former president of the board of directors of the ACLU of Washington, as a Washington federal judge last month. Senators Collins, Murkowski, and Graham voted for her confirmation.