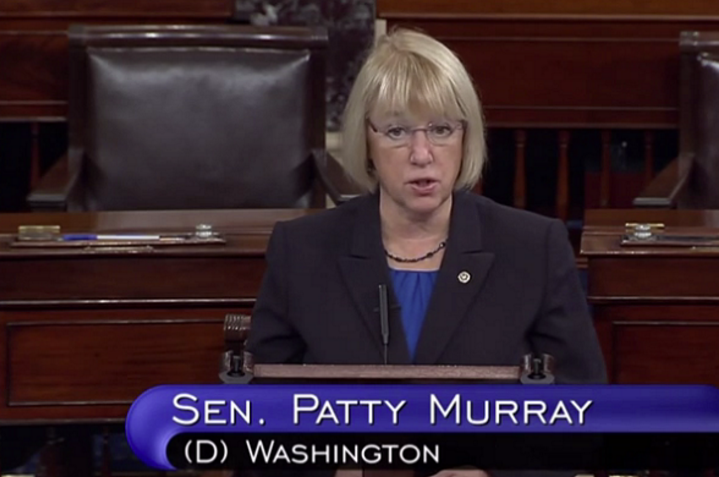 Murray has received over $50,000 in campaign contributions from Planned Parenthood, NARAL Pro-Choice America and the Center for Reproductive Rights.

November 12, 2015 (PregnancyHelpNews) — A resolution introduced in U.S. Senate that would honor the work of community-supported pro-life pregnancy centers was blocked from receiving unanimous support Tuesday, as Democratic Senator Patty Murray (Washington) denounced it as a “political football.”

Murray, who has received over $50,000 in campaign contributions from Planned Parenthood, NARAL Pro-Choice America and the Center for Reproductive Rights — including an $11,750 gift from Planned Parenthood in 2004 that totaled more than what radically pro-abortion House members Nancy Pelosi (D-California) and Debbie Wasserman-Shutlz (D-Florida) received combined — plus another $500,000 from EMILY's List, called the resolution a politically motivated attempt by Republicans to “stand in the way of progress.”

Her objection was in response to Senate Resolution 312, authored by Republican Senator Mike Lee of Utah, which would thank the nation's 2,500 community-supported pro-life pregnancy centers and medical clinics for their service to women and men in difficult pregnancy situations.

Mirrored in the House of Representatives by House Resolution 510, the motions would designate the week of Nov. 8 as “National Pregnancy Center Week.” More importantly, the resolutions would raise awareness of the life-saving work of nonprofit pregnancy centers and medical clinics, as well as nonprofit adoption agencies and maternity homes and commit their respective legislative bodies to “support the important work of pregnancy care and resource centers across the United States.”

“There is nothing divisive about this resolution that I’ve offered today,” Lee said on the Senate floor Tuesday. “Nothing divisive whatsoever. This simply seeks recognition of the great work that is performed by the men and women who staff these pregnancy centers. There is nothing about it that is a political football. Nothing about it that is designed to drive a wedge.

“If calling for recognition of these brave and noble men and women who serve people at pregnancy centers across the country—if that’s divisive, we’ve got significant problems.”

As the resolution points out, pregnancy help organizations that operate nearly exclusively on the basis of financial support from within their own communities are responsible for over 200,000 lives saved from abortion every year. Offering free, confidential services to women and men facing unexpected or difficult pregnancies, pregnancy help volunteers give over 5.7 million hours of uncompensated time to their communities each year.

Each day, an average of 6,500 U.S. citizens visit a pregnancy help location, totaling over 2.3 million served every year—just under the amount of customers visiting a Planned Parenthood on an annual basis.

The resolution would become the first passed at the federal level, following 24 state-level resolutions honoring pregnancy centers in 18 states, most recently in Colorado.

Despite the wide reach of pregnancy help organizations and the value they bring to the community at virtually no cost to taxpayers, Murray characterized the resolution celebrating their work as “another effort to pander to the extreme Republican base by using women's health and constitutionally protected rights as a political football.”

Murray's opposition follows suit with her Democratic colleagues at the state levels in Illinois and California, the latter of which recently passed a law requiring pro-life pregnancy help organizations to advertise for taxpayer-funded abortions. The California law, known as the “Reproductive FACT Act” is being challenged in court by local centers, as well as Alliance Defending Freedom, Pacific Justice Institute and National Institute for Family and Life Advocates (NIFLA).

“What we are seeing here is a radical disconnect between the pro-abortion agenda of the Democratic party and the very citizens these lawmakers have been elected to represent,” Jor-El Godsey, Vice-President of Heartbeat International, said. “Pregnancy help organizations exist because their local communities want them there and appreciate the heroic work they are doing each and every day. No woman should have to face a pregnancy alone, and they don't have to, thanks to these caring organizations and the compassionate people behind them.”

While the Senate version of the resolution has been delayed, the House Energy and Commerce Committee is reviewing its resolution. So far, Hartzler has been joined by 21 co-sponsors in the House after introducing the bill Nov. 3.

“The real measure of their significance isn’t in the words of a floor speech in the United States Senate, or in the outcome of a vote,” Lee said of pregnancy help organizations. “It’s in the thousands of lives they save from the pain of abortion every year. The millions of teachers, soldiers, nurses, friends and spouses whose lives and contributions to our communities we might never have known had it not been for the unassuming heroes down at the local pregnancy center, giving their time to keep the lights on, to answer the phones, and to help young women find the hope and the courage to choose life.

“I encourage anyone within the sound of my voice to read Senate Resolution 312, and they’ll discover that it’s not the least bit divisive. [It] doesn’t discuss anything that’s the least bit controversial.”