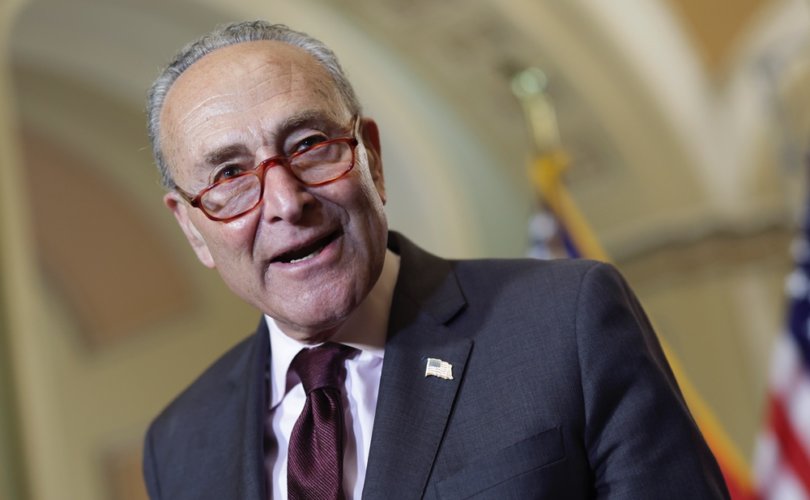 WASHINGTON, D.C. (LifeSiteNews) – The U.S. Senate voted 49-51 Wednesday on a Democrat bill to enshrine abortion on demand in federal law, forcing states to allow the practice to go on virtually unregulated, in response to the leak of a draft opinion indicating the Supreme Court might finally be ready to reverse Roe v. Wade.

Last week, Politico published a leaked draft of a majority opinion by conservative Justice Samuel Alito for Dobbs v. Jackson Women’s Health Organization, which concerns Mississippi’s 15-week abortion ban. The draft declares that “Roe was egregiously wrong from the start,” and therefore it is “time to heed the Constitution and return the issue of abortion to the people’s elected representatives.” In response, the Court announced the draft was authentic but “does not represent a final decision by the court or the final position of any member on the issues in the case.”

In response, Senate Democrat leaders scheduled another vote on the so-called Women’s Health Protection Act (WHPA), which has been repeatedly introduced over the years without success, but which Senate Majority Leader Chuck Schumer framed as an opportunity to put Republicans’ positions on the record.

The bill, which passed the House of Representatives in September and has the support of President Joe Biden, establishes a federal statutory right to perform and obtain abortions, including after fetal viability (under the broad cover of “health”), and specifically forbids states from subjecting abortion to ultrasound requirements (even though these are standard to discern fetal age), mandatory waiting periods, informed-consent requirements, and other health and safety regulations, such as admitting privileges.

The WHPA also protects so-called “webcam” abortions (i.e., dispensing abortion pills without an in-person doctor’s visit), forbids banning abortions on the basis of a baby’s race, sex, or disability, and forbids banning particular techniques such as dilation and evacuation (D&E) procedures, better known as “dismemberment” abortions because they entail literally ripping unborn babies apart in the womb, then removing them from the uterus limb by limb.

As expected, the bill failed to receive the 60 votes necessary to invoke cloture, as well as the simple majority that would have been necessary to pass the bill and send it to Biden’s desk.

While the vote was intended to mollify the abortion lobby, the latest version of the bill has caused consternation among abortion groups, HuffPost reported, because while its substance is exactly the same, it omits a preamble of legislative findings that “described in detail the history of abortion restrictions, the ways they’ve intersected with racism, classism and misogyny, and how bans like those now playing out at the state level disproportionately affect the most vulnerable.”

Schumer and other leading Democrats reportedly met with leaders of the disgruntled groups and explained that the language about unrelated “social justice” narratives could cost the votes of up to 10 Democrats. Chief WHPA sponsor, Democrat Sen. Richard Blumenthal of Connecticut, told HuffPost that they wanted “to attract the broadest possible support and to avoid any issues that are unnecessarily divisive.”

More than a dozen other states plus the District of Columbia have laws on the books legally protecting abortion, at least three of which explicitly codify the practice as a “right.” Abortion would remain legal in those jurisdictions, as well as the remaining states that have not spelled out abortion’s status one way or another, but without Roe state residents would have the power to vote on the issue for themselves, or lobby their elected representatives to change the law in either direction. Pro-lifers in Congress could pursue a nationwide abortion ban as well.