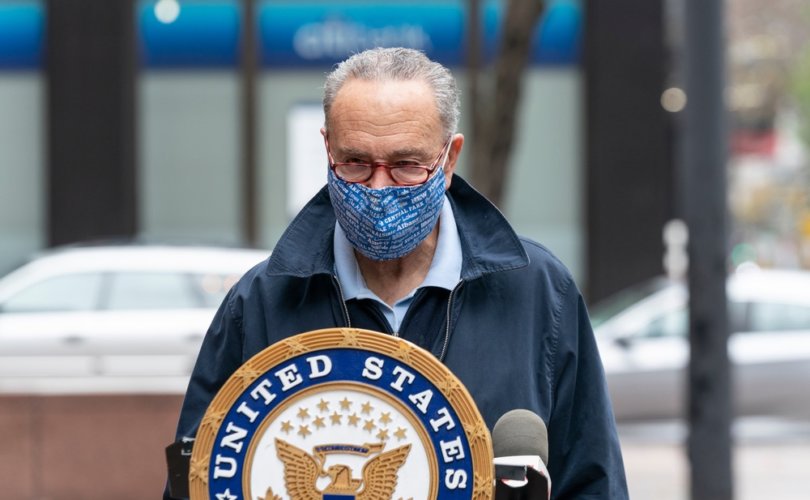 WASHINGTON, D.C. (LifeSiteNews) – The U.S. Senate is poised to vote next week on legislation that would enshrine abortion on demand in federal law, forcing states to allow the practice to go on virtually unregulated, in response to the leak of a draft opinion indicating the Supreme Court might finally be ready to reverse the notorious precedent.

Last December, the Court began consideration of Dobbs v. Jackson Women’s Health Organization, which concerned Mississippi’s HB 1510 law banning abortions from being committed past 15 weeks for any reason other than physical medical emergencies or severe fetal abnormalities. After its enactment in 2019, the Fifth Circuit Court of Appeals deemed it unconstitutional because of an “unbroken line dating to Roe,” the 1973 ruling which imposed on all 50 states a “right” to pre-viability abortion.

It remains unclear whether the draft represents a final decision to overturn Roe, a tentative decision subject to change, was prepared in anticipation of a majority to overturn, or was written in hopes of persuading Alito’s colleagues to sign on. Regardless, the leak has sent shock waves across the political spectrum, with pro-lifers tentatively rejoicing, pro-abortion politicians and activists lashing out in anger, and many speculating that the leak may have been intended to pressure judges to flip their votes, or to incite hatred and threats against them.

USA Today reported that Democrat Senate Majority Leader Chuck Schumer of New York announced Thursday that he will file cloture next Monday on the so-called Women’s Health Protection Act (WHPA) for a vote to take place next Wednesday.

The bill, which has been repeatedly introduced over the years without success, establishes a federal statutory right to perform and obtain abortions, including after fetal viability (under the broad cover of “health”), and specifically forbids states from subjecting abortion to ultrasound requirements (even though these are standard to discern fetal age), mandatory waiting periods, informed-consent requirements, and other health and safety regulations, such as admitting privileges.

The WHPA also protects so-called “webcam” abortions (i.e., dispensing abortion pills without an in-person doctor’s visit), forbids banning abortions on the basis of a baby’s race, sex, or disability, and forbids banning particular techniques such as dilation and evacuation (D&E) procedures, better known as “dismemberment” abortions because they entail literally ripping unborn babies apart in the womb, then removing them from the uterus limb by limb.

“Republicans will not be able to hide from the American people, and cannot hide from their role in bringing Roe to an end,” Schumer claimed, though Republicans may welcome such an opportunity to put each senator on the record.

The House voted 218-211 in September to pass the WHPA, which has the support of President Joe Biden. However, the vote is likely to be little more than a symbolic gesture for the Democrats’ left-wing base, since the Senate is evenly divided between Republicans and Democrats, and therefore would need at least 10 Republicans to join every Democrat for it to pass under current filibuster rules.

Abolishing the legislative filibuster would enable the bill to pass with a simple majority, but Democrat Sens. Kyrsten Sinema and Mark Kelly of Arizona, and Joe Manchin of West Virginia are not in favor of going that far, to the frustration of left-wing activists. A Senate vote on the WHPA failed in March.

Pro-lifers in Congress could pursue a nationwide abortion ban as well, though as the WHPA demonstrates, abortion allies would be equally free to pursue the opposite, meaning that even after Roe’s fall the abortion debate would be far from over.