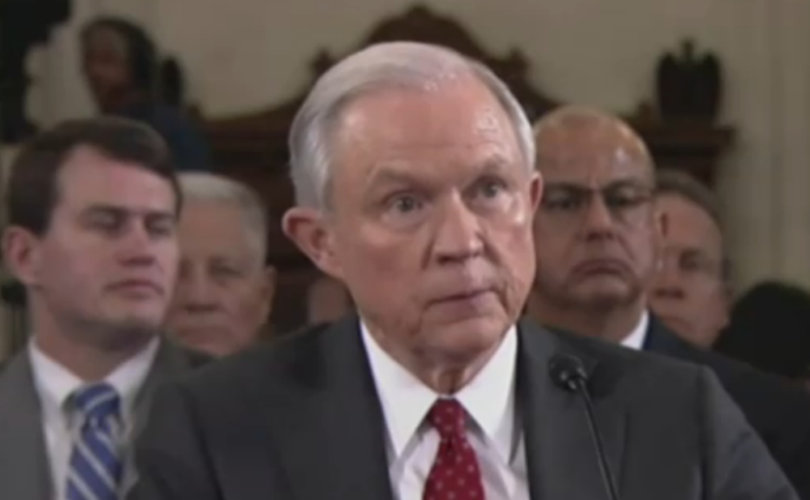 WASHINGTON, D.C., November 15, 2017 (Operation Rescue) – Attorney General Jeff Sessions testified before the House Judiciary Committee on Tuesday and acknowledged that Planned Parenthood and others who may have participated in the illegal sale of aborted baby organs and tissue could be criminally charged once the FBI completes its investigation.

Rep. Trent Franks referenced a report published Monday by The Hill that the FBI had asked to view unredacted documents obtained by the Senate Judiciary Committee’s yearlong investigation into allegations that Planned Parenthood and others engaged in the illegal sale of aborted baby body parts. That investigation was initiated by undercover videos released in 2015 by the Center for Medical Progress that clearly show Planned Parenthood executives haggling to get top dollar for aborted baby parts.

The Senate Judiciary Committee and the House Select Investigative Panel on Infant Lives, which conducted a similar investigation, both referred Planned Parenthood organizations and several middle-man organ procurement companies to the Department of Justice for criminal investigation and prosecution.

Franks asked Sessions if any Senate investigation and subsequent referrals provided a sufficient basis to bring criminal charges on any “guilty party.”

Operation Rescue president Troy Newman, who is a founding board member of the Center for Medical Progress and served while the undercover videos were being filed and produced, welcomed the news.

“When Attorney General Sessions was confirmed, I pledged to stand ready to assist him with access to our research and documentation in prosecuting abortion abusers including Planned Parenthood. That offer still stands,” he said.

“After listening for two years to Planned Parenthood lie about their involvement and stonewall two Congressional investigations, I am now hopeful that an FBI investigation will result in charges against Planned Parenthood criminals and their accomplices who broke the law,” Newman continued. “Planned Parenthood tried to smear the video evidence as faked with a so-called forensic report that has been proven as phony as a three-dollar bill. Now we know the only thing that is fake is Planned Parenthood’s denials of wrongdoing.”

In June 2017, Newman wrote a letter to Attorney General Sessions asking for speedy action on the Congressional referrals.

“Needless to say, these allegations are very serious, and if true, are literally putting innocent lives in grave danger,” wrote Newman. “Because of that, I encourage you to pursue criminal investigations and prosecutions, if warranted, against the Planned Parenthood organizations, the organ procurement companies … with all urgency in order to protect women and their babies from harm, and in the interest of justice.”

Planned Parenthood and the National Abortion Federation sued Newman and other CMP officials in 2015 to block the release of further videos. They successfully obtained a gag order that was upheld by the Ninth Circuit Court of Appeals, which prevented Newman and others from releasing any of the forbidden videos to law enforcement even if they obtained evidence of crimes.

Newman and his attorneys with the American Center for Law and Justice filed a petition with the Supreme Court challenging the gag order – a challenge that now takes on new urgency in light of the apparent ongoing FBI investigation.

A decision on whether the Supreme Court will hear Newman’s petition is expected before the end of the year.