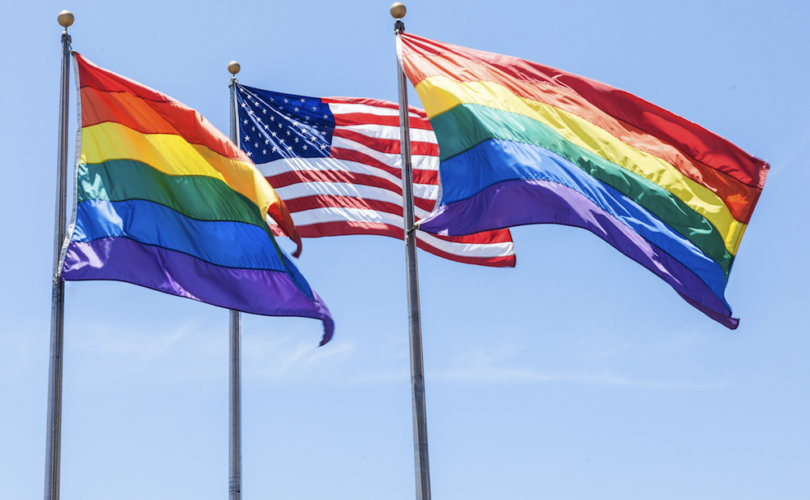 Labeled a “top priority” by the Biden administration, the proposed legislation would amend the 1964 Civil Rights Act to include “sex,” “sexual orientation,” and “gender identity” among expressly recognized “non-discrimination” categories in “public accommodations” (the definition of which would be dramatically expanded); and force employers of 15 or more people to recognize their claimed “gender identity,” forbid them from “discriminating” based on “sexual orientation” or “gender identity,” and mandate transgender “access” to sex-specific facilities.

Conservatives argue the bill’s true purpose is not to protect homosexual or gender-confused Americans from actual harm, but to force religious adoption agencies to place children in same-sex homes; force other Americans such as photographers, florists, and bakers to participate in same-sex “weddings”; force employers and businesses to accommodate cross-dressing and sex-change treatments regardless of their own values or policies; and to force women and girls to share sleeping quarters, showers, changing areas, and bathrooms with gender-confused males.

Keating’s remarks consisted largely of emotional appeals and personal experience, and in fact demurred two questions for lack of expertise. David was the most active representative for the pro-Equality Act side of the proceedings, claiming that “black trans women are faced daily with threats of violence,” and that “last year alone, we had more than 44 transgender women who were murdered in this country.”

HRC’s own material supporting that statistic neglects to mention whether gender was a motivating factor in most of the examples it cites; in the past, pro-LGBT media has been caught misrepresenting as hate crimes instances of gender-confused Americans murdered for unrelated reasons. Federal crime statistics indicate that gender-confused Americans are murdered at a lower rate than the overall murder rate.

In response to questioning by Chairman Dick Durbin (D-IL), David insisted that the Equality Act would not force religious institutions to alter whatever pronouncements they made about their beliefs (something not alleged by most of the bill’s critics), though he did go on to tactitly admit to Sen. Lindsey Graham (R-SC) that the bill’s impact would be far-reaching by arguing that “public accommodation” simply means any private entity that opens its doors to the public – i.e., Christian charities that serve anyone in need, not just Christians.

On the other side, Hasson argued that the Equality Act “cements into law an ideological belief that identity is self-defined.” Despite the gender-fluid ideology animating the bill, she said, “sex does matter. Only females experience female puberty, birth, and menopause…biology also makes females uniquely vulnerable when privacy is compromised. Nine out of ten rape victims are female, after all.”

To the public accommodations point, Hasson cited Supreme Court Justice Clarence Thomas’s reminder that religious faith is about action, not just belief. “Religious contributions to the economy amount to about $1.2 trillion,” she said, adding that religious charitable activity saves an estimated 20,000 lives and billions of dollars every year. “But the Equality Act slams the door in [religious Americans’] face and says ‘get back inside.”

Shrier argued that, contrary to the picture painted by LGBT activists to justify the Equality Act, “gay and transgender Americans are living today with less fear and stigma than at any point in history,” and rather than addressing a real problem, the bill would create a host of new ones, from young women being deprived the opportunities that come with athletic achievement, to women being placed in male prisons, to male teachers being allowed to accompany little girls to restrooms.

“For some girls, athletics is the only chance they’ll have to shine for the entire course of their lives,” she said. “But supporters of this bill don’t appear concerned about them. They’re concerned about the progressive groups that will call you a ‘transphobe’ or a ‘homophobe’ if you don’t do exactly as they say and abandon women and girls.”

“Being a woman is a lifetime commitment,” Shrier argued. “It entails profound blessings but also physical vulnerabilities. For generations, women like the late Justice Ruth Bader Ginsberg fought to create sex-based protections to make life safe and fair for women. If you vote to take away those rights, don’t pretend you’ve achieved a civil rights victory. In the name of inclusivity, you’ll have made life far less safe, far less fair, and far less inclusive for America’s women and girls.”

During cross-examination, Sen. Tom Cotton (R-AR) laid out several examples of the Equality Act’s potential ramifications, and addressed the topic of “transgender” athletes by comparing the speed of world record-holding runner Florence Griffith Joyner to the speeds of recent male high-school runners:

Under the Democrats' “Equality” Act, battered women's shelters could be sued for refusing to admit men. Religious schools could be cut off from federal funding. Millions of Americans could be threatened by lawsuits.

All for believing that men are men, and women are women. pic.twitter.com/uV46KCdP85

There's nothing fair about letting men compete against women in sports, and there's nothing equal about the “Equality” Act. pic.twitter.com/AsQgrU0Hur

Finally, Sen. Ted Cruz (R-TX) noted that the Judiciary Committee’s Democrat leadership refused to hear testimony from a witness whose family has been directly harmed by the policies Democrats want to impose nationwide: Christina (Cathy) Mitchell, the mother of one of the Connecticut track runners who have challenged the Connecticut Interscholastic Athletic Conference (CIAC) over its decision to force them to compete against biological males.

The Daily Caller reports that Mitchell, her daughter Chelsea, Selina Soule, and Alanna Smith had all submitted written testimony for the hearing. “When the majority reviewed the list of three witnesses proposed by the Republican side, the Democrats decided the committee could only hear from two of them,” a Republican committee aide told the Caller. “That meant one person’s testimony would be left out: the mother of a female athlete.”

A Democrat committee aide disputed the claim, claiming that “Republicans were able to call two minority witnesses of their choosing” and they were the ones who decided that Mitchell didn’t make the cut. But Cruz maintained that Democrats didn’t want Mitchell undermining their narrative.

“They didn’t want the American people to hear from Cathy Mitchell,” the senator said during the hearing. “To hear about the unfairness to little girls having girls sports destroyed because of the radical policies of today’s Democrats.”