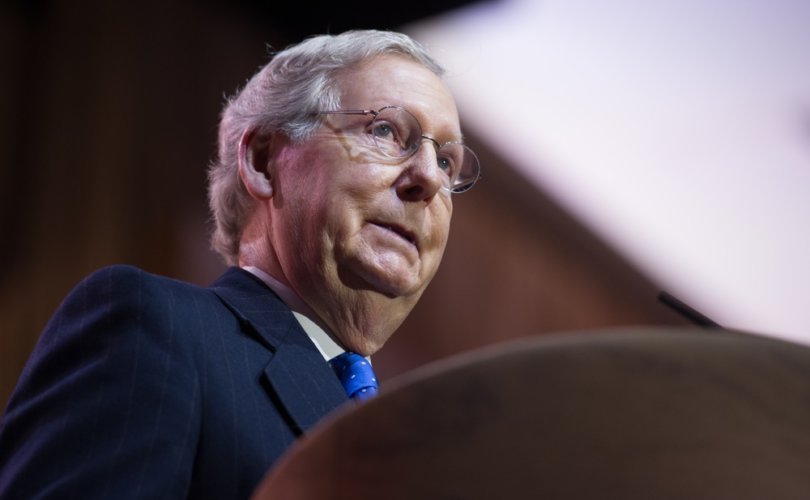 Senator Jeanne Shaheen (D-NH) had made a last-minute amendment to the State and Foreign Operations (SFOPs) bill in the appropriations subcommittee last month increasing funding to groups that promote abortions overseas. Her amendment also directed funding to the pro-abortion UN population agency.

Pro-life leaders saw the amendment as an attempt to undermine and evade the administration's signature international pro-life policy, Protecting Life in Global Health Assistance (colloquially known as Mexico City Policy). They charge the amendment also violated a budget deal reached in August. Republicans and the White House had agreed to raise the debt ceiling provided the Democrats refrained from adding “poison pill” amendments during the appropriation process.

Though not specific to abortion the agreement stated, “There will be no poison pills, additional new riders … that allow for higher spending levels, or any non-appropriations measures unless agreed to on a bipartisan basis by the four leaders with the approval of the President.”

“It's our duty to protect the most vulnerable in our society,” Daines said. “I am deeply concerned about how this amendment undermines pro-life policies abroad and I will continue to work to defeat it.”

Shaheen, a longtime member of the subcommittee tasked with funding overseas diplomacy, development and humanitarian assistance, annually proposes an amendment that undermines U.S. funding restrictions on abortion and abortion-related activities and increases funding to family planning groups abroad that are known to promote abortion.

This year, due to the budget agreement, the Shaheen amendment did not directly attack the administration's Mexico City Policy, but the amendment still increased bilateral family planning funds from $575M to $632M and appropriated $32.5M to the UN Population Fund. The funds would likely be diverted to domestic organizations that already receive $74.6M in international family planning funding, and that are not affected by the President's international pro-life policy.

More concerning to pro-life leaders, and new this year, Shaheen's amendment incorporated a non-discrimination policy established during the twilight hours of the Obama administration that prohibits discrimination on the basis of pregnancy, sexual orientation and gender identity.

The non-discrimination regulation prohibits U.S. Agency for International Development (USAID) “contractors from discriminating on the basis of, inter alia, “age” or “sex (including gender identity, sexual orientation, and pregnancy)” such as “by withholding, adversely impacting, or denying equitable access to” USAID-funded supplies and services.”

The non-discrimination clause would create a chilling effect for USAID to partner with pro-life, pro-family, or faith-based contractors. It will directly undermine USAID's New Partnerships Initiative (NPI), that helps in-country community and faith-based organizations to partner with USAID. Pro-life organizations could be found in violation of discrimination on the basis of “pregnancy” for not providing abortion.

Also problematic in the foreign operations bill was a scheme to funnel funding to abortion groups by integrating health into women economic empowerment programs despite it being outside what a new women's economic empowerment law requires. The proposed pilot program circumventing legislative approval made its way into the report language through Sen. Lindsey Graham's office.