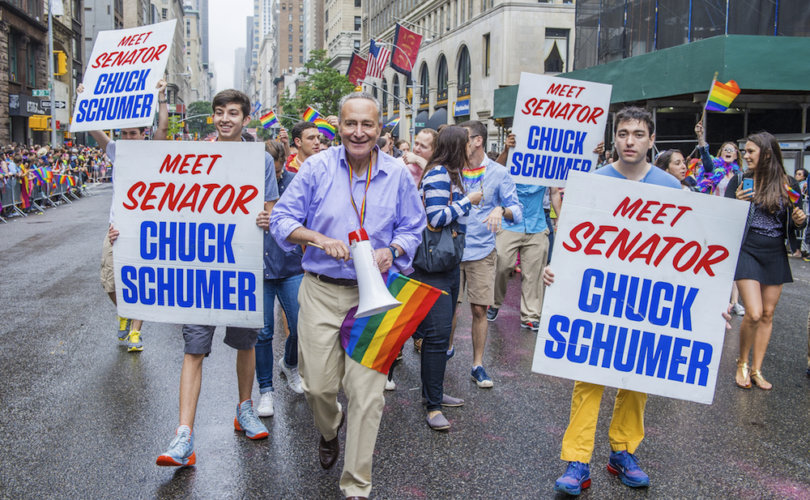 “They have to follow the law,” Schumer told the Huffington Post Thursday. “For instance, Roe v. Wade has been the law for a long time.”

After pushing Democrats in 2007 to oppose George W. Bush nominees in the final year of his presidency and then criticizing Republicans last year who opposed Barack Obama’s nominee, Schumer is now threatening to block nominees by Trump.

While the New York Democrat said he would not impose a litmus test for a Trump nominee, he still held Roe as the standard.

“If these people want to just repeal and rip out Roe v. Wade, you have to look at the whole picture,” Schumer said. “I’m not going to have a litmus test. But that would be an indication.”

Schumer went on to say there are lots of different criteria for what would qualify as “out of the mainstream,” “but you know it when you see it.”

Schumer did not say outright whether he is prepared to leave a vacancy on the Supreme Court for four years, but he did promise that Democrats were ready for a lengthy battle.

“If he puts one up out of the mainstream and gets voted down, and he puts another one up, we’ll still oppose that one,” he said.

The day before, Schumer said on MSNBC that Democrats would fight a Trump Supreme Court nominee “tooth and nail” if Trump names an “out-of-the-mainstream nominee.”

Schumer has advocated for a leftist bent on the High Court since at least the George W. Bush Administration, when as Senate Judiciary Chairman he said in 2007 that he regretted the confirmation of Justice Samuel Alito the year before and that it was one of the “greatest failings” of his career as a senator.

“The Supreme Court is dangerously out of balance,” Schumer stated as his rationale for why Bush shouldn’t expect to make any further Supreme Court nominations in the final months of his presidency. “We should reverse the presumption of confirmation.”

After saying in 2007 that his party should block Bush nominees because of that balance, Schumer then flipped his stance last year after the February death of Justice Antonin Scalia and criticized Republicans who opposed late-term Barack Obama nominee Merrick Garland.

“The consequences are going to be down the road,” Schumer said last Tuesday. “If they don't appoint somebody good, we're going to oppose them tooth and nail.”

“It's hard for me to imagine a nominee that Donald Trump would choose that would get Republican support that we could support,” he continued. “We are not going to make it easy for them to pick a Supreme Court justice.”

Trump had pledged repeatedly during his campaign to appoint pro-life judges who were Constitutionalists, releasing two lists of possible nominees that were praised by pro-life leaders.