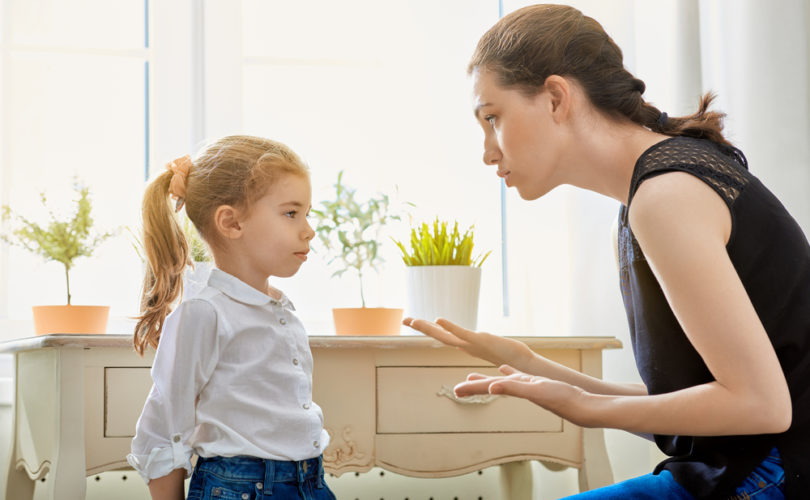 OTTAWA, Ontario, February 7, 2017 (LifeSiteNews) – A bill to criminalize spanking will return to the floor of the Canadian Senate in late February.

If S-206 passes, it will go to the House of Commons, where the Liberal majority has pledged its support.

But those who believe disciplining children with spanking should be an option for parents are worried that their actions could lead to criminal charges against parents and child seizures by the government.

“There is legitimate concern that the separation of good parents from their children could be one outcome of repealing Section 43,” wrote Andrea Mrozek, director of Cardus Family, part of the social-conservative think tank, in an essay this week in the National Post.

Section 43 of the Criminal Code reads, “Every schoolteacher, parent or person standing in the place of a parent is justified in using force by way of correction toward a pupil or child, as the case may be, who is under his care, if the force does not exceed what is reasonable under the circumstances.”

Hervieux-Payette offered arguments against spanking when she introduced Bill S-206 shortly before her retirement last year. He remarks included an attack on the Catholic Church and St. Augustine of Hippo, whom she blamed for leading Western civilization astray from the non-violent teachings of Jesus Christ.

St. Augustine, she claimed, believed that children were inherently sinful and selfish and therefore needed physical correction. He was “a fifth century man” with fifth century ideas, “which would lead to millions of victims through the centuries.”

She also argued that Canada needed to follow the lead of nations in other parts of the world.

“Since 1979, 48 countries have abolished all forms of child-rearing violence against children,” she said, “31 of them during the time that Stephen Harper was Canada's Prime Minister and one since Justin Trudeau's rise to power.”

She said Canada had a chance to become “the first country in North America to prohibit child-rearing violence.”

The Canadian Medical Association and more than 500 organizations and individuals such as former NDP premier of Saskatchewan Stephen Lewis support criminalization of spanking.

Hervieux-Payette also mentioned scientific claims that “pediatricians, doctors and psychologists believe that this type of behavior sends a bad signal to the child, who, potentially, will suffer psychological consequences” and does not work at correcting behavior.

She cited studies that show child become more violent when corporal punishment is routinely used by parents. She presented a Statistics Canada study of more than 1,900 children that indicated “parents with higher punitive parenting practices scores rated their children higher in aggressive behavior than other parents.”

But Conservative Senator Donald Neil Plett countered much of her argument.

“The honorable senator has unfortunately lumped child discipline and child abuse into the same category,” he said. “Many of the studies cited by the senator also lump spanking or minor corrective physical discipline with child abuse, and confuse correlation and causation, skewing any conclusions.”

In other words, were the children of spanking parents in the Statistics Canada study more violent because of spanking, or did their parents spank more than others because their children were more violent?

Moreover, Plett said, because of a Supreme Court ruling in 2004, Section 43 did not prevent parents from being charged with assault whenever “there are any marks on the child, where an object has been used, where force is used on the child's head or where the child is incapable of learning from the correction.”

Therefore, Section 43 did not need to be repealed, Plett reasoned.

The senator used the research of parenting expert Dr. Robert Larzelere, which showed that Sweden’s 1979 spanking ban increased abuse of children under age 7 by 489 percent between 1981 and 1984.

Mrozek also relies on Dr. Larzelere’s work to defend corporal punishment. She cites his report for the American College of Pediatricians, a socially-conservative advocacy group, in which he critiqued an anti-spanking meta-analysis of 75 original studies produced last year by researchers at the University of Texas. While 71 of 75 of the original studies made no distinction between spanking and hitting and found spanking did not improve behavior, Larzerlere notes that the four studies that zeroed in on spanking found it the most effective way of correcting behavior.

Larzelere told LifeSiteNews that some children are inherently “oppositional,” and experiments with alternative methods have shown corporal punishment to be the most effective way to improve their behavior.

“If you don’t, some boys will learn that they are more powerful than their mother and that they don’t have to take no for an answer from anyone who is weaker than they are,” he said.

Bill S-206’s new sponsor, Murray Sinclair, was the chairman of the Residential Schools Truth and Reconciliation Commission that made 94 recommendations, among them the repeal of Section 43 of the Criminal Code.

Mrozek considers the recommendation a non-sequitur.

“The starting point for the physical , emotional and sexual abuse in residential schools was children’s removal from the parental home,” Mrozek said.