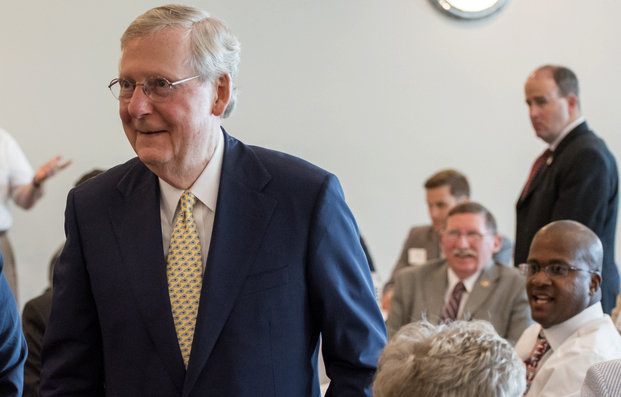 There are only 7 countries left that still permit elective abortion after 20 weeks—including the US, China, and North Korea. That’s why the #Senate will soon vote to take up commonsense legislation to protect unborn children who can feel pain.

“At five-month gestational age, babies have 10 fingers and 10 toes, they can yawn, stretch, make faces – and they can feel pain,” Sen. Joni Ernst, R-Iowa, said. “I’m fighting for this legislation in honor of my friend and fellow Iowan, Micah Pickering, an incredible 5 year old who was born prematurely, at five months’ gestation. This legislation could protect up to 10,000 lives like Micah’s every year.”

“I don’t believe abortion, five months into pregnancy, makes us a better nation,” Sen. Lindsey Graham, R-SC, wrote on his website. “America is at her best when she’s standing up for the least among us and the sooner we pass this legislation into law the better. We are on the right side of history.”

“Now Congress has an opportunity to take a step forward,” McConnell said Thursday. “I'm pleased to have filed cloture on this bill to protect unborn children who are capable of feeling pain … and I look forward to voting for it early next week.”

“Cloture” simply means debate will be ended so as to vote on the bill. That requires a procedural vote with at least 60 “yes” votes to overcome a certain Democratic filibuster.

“The Pain-Capable Unborn Child Protection Act is based in science,” Sen. Graham's website stated. “Anesthesia is administered directly to the unborn child in second-trimester fetal surgery. The unborn child shows physical, chemical, brain and stress responses demonstrating pain at this stage of development.”

The proposed law carries penalties for abortionists who violate the ban of fines or imprisonment. There are no proposed penalties for the woman involved.

In a call to reporters, Graham said he hopes to convince more Democrats than the last time it was voted on in the Senate, when in 2015 it was defeated 54-42. He said he has greater leverage since several states have voted on the ban.

“Majorities matter,” Graham said. “We’re going to get some Democratic support for this bill and I appreciate it very much.”

In that 2015 vote, three Republicans came under pro-life criticism for “selling out.” Sens. Susan Collins of Maine and Mark Kirk of Illinois voted against it, and Sen. Lisa Murkowski of Alaska skipped the vote.

Democrats Bob Casey of Pennsylvania, Joe Donnelly of Indiana and Joe Manchin of West Virginia voted “yes” in 2015, and have said they will do so again next week.

The Susan B. Anthony List has vowed to take its fight for the ban to senators. “We promise that in several of these states where it will have the highest impact we will take our troops door to door,” President Marjorie Dannenfelser said.

The bill includes the universally-understood exception for “life” of the mother, but not for the “health” of the mother. This distinction is important, because with the Supreme Court's Doe v Bolton decision that accompanied Roe, “health” was so broadly defined that women may cite literally any reason for aborting.

Critics say the proposed ban will not stand up to court challenge, but legal experts say it is “grounded in Supreme Court precedent” because the nation's highest court has repeatedly ruled that as pregnancy progresses, governments have a compelling interest in protecting the preborn child.

The legislation is controversial even among pro-lifers because it allows pain-capable abortions in cases of conception by rape or incest, provided the mother is counseled or treated two days before aborting.

Rebecca Kiessling pointedly asked, “Are babies conceived in rape somehow incapable of feeling pain?” Pro-life activist Monica Kelsey, who was conceived in rape, agreed with Kiessling, criticizing the National Right to Life Committee's endorsement of the ban, which charged legislators who vote against it with “allow(ing) unlimited abortion in the sixth month or later.”

Some pro-lifers oppose the bill on additional grounds. They say the bill implicitly sanctions abortions before 20 weeks and cite language in the bill listing “requirements for abortion.” They point out that the principle on which abortion should be outlawed is because it kills an innocent human being, whether a preborn feels pain or not. And they say the “life of the mother” exception implies the false idea that abortion can be a necessary medical treatment.

The National Right to Life Committee, the Susan B. Anthony List, the Family Research Council, Americans United for Life and Concerned Women for America all strongly support the bill.

President Donald Trump vowed throughout his campaign to sign the bill. “I call upon the Senate to pass this important law and send it to my desk for signing,” he said.