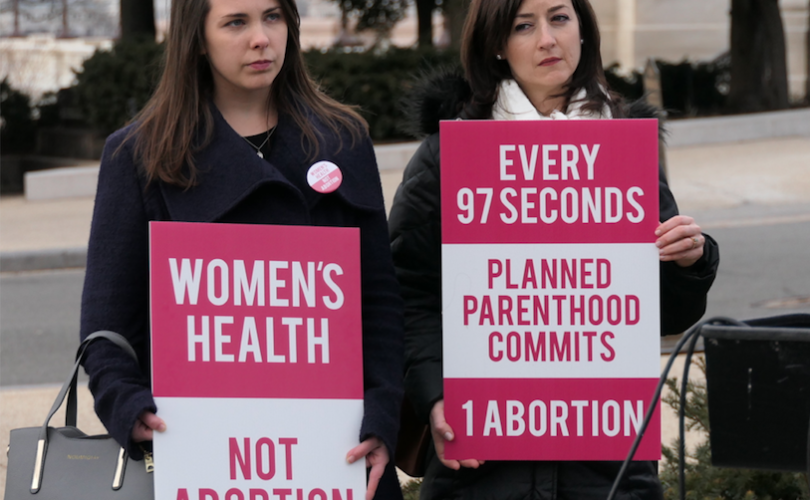 WASHINGTON, D.C., July 18, 2017 (LifeSiteNews) – Republican efforts in the U.S. Senate to repeal and replace Obamacare tanked last night as two GOP Senators came out against the bill, and Majority Leader Sen. Mitch McConnell, R-KY, admitted that “regretfully,” the bill “will not be successful.”

The Better Care Reconciliation Act was the Senate version of the American Healthcare Act, which the U.S. House passed 217 to 213 in May.

Sen. Jerry Moran, R-KS, and Sen. Mike Lee, R-UT, both said on Monday night that they'd vote against a motion to begin debate on the bill. McConnell then admitted that this rendered the bill dead, as it also faced opposition from Sen. Rand Paul, R-KY, and Sen. Susan Collins, R-ME.

The Better Care Reconciliation Act “contains strong pro-life protections,” the pro-life Susan B. Anthony List said in its endorsement of the bill.

“The legislation would severely cripple the abortion industry’s ability to end the lives of unborn children and deceive women and girls,” said Marjorie Dannenfelser, President of SBA List.

The bill would have stripped Planned Parenthood of most of its federal funding, redirecting it to community health centers that don't commit abortions.

On July 13, the Family Research Council (FRC) said it supported the Better Care Reconciliation Act in its current form because it would prevent subsidies for insurance plans with elective abortion and defund Planned Parenthood.

Moran esentially opposed the bill because he thought it was too conservative in its reforms. Lee thought it wasn't conservative enough. Lee said it didn't “create enough free space from the most costly Obamacare regulations” or lower healthcare premiums enough.

“Regretfully, it is now apparent that the effort to repeal and immediately replace the failure of Obamacare will not be successful,” McConnell said in a statement. “So, in the coming days, the Senate will vote to take up the House bill with the first amendment in order being what a majority of the Senate has already supported in 2015 and that was vetoed by then-President Obama: a repeal of Obamacare with a two-year delay to provide for a stable transition period to a patient-centered healthcare system that gives Americans access to quality, affordable care.”

The 2015 bill that Republicans will now attempt to pass repeals but doesn't replace Obamacare. It would defund Planned Parenthood for one year. Obamacare would end in 2020, giving Congress some time to hopefully agree on an alternative.

President Trump indicated that he thinks Republicans should repeal Obamacare and then “start from a clean slate” on its replacement.

“This is something that has to be done,” Sen. James Lankford, R-OK, said of repealing Obamacare on FOX & Friends this morning. He said he's “still optimistic” that Republican senators will be able to consolidate around one idea “because we must.”

Republicans should just REPEAL failing ObamaCare now & work on a new Healthcare Plan that will start from a clean slate. Dems will join in!

Conservative activist Phil Kerpen expressed his displeasure with this Republican failure in a snarky tweet:

Vote GOP, the party that will repeal Obamacare as long as Obama is there to veto.