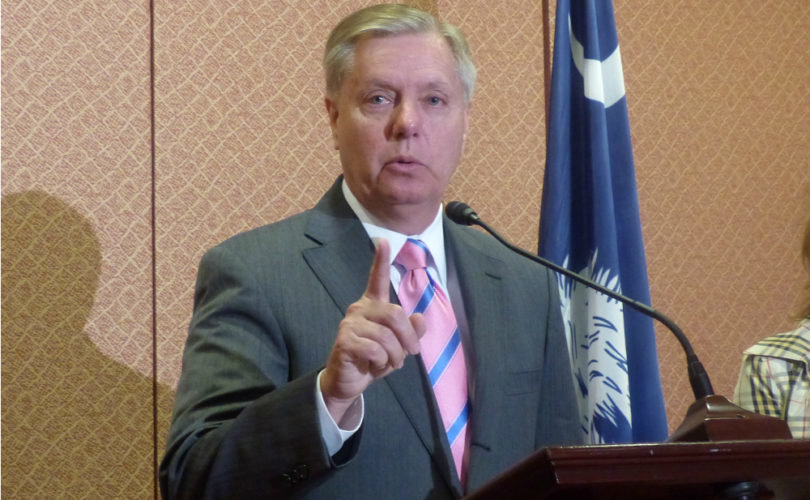 Senate rules give them just over two weeks to pass it with a simple majority.

Pro-life former Sen. Rick Santorum accompanied the senators as they announced the bill.

In April 2017, Heller told constituents he’d “protect Planned Parenthood” but then backtracked from those comments.

Heller was one of seven Republicans who voted “no” on a straight repeal of Obamacare that would have defunded Planned Parenthood as well.

In the early morning hours of July 28, Sen. John McCain, R-Arizona, cast the deciding “no” vote on a “skinny repeal” of Obamacare that also defunded Planned Parenthood, which commits more than 300,000 abortions annually.

McCain’s move, which Democrats celebrated, was surprising especially because the senator, who has cancer, flew back to Washington to cast a “yes” vote to allow debate and voting to proceed on the “skinny repeal” bill.

The new “Cassidy-Graham bill” creates block grants for states to establish their own healthcare systems.

“Four states get 37 percent of Obamacare dollars,” Cassidy’s FAQ about the bill says. “Support should be equal across the nation.”

It allows states to obtain waivers of “any provision that requires a health insurance issuer offering a coverage plan in the individual or small group market to ensure that certain benefits are included in such coverage.”

If Health and Human Services Secretary Tom Price interprets the Obama administration’s coercive contraceptive mandate as a “benefit mandate,” then it’s possible this bill could allow states to opt out of it.

“I commend Senators Graham and Cassidy on introducing a pro-life bill to replace the disaster that is Obamacare,” said Kristan Hawkins, president of Students for Life of America. “This bill does the right thing by defunding Planned Parenthood and directing funding towards Federally Qualified Health Centers.”

“Planned Parenthood has lied to the American public, committed fraud with taxpayer dollars, and has been proven to sell the body parts of babies they abort for profit,” Hawkins continued. “Yet Congress has continually failed to defund Planned Parenthood, despite having a pro-life Congress and President.”

Because of existing pro-life law, the state grants wouldn’t allow funding for abortions except in case of rape, incest, and threats to the life of the mother.

“It is extremely encouraging to see pro-life senators led by Lindsey Graham and Bill Cassidy offering new ideas and solutions to enact a healthcare reform reconciliation bill for FY17,” said SBA List President Marjorie Dannenfelser. “SBA List will need time to review the language carefully to ensure that it will roll back taxpayer funding of abortion under Obamacare and redirect abortion giant Planned Parenthood’s tax funding to community health centers.”

The same day Cassidy and Graham introduced their bill, Sen. Bernie Sanders, I-Vermont, introduced a single-payer healthcare bill. At least five Democrats are co-sponsoring it with him.