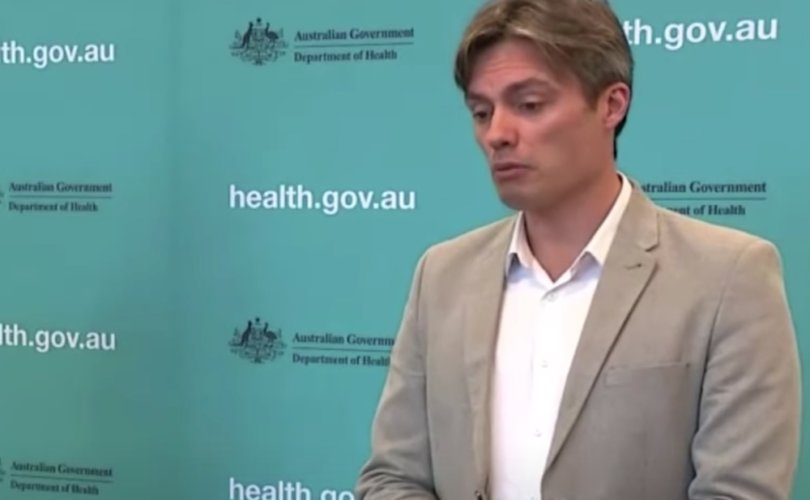 AUSTRALIA, August 25, 2020 (LifeSiteNews) – Australia’s second-most senior medical officer has described cell lines which come from a healthy baby girl aborted in 1972 and are now being used in the development of a coronavirus vaccine as coming from an “ethically aborted human fetus.”

Speaking at a government press conference, Deputy Chief Medical Officer Dr. Nick Coatsworth was responding to recent comments made by Archbishop Anthony Fisher of Sydney, after the Australian government announced a plan to supply Australians with Astrazeneca’s coronavirus vaccine. Astrazeneca’s vaccine is being developed in collaboration with the University of Oxford and is using the HEK-293 cell line, which was originally derived from kidney tissue taken from a baby girl who was aborted in the Netherlands in 1972 and later developed into a cell line in a lab in 1973.

“I’m aware of those concerns being raised this morning that the particular cell line that was produced for the vaccine was from an ethically aborted human fetus. That is the concern that was raised by the archbishop,” Coatsworth said.

“This is a very professional, highly powered research unit at Oxford University, one of the world's leading universities. So I think we can have every faith that the way that they have manufactured the vaccine has been against the highest of ethical standards internationally,” Coatsworth added.

Following the announcement of the deal with Astrazeneca, Australian Prime Minister Scott Morrison said that a coronavirus vaccine will be made “as mandatory as you can possibly make it.” He then quickly walked back the comments somewhat, saying that the vaccine “is not going to be compulsory” and that “we can’t hold someone down and make them take it.”

Coatsworth subsequently said that denying those who refuse a coronavirus vaccine the ability to go into restaurants, travel internationally, and catch public transport will be discussed by the government.

Archbishop Fisher has since published a letter to Morrison, co-signed by the Anglican Archbishop of Sydney Dr. Glenn Davies and the Primate of the Greek Orthodox Archdiocese of Australia Archbishop Makarios. Fisher also published a separate article in The Catholic Weekly.

“Along with many Australians we are praying that a vaccine might be developed that will help bring an end to the pandemic. We were therefore disappointed to learn that of the 167 candidate vaccines for COVID-19 identified by the World Health Organisation, 29 of which are already in clinical evaluation, the Commonwealth has chosen to throw its lot in with one that makes use of a cell‐line (HEK293) cultured from an electively aborted human foetus,” the three clerics wrote.

“Some will have no ethical problem with using tissue from electively aborted foetuses for medical purposes. Others may regard the use of a cell-line derived from an abortion performed back in the 1970s as now sufficiently removed from the abortion itself to be excusable.”

They continued, “But others again will draw a straight line from the ending of a human life in abortion through the cultivation of the cell-line to the use for manufacturing this vaccine; even if the cells have been propagated for years in a laboratory far removed from the abortion, that line of connection remains. They will be concerned not to benefit in any way from the death of the little girl whose cells were taken and cultivated, nor to be trivialising that death, and not to be encouraging the foetal tissue industry.”

The clergymen say that they “accept that the proposed vaccine may be sufficiently remote from the abortion that occasioned the derivation of the cell-line,” but that they are alerting the government to the fact that “any COVID-19 vaccine cultured on a foetal cell-line will raise serious issues of conscience for a proportion of our population.”

“Those troubled by this may either acquiesce to the social and political pressure to use the vaccine, or conscientiously object to the use by themselves and their dependents; if the latter, they will suffer various disadvantages (e.g. denial of access to childcare, aged care or employment) and their abstention may undermine the goal of ‘herd immunity,’” the letter continues.

“Given that many other [vaccine] trials are being conducted that do not involve the use of morally compromised human cell lines, we write to seek your assurance: (1) that the use of the Astrazeneca/Oxford University COVID-19 vaccine will in no sense be mandatory; (2) that no-one will be pressured to prescribe, dispense or consent to the use upon themselves or their dependents of the vaccine against their conscientious religious or moral beliefs or disadvantaged for failing to do so; and (3) that the government will ensure that an ethically uncontroversial alternative vaccine be made available in Australia if it is achieved,” the letter continues.

The religious leaders also point out that “for some people the Rubella vaccine already presents such a moral dilemma.”

In his article in The Catholic Weekly Fisher says: “I, for one, don’t think it would be unethical to use this vaccine if there is no alternative available. To do so would not be to co-operate in any abortion occurring in the past or the future. But I am deeply troubled by it.”

In a subsequent post on Facebook, Fisher stated that he has not, nor will he “call for Catholics to boycott the vaccine if it became available.”

“What I did was join with other faith leaders to ask the Prime Minister to, in addition to the agreement made with AstraZeneca, pursue arrangements for other vaccines and not just limit themselves to one, which some in our community will find ethically concerning,” he wrote.

Australian Medical Association president: Even if trials of this vaccine go well, ‘it's still not absolutely proven that it is safe’

Meanwhile the president of Australian Medical Association, Dr. Omar Khorshid, has said that making vaccinations compulsory “sends the wrong message to the community.”

“We have to acknowledge it is a rushed approval process and even if the phase three trials on this Oxford vaccine go really well, it's still not absolutely proven that it is safe, not as proven as is normally the case,” Khorsid said.

“That does increase the risk that there might be rare side effects … that we just don't know about,” he added.

The Catholic Bishops’ Conference of England & Wales (CBCEW) has claimed that Catholics have a “prima facie duty to be vaccinated” and that “all clinically recommended vaccinations can be used with a clear conscience” even if they are made using cell lines from an aborted baby.

In an open letter published in May, Catholic clergy and laity led by former papal nuncio Archbishop Carlo Maria Viganò and Cardinals Gerhard Ludwig Mueller, Joseph Zen, and Janis Pujats said that “for Catholics it is morally unacceptable to develop or use vaccines derived from material from aborted fetuses.”

“I renew my call that we reject any vaccine that is developed using aborted children,” Strickland tweeted earlier this month.

I renew my call that we reject any vaccine that is developed using aborted children. Even if it originated decades ago it still means a child’s life was ended before it was born & then their body was used as spare parts. We will never end abortion if we do not END THIS EVIL!