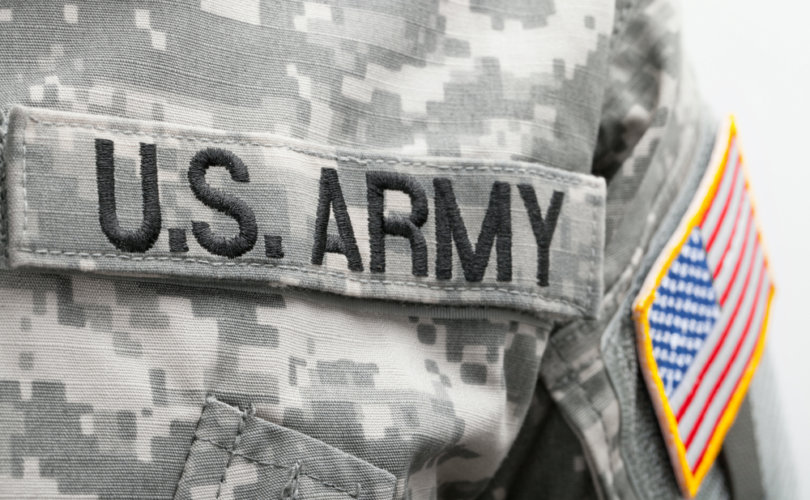 TUCSON, Arizona (LifeSiteNews) – A senior U.S. Army officer has blown the lid on tactics employed within the military to deny all legitimate COVID-19 shot exemption requests, accusing those in command of denying medical care to the un-jabbed and abusing positions of authority.

Speaking on condition of anonymity at the Truth for Health Foundation’s latest conference exposing COVID-related tyranny within the ranks of the military, the senior serviceman, a U.S. Army Chief Warrant Officer of 20 years, said that from the top down “service members from every branch have been coerced, bullied, and threatened” if they don’t take an abortion-tainted COVID jab.

The officer, who is still in active service, has spearheaded a social media outreach program “for military employees who have had injuries and abuses of their civil rights” for the past two years, working to expose “corrupt and unlawful conduct in the military.”

Although being witness to “plenty of wrongdoing” in the military throughout his two-decade spanning career in the army, the officer stressed that his prior belief in the ability of the internal disciplinary systems to uproot bad actors within the ranks has been “completely dispelled” over the last 18 months, specifically regarding the Army’s blanket denial of legitimate COVID shot exemption requests.

“Despite the many memos, regulations, and federal laws that exist, service members from every branch have been coerced, bullied, and threatened,” the officer explained, adding that “exemptions both religious and medical were denied, existing exemptions have been revoked.”

Continuing, the veteran said there exists “absolute solid proof that senior personnel departments are instructing their subordinates to not return [COVID shot] denial paperwork to the service member so they will be forced to submit a Freedom of Information Act [FOIA request] to get that paperwork.”

“By the time the whole FOIA is complete, the five-day window for an appeal is already lapsed; they know this,” he said.

In addition to being left in limbo regarding their exemption requests, the officer noted that soldiers who refuse to take the jab are being penalized in other serious ways. “Troops are being denied medical care” if they don’t take the jab, as well as being “threatened to not go to medical because a COVID-positive test will require them to quarantine for two weeks, and it’ll take them out of the ranks.”

“In 2020,” he continued, “commanders were taking soldiers to the field during the middle of summer and quarantining them in place with engineer tape [normally used for marking purposes]. They [commanders] threatened and mistreated the troops who denied taking the EUA [emergency use authorization] vaccine and offered incentives to those who did get it.”

The officer noted that the practice of coercion and blanket denial of exemption requests is “in direct violation of DoD [Department of Defense] policy at the time,” which specifically states that the Secretary of Defense’s August COVID shot mandate for active service members is “subject to exemptions as required by law.”

“But the DoD operates on two different levels,” the soldier stated, explaining that the department employs “a closed-door policy” that is unseen by the general public.

— Article continues below Petition —
PETITION: No to mandatory vaccination for the coronavirus
Show Petition Text
1081787 have signed the petition.
Let's get to 1100000!
Thank you for signing this petition!
Add your signature:
Show Petition Text

At the same time that the DoD issues public policy “which the American public consume,” the officer said they “heavy-handedly” enforce a private policy of “commander intent,” which he said essentially means senior personnel can order “anything they want.”

Although the DoD presents its policies as preventing exactly the kind of abuses described by the officer, such as misusing authority, “this is a lie,” he said. “The entire system operates under the premise of doing what you’re told no matter what, or you’ll be replaced with somebody who will.”

“America is often unaware of seeing how its sons and daughters are being treated by our military,” he lamented.

The officer stated that, within the last two years, he has received “thousands and thousands” of desperate letters from service members “not knowing where to turn to” after experiencing “egregious abuses,” including a lack of due process, illegal orders, among other dangerous situations.

Ultimately, “the issue is the legality of this order,” he explained. “Despite the many dangers of the vaccine which have clearly been shown at this point, the DoD lacks the authority to mandate this vaccine. There is no FDA [Food and Drug Administration] approved version of the vaccine in America or anywhere.”

Despite the COVID shot mandate, having been passed down by Secretary of Defense Lloyd Austin, the officer maintained that “he doesn’t have the authority to order a non-FDA approved vaccine, but he has convinced so many people that he has the FDA approved vaccine that he did this under this shell game that he has played with approvals and dates.”

“The only person who has the authority is the president,” the officer added, noting that even the president must couple the mandate with some kind of operation “where basically the risk of taking the vaccine is less than the risk of not taking it due to the operation in effect.” The importance of this point, the officer emphasized, is that conflicts with other nations could give rise to a presidential mandate to take the abortion-tainted shots.

If this were to happen, he said, “all the service members whose careers were buried and the irrevocable harm that has been done will cease to exist and it will never see the light of day again.”

“The unlawful conduct taking place within the DoD is a threat to our national security and the very Constitution we are sworn to protect. Congress is aware of what’s happening, but many of your representatives out there don’t want to touch the issue,” the officer said, adding that politicians are depending on the ignorance of the American public for the corruption “to just blow over.”

“The foundation of our nation is cracking right now and it’s not going to sustain the fallout if our citizens don’t realize what’s taking place and act on this immediately.”