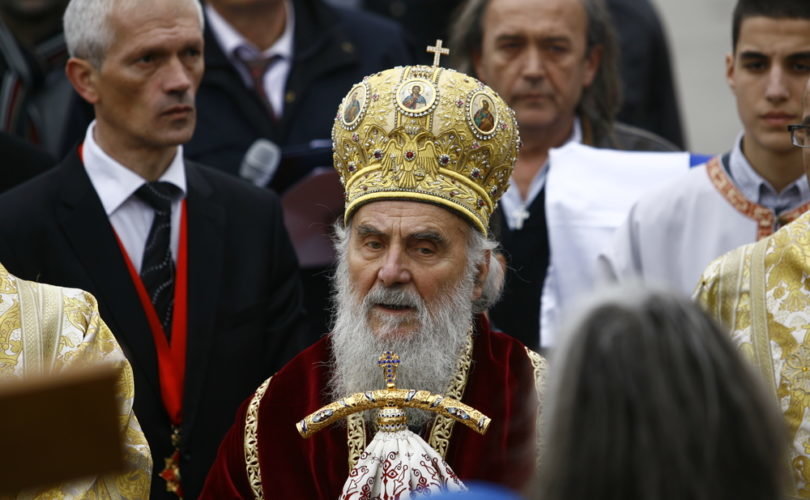 Activists working to bring the “Gay Pride” event to Serbia are causing “unrest and aggression, awakening destructive instincts ... among the young," said the statement signed by Patriarch Irinej.Shutterstock

The bishops of the Serbian Orthodox Church have denounced plans to stage a “Gay Pride” demonstration in the capital of Belgrade this weekend. The parade and the activists putting it are “shameless,” “selfish” and represent a form of western European moral corruption being imported into Serbia that will “cast a shadow” over the country, they said.

In a statement signed on Tuesday by Patriarch Irinej, the autocephalous Orthodox Serbian Church said that the “great majority” of the Serbian people are opposed to such demonstrations.

Activists working to bring the “Gay Pride” event to Serbia are causing “unrest and aggression, awakening destructive instincts … among the young,” the statement said.

“You have the right to stage a parade, but only at your own expense and at the expense of those who give you instructions, no matter how you call them… but not at the expense of Serbia – bombed, devastated, morally and economically ruined, impoverished, flooded, publicly shamed,” Church leaders said.

He asked whether a cash-strapped state still dealing with last May’s flooding should spend millions on a “fundamentally absurd parade.”

“Are you so blinded by lust and egotism that you do not mind the enormous and unfounded costs of staging the parade?”

“The organizers of such a display and their European mentors refuse to learn from the outcomes of the previous parades,” the statement added, in a reference to the 2010 attempt by homosexualist activists to stage a “Gay Pride” demonstration in Belgrade that deteriorated into violent clashes.

The bishops asked how the rights of homosexuals can be realized “by mocking and offending moral values of the vast majority of humankind.” Homosexuality violates “God’s moral structure built into the human nature,” they added.

“If gay sexual orientation is justified and should be promoted, then why wouldn’t the same apply to pedophilia, which is widespread in the western world, incest… Why are their rights inferior to your so-called right of sexual (dis)orientation?”

The bishops also denounced the activists for attempting to impose their lifestyle on others, “particularly on innocent children and inexperienced youths.”

The 2010 event went ahead following veiled threats against the reluctant Serbian authorities from the Council of Europe and the European Union. Serbia is still in the process of asking for European Union membership, and the EU routinely holds up the “gay rights” agenda as a litmus test, particularly for countries with strong Christian cultural roots.

The 2010 demonstration was allowed to go forward, but the resulting violent reaction from the public has prevented a repetition. This year, as of Tuesday, a decision from police about the event is still pending.

This year’s event is being billed as the culmination of an entire “Pride Week”. The organizers efforts are strongly backed by the European Union and EU-funded NGOs who have included Serbia, along with Kosovo, Nigeria and Uganda, in a list of nations condemned for refusing to implement the “gay rights” agenda in law and civil policy.

The latest available statistics say that 84.6 percent of Serbia’s population of 7.2 million people adhere to the Serbian Orthodox Church, and support for the homosexualist movement is low. While homosexual activity is not criminalized, Article 62 of the 2006 Serbian constitution defines marriage as being between one man and one woman. Same-sex civil unions have no existence in Serbian law, although there is no constitutional provision against their eventual establishment.

This does not mean, however, that the homosexualist activists have not made gains. As part of their stated goal of supporting the movement’s goals under the rubric of “equality,” the British Government succeeded in pressuring the Serbian government into allowing “same-sex marriage” ceremonies inside the British embassy grounds.

A note from the British Foreign Office says that British foreign missions provide “a same sex marriage service in countries where it is not possible for British nationals to have such a marriage under local law and where the local authorities have given permission for the missions to conduct consular marriages of same sex couples.”

Activists have found much success by having homosexuals from countries that do not recognize their union to obtain civil “marriage” ceremonies in countries where it is legal, then return home to try to force recognition through the courts.