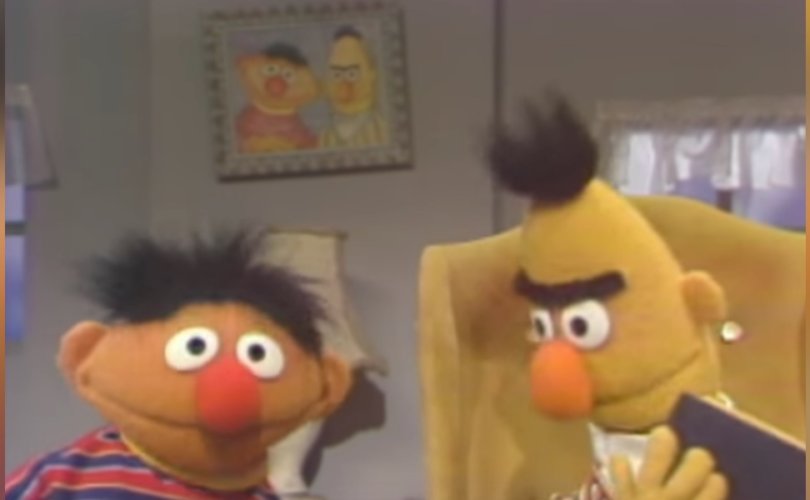 A 'Sesame Street' writer has said he modeled Bert and Ernie on his own homosexual life.YouTube

NEW YORK, September 19, 2018 (LifeSiteNews) – A former Sesame Street writer set off controversy by admitting he based the characters of Muppet live-in buddies Bert and Ernie on his own homosexual relationship.

Mark Saltzman wrote scripts and songs for Sesame Street from 1985 to 1998, and told Queerty* magazine Sunday he patterned Bert on his live-in long-term lover, film editor Arnold Glassman, and Ernie on himself.

“That’s what I had in my life, a Bert & Ernie relationship. How could it not permeate?” Saltzman said. “So I don’t think I’d know how else to write them, but as a loving couple.”

And the signals he sent were palpable, Saltzman conceded.

“I remember one time that a column from The San Francisco Chronicle, a preschooler in the city turned to mom and asked ‘are Bert & Ernie lovers?’ And that, coming from a preschooler was fun,” he recollected.

“And that got passed around, and everyone had their chuckle and went back to it. And I always felt that without a huge agenda, when I was writing Bert & Ernie, they were. I didn’t have any other way to contextualize them. The other thing was, more than one person referred to Arnie & I as ‘Bert & Ernie,’” Saltzman said.

But while Saltzman’s admission evoked cries of vindication from the LGBT movement that the longstanding rumors were true, Sesame Street Workshop and Muppet creator Frank Oz swiftly denied that Bert and Ernie are “gay.”

READ: Is Pampers dropping Sesame Street from diapers for being ‘too masculine’?

“I created Bert. I know what and who he is,” tweeted Oz, the actor and puppeteer who, along with the late Jim Henson, co-created many Muppet characters, and who played Bert to Henson’s Ernie.

And Oz dismissed a Twitter observation that “characters often evolve beyond their creators intentions, though” with: “Oh come on….”

It seems Mr. Mark Saltzman was asked if Bert & Ernie are gay. It's fine that he feels they are. They're not, of course. But why that question? Does it really matter? Why the need to define people as only gay? There's much more to a human being than just straightness or gayness.

In the ensuing heated Twitter discussion, Oz felt the need to clarify further: “When I wrote “They’re not, of course”, did you think I was saying something like, ‘They’re straight like everyone else.’? What I was actually saying was ‘They’re not, of course. Jim [Henson] and I never created them to be gay’. Just a misunderstanding. Thanks for for the discussion.”

Likewise, Sesame Workshop countered Saltzman’s revelations by tweeting that Bert and Ernie are “puppets and do not have a sexual orientation.” That tweet appears to have been deleted.

It followed that with a tweet emphasizing that “Sesame Street has always stood for inclusion and acceptance…Bert and Ernie were created to be best friends and teach young children that people can get along with those very different from themselves.”

Saltzman himself confirms the puppet duo were never officially “gay,” pointing out he tried to push overtly homosexual content but was shot down.

“I can remember pitching to the education department, the gatekeepers of the curriculum, gay content, just to get it off my conscience. And I can remember being stonewalled in a way that it made me think it was a lost cause,” he told Queerty*.

“My activism isn’t a hit the streets variety, and what Sesame Street was doing racially, you certainly don’t want to denounce it,” he added.

The 2013 New Yorker “Moment of Joy” cover — which portrays Bert and Ernie cuddling while watching news of the Supreme Court striking down the Defense of Marriage Act and California’s Proposition 8 — was a “kind of vindication,” Saltzman said, “but there’s not a Bert & Ernie float in the Pride Parade.”

Nevertheless, Saltzman’s revelations were met with jubilation in some quarters.

“Break out the white gowns, we’re having a coming-out party!” wrote Tony Bravo in the San Francisco Chronicle, adding that “gay puppet characters” are a cultural need.

“If Bert and Ernie’s inferred queer life together brought even one child comfort — either a child grappling with their own identity or the child of same-sex parents — imagine the good that an out and proud Bert and Ernie could do during those formative years,” he wrote.

“Sesame Workshop, don’t fight it any longer. Let the felt ones love one another!” Bravo enthused. “If Bert can stand Ernie’s ever-present rubber duckie and Ernie accepts Bert’s unibrow, who are we to judge?”