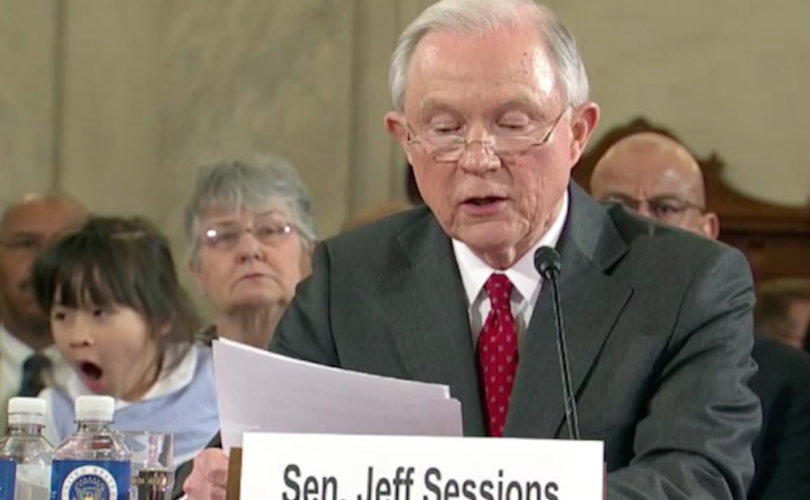 Protesters heckled Sen. Sessions before the Senate Judiciary Committee hearing even began in the historic Kennedy Caucus Room at the Capitol building. Intermittent shouting repeatedly peppered his introductory remarks until the demonstrators were escorted out by police.

Considered one of the most conservative members of the Senate, Sessions' confirmation is scheduled to continue Wednesday. During the first day of questioning, Sessions was asked about protecting the sanctity of innocent human life.

The first inquiry by a Democrat was about taxpayer funded abortion, prohibited by the Hyde Amendment but permitted by the Obama administration under the 2015 Justice for Victims of Sex Trafficking Act.

Sessions answered Sen. Dianne Feinstein, D-CA, that if confirmed as Attorney General, the Department of Justice under his leadership would defer to Congress, which created and passed the legislation.

Asked about enforcing legislation he disagreed with, Sessions answered, “A law has been passed … I will enforce it.”

Sessions did state clearly, however, his opinion that the infamous Roe v Wade Supreme Court decision legalizing abortion throughout all nine months of pregnancy for any reason violated the Constitution.

Feinstein continued to grill Sessions on his pro-life views. “You have referred to Roe v Wade as, quote, 'One of the worst, colossally erroneous Supreme Court decisions of all time.' Is that still your view?”

Sessions immediately answered, “It is.”

“I believe it is a violation of the Constitution, and really an attempt to set policy and not follow law,” Sessions explained. However, “It is the law of the land; it has been so established and settled for quite a long time, and it deserves respect, and I would respect it and follow it.”

Later on in the hearing, Sessions declined to hypothesize if he would, as Attorney General, file an amicus brief for or against Roe if the infamous decision were to face a high court challenge.

Sen. Richard Blumenthal, D-Conn., grilled Sessions on previous comments about Operation Rescue. Blumenthal charged that Operation Rescue advocates violence against abortion providers and asked him to disavow support for the pro-life group. He displayed a poster of the late abortion doctor George Tiller and accused Operation Rescue of calling for his murder.

“Will you disavow their endorsement of you?” Blumenthal asked.

“I disavow any activity like that, absolutely,” Sessions replied.

Sessions added, “And a group that would even suggest that is unacceptable, and I will enforce the laws that make clear that a person who wants to receive a lawful abortion cannot be blocked by protesters and disruptions of a doctor’s practice. I might not favor that. I am pro-life as you know, but we’ve settled on some laws that are clearly effective, and as Attorney General, you can be sure we would follow them.”

Operation Rescue immediately requested an apology from Blumenthal for suggesting that they condone violence.

“That was a cheap shot by a hack politician who thinks he can lie about us with impunity and without consequences in order to advance his political agenda,” Operation Rescue President Troy Newman said in a statement. “We are considering legal action to protect our good reputation.”

In another Feinstein line of questioning regarding homosexuals, Sessions reassured the senators that he would protect the rights of the same-sex attracted, saying he will follow the law.

“I understand the demand for justice and fairness made by our LGBT community,” Sessions read from a pre-written script. “I will ensure that the statutes protecting their civil rights and their safety are fully enforced.”

As a senator, Sessions co-sponsored the Federal Marriage Amendment, seeking an amendment to the Constitution defining marriage as between a man and a woman. He characterized the Obergefell v Hodges ruling that legalized same-sex “marriage” as “beyond what I consider to be the realm of reality.”

Sessions also opposed including free speech against homosexuality in hate crimes legislation, and he did not support gay activists' attempts to indoctrinate schoolchildren in “safe sex” practices to prevent HIV infection.

Sen. Orrin Hatch, R-UT, asked Sessions about federal obscenity laws, citing Utah's state legislature declaring pornography a “public health hazard.” In response, Sessions said he would consider bringing back adult obscenity prosecution by the Child Exploitation and Obscenity Section of the Justice Department, which was most active under the George W. Bush administration.