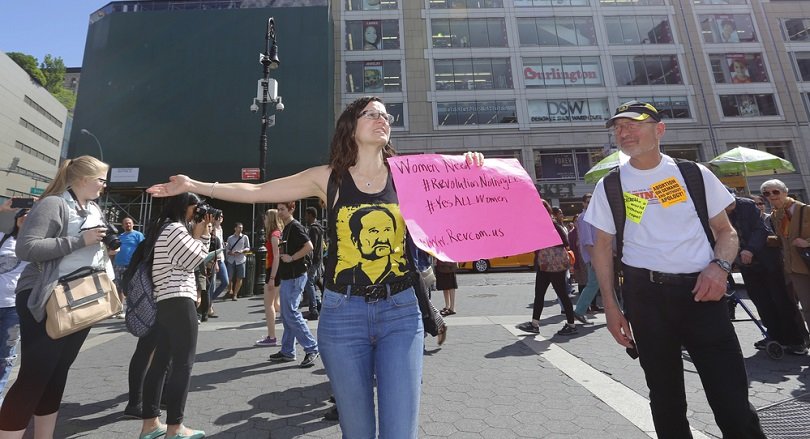 Stop Patriarchy staged the July 1 events to protest new laws set to come into effect that day in Kansas, Texas, and Tennessee, calling them part of a “national onslaught against abortion rights and birth control.”

Stop Patriarchy is a front organization for the Revolutionary Communist Party USA, a splinter group which views all sexual relations in free market societies as expression of male dominance. It advocates the use of “confrontational, dramatic non-violent” tactics to raise the alarm over recent legislative restrictions on abortion passed in Texas, Tennessee, and Kansas.

Their website added, “Over 330 restrictions have been introduced nationwide already this year…None of these laws have anything to do with ‘life.’ They are about slamming women back to the Dark Ages, reducing them to mere breeders.” For this the group blames “Chistian fascists,” “fundamentalists,” and, of course, men.

The seven women were released by police shortly afterward. The Seattle prosecutors’ office has not responded to LifeSiteNews queries about whether charges will be laid.

Seventy-five of its supporters briefly delayed hundreds of thousands of pro-life marchers for 20 minutes in Washington, D.C., during this year's annual March for Life.

The Seattle seven, like their counterparts in New York City, Los Angeles and Houston, wore white jumpsuits with the inner legs stained red for the blood of the women who they claim died getting illegal abortions in the U.S. and worldwide. They waved coat hangers and six-foot-tall pictures alleged to be of some of those women.

“To accumulate enough photos, Stop Patriarchy apparently had to go all the way back to…1929,” Jill Stanek commented.

“The coat hanger thing is baloney,” said Dan Kennedy, CEO of Human Life of Washington. “Everybody knows now that most illegal abortions in the U.S were done by fully qualified doctors. We should be talking about all the women dying from legal abortions.”

Only the pro-abortion protesters themselves reported the event, casting it in the heroic language of 1930s Communist Party rallies against capitalism. Get “on the right side of history,” the group’s webpage urged for the July 1 weekend across the U.S., by shouting out slogans such as “Abortion On Demand and Without Apology! Forced Motherhood is Female Enslavement! WE SAY NO MORE! End ALL Forms of Theocratic Bigotry!”

Kennedy’s view is that pro-abortion extremists are resorting to aggressive tactics because “they are well aware people are not buying their position anymore. They know they are losing their credibility.”

He credits the combined efforts of many different groups such as his own, of Youth for Life, and of women recovering from abortions for changing the public’s minds and of legislators.

“There has been a 16 percent reduction in abortion in Washington in recent years, but there are no restrictions,” Kennedy told LifeSiteNews.

Kennedy told LifeSiteNews that “the shift in public opinion has been coming for several years now. We saw it coming under the radar. Maybe these protesters should be paying less attention to women supposedly killed getting illegal abortions and show pictures of women killed by [Dr.Kermit] Gosnell.”