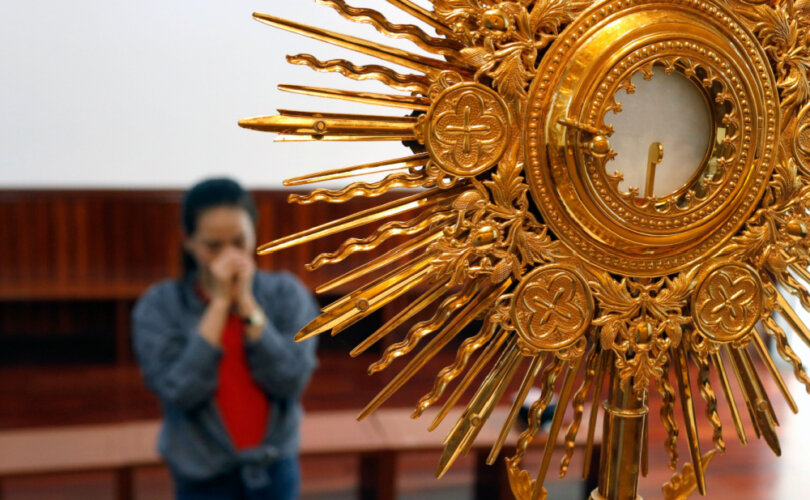 (LifeSiteNews) — The Seven Sisters Apostolate, founded in St. Paul, Minnesota, by Janette Howe and Fr. Joseph Johnson, assists parishes in organizing groups of at least seven women who dedicate themselves to praying for a particular priest each day of the week. Most are laywomen, though there are some religious sisters who participate. Howe told LifeSiteNews that since its founding in 2011, Seven Sisters has spread to 29 countries and now serves about 3,000 priests.

A group of Seven Sisters may commence when at least seven women commit to offer a holy hour for a particular priest on a specific day of the week such that all seven days are covered.

The organizer of the group, called the anchoress, commits to her role for two years. The anchoress is the primary contact for the priest. She explains the apostolate to him, and she passes information back to the women that may guide their prayers, such as particular intentions or favorite saints. She also prays for the group’s fidelity and answers any questions. At the end of her term, the anchoress may pass the role to another woman or recommit for another two years.

The women in the group commit to their roles for one year. The commitment of each woman is to a particular day of the week – Sunday, Monday, etc. On her assigned day each week, the woman offers a holy hour of prayer exclusively for her priest — for his sanctity and for an ever-increasing devotion to the Blessed Virgin. She may also pray for the men in authority above the priest — his bishop and the Pope.

Each priest decides whether he wants to know the identity of his Seven Sisters, though most Sisters prefer to serve anonymously, trusting that God will reward the prayers they offer in secret. The group is not limited to seven women. Other women may join as substitutes, or multiple women may arrange to share a day.

The ideal place for prayer is an adoration chapel before the Blessed Sacrament or in a church before the tabernacle. However, if a woman cannot make it to these places, then she can offer her holy hour anywhere. Thus, women can maintain their commitment even when homebound or traveling.

In any parish, the first priest to be covered must be the pastor for the parish, because he is the shepherd. If there are assistant pastors or retired priests in the parish, other groups may be organized for them, but only after the pastor is covered.

To begin a new group, Howe recommends first speaking to the priest for whom the group will pray. The next step is to invite women to join. Once the group is formed, the anchoress registers the group with the apostolate, which provides a welcome letter and periodic encouragement.

Some U.S. dioceses have coordinators who can refer women to existing groups or recommend priests for new groups. Women can find such coordinators on the Seven Sisters website.

“Allow the Holy Spirit to school you — you are in his school of intercession,” Howe responded when asked how women might pray. “We offer some suggestions, but we encourage women to listen to the Holy Spirit to know what the priest needs each week.”

Lydia Donahue, an anchoress for a Seven Sisters group in Knoxville, Tennessee, told LifeSiteNews that she read about the apostolate in her church bulletin. She recognized the similarity to the Handmaids of the Precious Blood, a cloistered religious order in east Tennessee dedicated to praying for priests. Further, she understood the need because her brother and son are priests. “Our priests are so under attack — they really are,” Donahue said.

Since her pastor was already covered, Donahue decided to form a new group for an associate pastor in her parish, whom she has known since his childhood. “Not one person I asked said, ‘No, I can’t do it — I don’t have time.’ Everyone said, ‘Yes, this is what we really need,’” Donahue reported.

To get started, Donahue gathered the women together for an in-person meeting, explained the mission, and gave each lady a printed reference booklet. The ladies exchanged contact information so that they could communicate with each other, especially to arrange for substitutions.

In an EWTN interview, Fr. Johnson made an analogy to a story in Scripture describing a battle between the Israelites and the Amalekites: “In Exodus, Moses is interceding for the people. As long his arms are raised up, the battle goes in favor of the Israelites, but he gets tired. It’s a lengthy battle. Any time he would lower his arms, the battle would go against the chosen people. So they got him a rock to sit on. Aaron and Hur propped up his arms, and they won the day.”

“We have an obligation to pray for priests,” Howe said. “This particular way appeals to many women as an expression of God’s heart.”