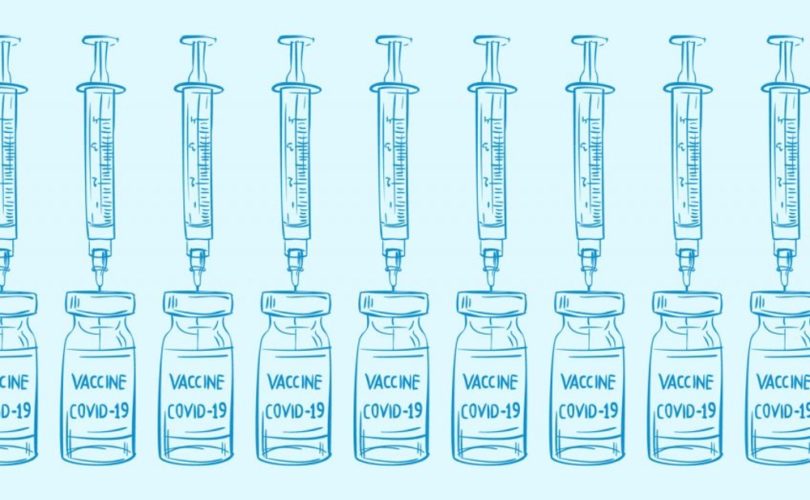 (LifeSiteNews) – At least ten states and several major cities have enacted another round of severe COVID-19 vaccine mandates in the past week, targeting millions of teachers, healthcare workers, customers, public employees, and students. The latest mandates, which often do not include testing alternatives, follow a wave of vaccine requirements imposed by around a dozen mostly Democrat-controlled states two weeks ago.

On Thursday, Massachusetts Gov. Charlie Baker (R) announced a strict vaccine mandate for tens of thousands of state employees, requiring them to show proof of COVID-19 vaccination by October 17 or face termination, the Boston Globe reported. The order does not allow a weekly testing option for those who decline the shots.

The mandate applies to around 42,000 executive department employees and 2,000 contractors, including teleworkers, according to the Globe. Baker had issued a similar dictate for long-term care facilities this month.

“As the largest employer in Massachusetts, we felt it was important for us to step forward and make a statement about the value and the importance of getting vaccinated, and I certainly hope that many other employers will take a look at what we’re doing here and follow suit,” Baker told reporters. The Republican governor earlier this year had dismissed the idea of making COVID-19 vaccination compulsory, saying that he would not “kick somebody out of a job” for refusing a vaccine that did not yet have full FDA approval.

None of the coronavirus vaccines in use in the U.S. were fully authorized by the FDA when Gov. Baker announced his order. The agency approved the Pfizer-BioNTech vaccine Monday.

Baker’s reversal has drawn sharp backlash from unions, such as the Massachusetts Correction Officers Federated Union, which said Thursday that is has “begun the process of pursuing all legal and legislative remedies at our disposal, up to and including an injunction in court.”

Gov. Ned Lamont (D) of Connecticut unveiled new vaccine requirements on Thursday as well, directing all state employees, public and private K-12 teachers and staff, and childcare workers either to be vaccinated or to submit to a weekly testing program by September 27. The health insurance plan for Connecticut employees does not cover asymptomatic testing for COVID-19, forcing the unvaccinated to pay out-of-pocket for tests, the state health commissioner said.

Long-term care staff and state workers at hospitals, however, cannot opt for testing in lieu of vaccination, and would need a medical or religious exemption to get around the mandate, as is the case in Massachusetts. “Each request for an exemption will be considered on an individualized, case by case basis,” Lamont’s order states. “Employees who have applied for an exemption must provide appropriate supporting documentation upon request,” it adds.

Another executive order issued by Lamont allows health officials to access vaccination status of all people within their jurisdictions.

Days ahead of his resignation amid sex abuse and nursing home scandals, Gov. Andrew Cuomo (D-NY) last week also imposed a broad vaccine mandate for hundreds of thousands of healthcare workers in New York. Hospitals, long-term care facilities, and nursing homes must “develop and implement a policy mandating employee vaccinations, with limited exceptions for those with religious or medical reasons,” a press release from his office last Monday read.

Every Northeast state except New Hampshire, which banned COVID-19 vaccine mandates by government entities last month, has enacted vaccination requirements of some kind since July. The mandates come even as data increasingly highlights the inability of the vaccine to stop COVID-19 transmission or serious cases of the virus, and as hospitals grapple with massive shortages after laying off unvaccinated workers.

Mass mandates for teachers and students

Washington enacted an unprecedentedly strict vaccine mandate for teachers on Wednesday, with Democratic Gov. Jay Inslee announcing that an estimated 363,000 K-12 and higher education employees must prove that they have been “fully vaccinated” by mid-October as a condition of employment. Inslee did not allow a testing opt-out, mirroring his earlier requirements for public workers.

The restrictions impact employees at state colleges and universities, as well as at public, charter, and private K-12 schools, including bus drivers and volunteers, the Associated Press reported. “By not allowing a testing option, Inslee’s mandate appears to be the most sweeping of actions taken by any other state,” the outlet said.

Just a day later, Gov. Kate Brown (D) revealed that K-12 teachers and staff in Oregon will similarly need to show proof of vaccination by October 18, or six weeks after a COVID-19 vaccine receives full authorization from the FDA, whichever comes later. Brown, who has already required the shots for state and healthcare employees, also retracted a weekly testing option she previously issued for healthcare workers.

Oregon’s vaccine requirements do not currently apply higher education institutions or childcare centers, though Brown said Thursday that “All options are on the table.”

New York City followed the lead of the West Coast states on Monday, with a flat-out vaccination mandate for roughly 148,000 public school teachers and staff. A similar order is expected this week in New Jersey.

And in both Nevada and Philadelphia, officials have recently mandated that all college students must get COVID vaccines in order to attend classes. On Friday, the state board of health passed a measure that requires vaccination for over 100,000 college and university students to enroll in classes for the spring semester, News 3 reported.

Philadelphia had moved two weeks ago to make COVID-19 vaccines compulsory for college students, as well as for state, healthcare, and education employees by October 15, except in cases of religious or medical exemptions. The archdiocese of Philadelphia has told priests not to sign exemption requests, and many nominally Catholic institutions in the city, like St. Joseph’s University, have already mandated the abortion-tainted shots for students and staff.

Not to be outdone, California, the first state to announce COVID-19 vaccine or testing requirements for education and state employees this year, also moved forward with another set of vaccine restrictions last week.

Indoor events in the state with more than 1,000 people will require proof of vaccination or a negative coronavirus test for entry starting September 20, local news reported Wednesday. A proposed policy in San Jose would set the cap for indoor events at city-owned facilities a mere 50 and would strictly require vaccination.

Other COVID-19 vaccination requirements have been reported in the past week in Puerto Rico, Colorado, New Mexico, Maryland, Washington, D.C., Chicago, and Fairfax County, Virginia, among other places, amid mass protests against mandatory jabs rise across the country.

Arizona banned vaccine mandates by public entities in June, though that law does not take effect until late September, and the deadline for Tucson’s mandate is August 24. Around 20 Republican-led states have enacted laws similar to Arizona’s, according to Ballotpedia.

Ducey’s order is effective immediately, a statement from his office said, and violations could lead to up to $500 in fines or a month in jail, though Tucson has disregarded it, the Arizona Republic reported. Ducey and Arizona Republicans have so far done nothing to ban private employer-based mandates, which only Montana has outlawed.