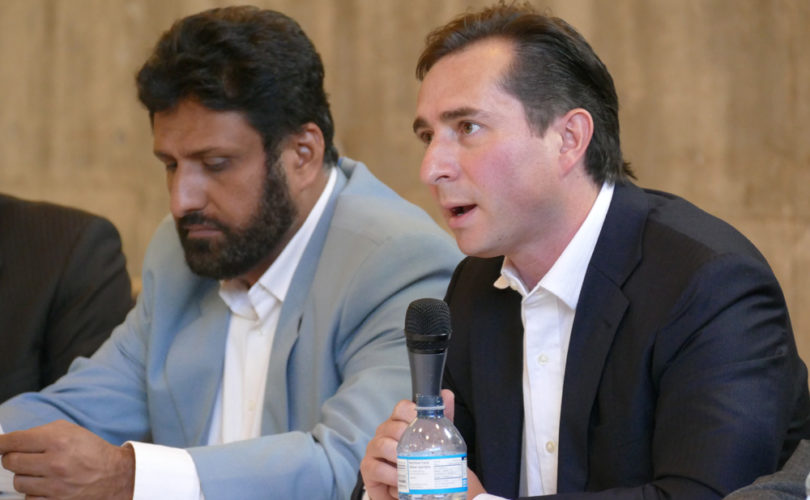 TORONTO, ON, October 2, 2015 (LifeSiteNews) – Opponents to the Liberal government’s sex-ed curriculum say that Premier Kathleen Wynne’s comments accusing them of being motivated by “homophobia” is part of a “calculated smear campaign” and shows they’ve got the premier on the run.

Wynne told the Toronto Sun Thursday that while “the values of the vast majority of people in Ontario are not ones of homophobia” there is “a group of people trying to stir up these very destructive and divisive attitudes.”

While Wynne’s comments came on the day of a province-wide student strike protesting the sex-ed curriculum, she was referring specifically to Thorncliffe Park elementary school in her Don Valley West riding, which on October 1 was emptied of more than half its student body.

The predominately Muslim community has become the major flashpoint in the province’s sex-ed controversy, and Thorncliffe Parents Association (TPA) announced that they will keep their kids out of school all October, following an unprecedented student strike that’s been ongoing since September 8.

Admittedly frustrated by the continuing protests, the embattled Crane told Metro Morning host Matt Galloway that the “reasonable parents believe that some of this content is being presented too early to students.”

On “the other extreme” are parents who believe that “that this is a homosexual indoctrination of Ontario, Kathleen Wynne wants half of Ontario gay by the time she’s done,” Crane said. “People have said that to me.”

And he added that TPA’s Facebook page “has said right out front that the problem is there are gay teachers in schools and gay consultants and it’s become more of a situation about that, than it is about the curriculum.”

But according to TPA President Khalid Mahmood, his group “has no issue with same-sex attracted teachers” and to allege that would be “pure slander.”

These remarks are “a case of our statements and our stance being twisted by the Premier’s team so as to damage the reputation of parents who oppose the controversial curriculum,” he told LifeSiteNews in an email.

TPA holds that “in a public school setting, teachers should never be discriminated against on the basis of their sexual preference. We respect their dignity and humanity, just as we respect all people,” said the father of five.

But what Thorncliffe Park parents and the Canadian Families Alliance – the grassroots coalition that organized the province-wide October 1 action – do object to is what they see as the curriculum’s promotion of the LGBTQ lifestyle.

“We oppose when lessons go beyond the level of teaching kids to have respect for people,” and instead start “promoting values to our children that contradict our deeply-held moral and religious beliefs,” Mahmood said.

It was Wynne and Crane who chose “regrettably to describe opposition with this word in order to dismiss the fact that many parents in the province just don’t want the radical sex curriculum taught to their children,” he told LifeSiteNews.

“The real problem is that the controversial curriculum violates parental rights and cultural values.”

Jack Fonseca of Campaign Life Coalition agrees. “This is a calculated smear campaign against parents,” he said, adding that Wynne has done so before, notably when she labeled protestors at the February 24 Queen’s Park rally as homophobic. “But parents saw through her bully tactic and continued growing the parental rights movement.”

While it comes as no surprise that Wynne is “recycling her old tricks,” Fonseca finds it “repulsive” that the premier is “attacking the very parents she claims to have consulted.”

Mahmood agrees. His group has been trying to get a hearing from the Ministry of Education for three years – long before the curriculum was introduced – about their concerns, he says.

These include the theory of  “gender fluidity” and “getting people to believe that being a boy or a girl is merely a ‘social construct’,” he stated. Current social-scientific studies document that societal acceptance of these gender identity theories “can only produce sexual confusion and increased suicide attempts later in life,” Mahmood said. “Our concerns are about the safety of children.”

But the “ministry is continuously refusing to hear us, and falsely labelling us as ‘homophobes’,” he told LifeSiteNews. “We have been excluded and no one is worried about that. Is this the right way to deal with parental concerns?”

That’s a question for which Tory MPP Monte McNaughton, a staunch and outspoken critic of the sex-ed curriculum, has an answer.

“As a parent and a taxpayer, I believe it is unthinkable and inexcusable that the government refuses to acknowledge the concerns that hundreds of thousands of people have shared over this issue,” McNaughton, a father of a two-year-old daughter, told LifeSiteNews in an email.

While McNaughton has consistently maintained that “this issue is about parents knowing what is best for their children, not the government,” he himself was the target of a homophobia smear tactic orchestrated by Wynne and her partner, Jane Rounthwaite, as revealed in a leaked copy of a TVO documentary.

McNaughton countered then that such an attack was “unprecedented” but, like Fonseca now, he wasn’t surprised.

“This premier’s taken this to a very personal level,” he told LifeSiteNews in an interview at the time. “The people who are pushing for this are aggressive, they’re outspoken and they’re intolerant of different points of view.”

Fonseca also faults the mainstream media for not fairly and impartially telling the parents’ side of the story, and particularly the CBC in this instance for having “uncritically accepted Principal Crane’s claims of what some unnamed parents allegedly told him.”

“At one level, it’s more disappointing to see the media working so hard to protect Kathleen Wynne, by deliberately putting out these distorted hit piece on parents,” he stated, adding that such one-sided reporting amounts to “media malpractice.”

But while such uncontested “drive-by smears” by the Liberal government “distort” and “distract from parents’ legitimate concerns,” Fonseca says they also demonstrate that “the one-day student strike really scared the Liberals.”

“They are really worried about the growing parental rights movement,” he observed, “and are resorting to desperate tactics and fear-mongering in an attempt to slow it down.”