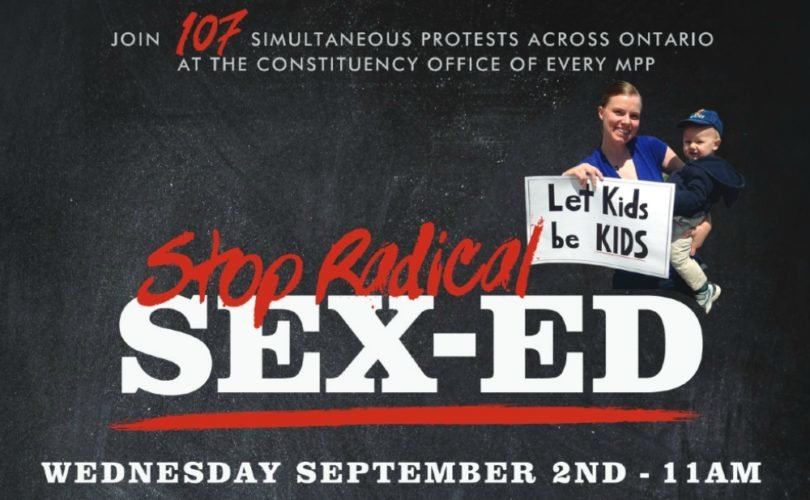 TORONTO, August 12, 2015 (LifeSiteNews) – As the reality of the Liberal government’s roll out of its radical sex-ed curriculum looms, parents are mobilizing for a massive protest at all MPPs’ offices September 2, say organizers.

“Our goal is to make this the biggest protest in Ontario’s history, by holding 107 simultaneous mini-rallies at the constituency office of every single MPP in the province,” says Jack Fonseca of Campaign Life Coalition (CLC), which is spearheading the event.

“On the same day, at the same hour, right across this province, parents will stand in solidarity to protect their children from being prematurely sexualized by a harmful sex-ed curriculum.”

CLC is joining forces in the protest with Canadian Families Alliance (CFA), an umbrella group of more than 25 parent associations, cultural and faith organizations and social media groups representing an estimated 200,000 Ontarians.

A one-time tenured professor and member of Premier Kathleen Wynne’s transition team, Levin was arrested in July 2013 and is now serving a three-year sentence on three convictions of child pornography.

As Fonseca pointed out, one goal of the September 2 protest is “to ensure that every single MPP feels the pressure to work against this radical sex-ed agenda, which was written under none other than a convicted child pornographer.”

And while then-Premier Dalton McGuinty scrapped the 2010 sex-ed prototype because of parental outcry, Wynne so far has refused to do the same.

“What is frustrating for all of us as parents is that the premier is not budging,” says Farina Siddiqui of the Coalition for Concerned Parents, a CFA member. “She won’t listen to us at all. She doesn’t have any sensitivity towards the needs of the parents or our concerns.”

That’s despite widespread protests against the sex-ed curriculum including a 5,500-strong rally at Queens Park on June 7, and an 185,000-name petition to repeal the curriculum that Tory MPP Monte McNaughton earlier introduced in the legislature.

Christina Liu of the Parents Alliance of Ontario (PAO), another CFA affiliate, agrees. “We have been going to Queens Park and nobody addressed our concerns,” she told LifeSiteNews.

Liu urged parents to take their concerns right to their MPP on September 2. “We need to go there and let our voice be heard.”

“When we go to MPPs offices, they know that this is exactly their constituents, and they have to address our concerns,” she stressed.

“Because if today you don’t listen to your constituents, then tomorrow people won’t vote for you. That’s the clear message that we need to get out.”

Taxpayers have a right to publicly funded education that provides “sufficient protection to our next generation,” said Liu. “Education is the fundamental service in a society, we have to make sure it is correct right from the source.”

Fonseca, who has children in the Catholic elementary system, and speaks frequently on the curriculum's incompatibility with Catholic teaching, is confident that parents won’t give up. There’s too much at stake.

“The Wynne regime hasn’t yet figured out that it’s one thing to swindle taxpayers out of billions of dollars with wasteful spending, or to get caught cheating in elections,” he said, referring to the Sudbury scandal in which Liberal operatives allegedly offered a candidate incentives to withdraw from a byelection there.

“But when you start messing with our young children, you cross a line and provoke parents to fiercely defend their kids.”

The province-wide protest is intended “to send a loud, clear message to the Liberal regime of Kathleen Wynne that this issue will not go away,” and to warn her that  “if she does not repeal the radical program, it will cost Liberals in the next election,” he stated.

According to Siddiqui, that’s already happened.

“I really don’t trust our government, especially Liberals,” said Siddiqui, who is active in the Muslim community in Wynne's own riding of Don Valley West. “I’m honestly working hard to make sure they don’t win federally. Honestly, I’m so disgusted.”

CLC’s website includes sign-up information, a downloadable poster, details of the sex-ed curriculum, and how to find your constituency. As of deadline, there were protests planned in 40 ridings.

“We encourage every parent, grandparent, and concerned citizens in general, to sign up for a mini-protest in their riding,” Fonseca said. “Help us make this a huge success.”

To find out more, or to sign-up for a protest your area, go here and enter your postal code.