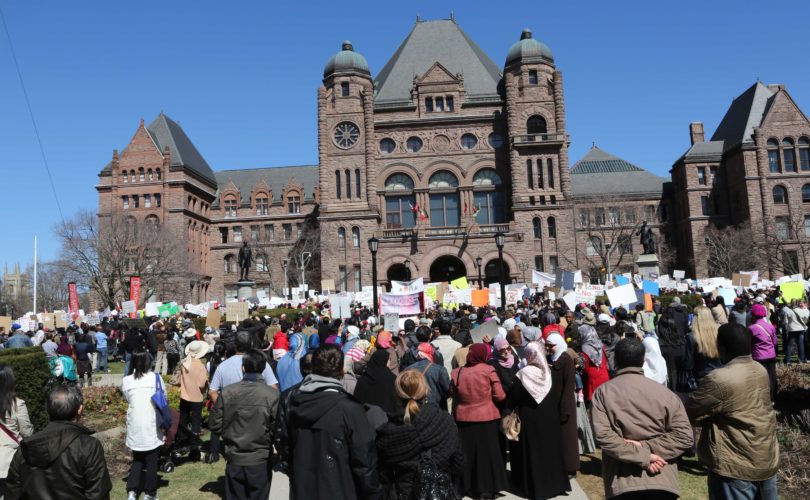 5,000 parents joined a rally in Toronto on April 14 to protest the Wynne sex-ed curriculum.Steve Jalsevac / LifeSiteNews

TORONTO, May 26, 2015 (LifeSiteNews.com) — A newly formed umbrella group is holding a June 7 Family Sit-in and March at Toronto’s Queen’s Park that organizers expect will draw 7,000 to 10,000 people to protest the Liberal government’s controversial sex-education curriculum.

CFA expects more organizations to join the alliance, which unites parents from different political, cultural, and religious backgrounds on the one issue of opposing the Wynne government’s new sex-education curriculum.

The 4-hour event begins at 2 p.m. at Queen’s Park with families for a rally and speeches while enjoying their own picnic lunch (portable outhouses will be set up) after which participants will march south on University Avenue, east on Dundas Street to Bay Street, north to College Street then west, back to Queen’s Park which will mark the end of the day's events.

Despite the growing outcry, Premier Kathleen Wynne has refused to back down on the Liberals’ plan to roll out the radical sex-ed curriculum in provincially funded schools in September 2015.  The Liberals have a majority government and the next provincial election is scheduled for October 2018.

The social media groups that are part of the Canadian Families Alliance are found on the following Facebook pages: We say No!!!; My Child My Choice; Stop the Dangerous Sex Ed in Ontario and Alberta; Parents and Students on Strike; Boycott EQAO Testing; Parents Against Ontario Sex-Ed Curriculum; Parents Without Borders Against Radical Sex-Ed.