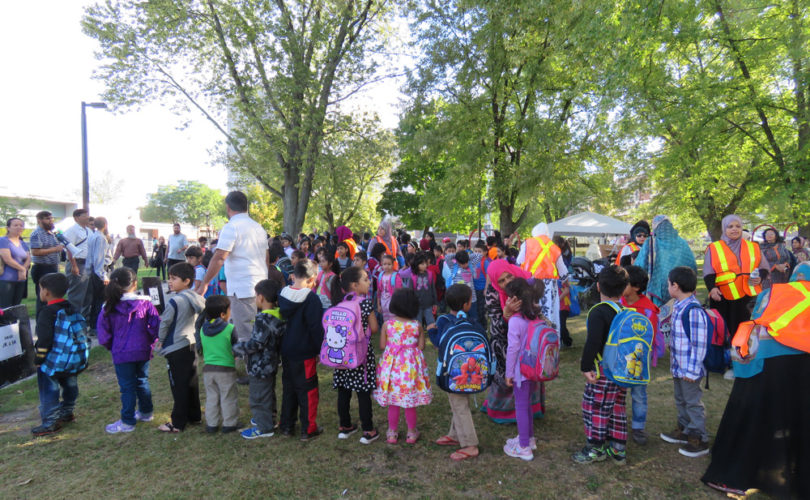 Students line up at the 'school in the garden' organized by parents of the Thorncliffe Park Public School in Toronto.Lianne Laurence / LifeSiteNews

TORONTO, September 10, 2015 (LifeSiteNews) – A student “strike” to protest the Liberal government’s sex-ed curriculum that emptied half a Toronto public elementary school the first day of class and captured international media attention will continue throughout September, say organizers, who urge parents across Ontario to do likewise.

About 700 students of Thorncliffe Park Public School – or 50 percent of the student body – stayed away from school Tuesday and assembled instead in a nearby park for what strike organizer Khalid Mahmood of Canadian Families Alliance (CFA) styled the “school in the garden.”

The predominately Muslim neighborhood of Thorncliffe Park in Premier Kathleen Wynne’s Don Valley West constituency has been a major flashpoint of sex-ed opposition since the Liberals released the curriculum last February for a September roll out in all the province’s publicly funded schools.

Within three months the CFA, a grassroots parents’ rights coalition representing about 25 associations and 200,000 concerned Ontario citizens, was formed. CFA contends that the curriculum violates children’s innocence by pushing a morally offensive and physically dangerous sexual agenda, and it is spearheading the Thorncliffe Park “No school in September” strike.

With the public riveted by images of children sitting on tarps under trees chanting their A-B-Cs, and of hundreds of parents marching to the school to hand principal Jeff Crane their letters of intent to homeschool, Campaign Life Coalition’s Jack Fonseca says parents across Ontario should follow Thorncliffe Park’s lead.

“Liberals are shaking in their electoral boots, and the media is finally acknowledging the commitment and size of the parental rights movement,” Fonseca says of the unprecedented action.

The parental backlash even has pro-abortion and openly homosexual Rob Oliphant, the federal Liberal candidate in Don Valley West, claiming to be against the sex-ed curriculum, Fonseca told LifeSiteNews in a telephone interview. “He’s pretending he’s opposed to it because he’s scared of losing votes.”

“That speaks to the tremendous influence that these protests, and most especially the Thorncliffe Park student strike, emptying the schools, have had,” Fonseca said, noting that the strike has put “so much pressure” on the government and school boards.

Indeed, principal Crane told the Toronto Star Tuesday that he’s facing “significant cuts” to his 89-member staff if enrolment at the Grade 1 to 6 school doesn’t increase within the month.

Although it’s too early to know how many parents will stay the course – the “school in the garden” enrolment decreased from roughly 700 to 400 to 200 children by the third day – CFA’s Mahmood is confident the numbers will remain exceptionally high for the entire 30 days.

Enrolment in the “school in the garden” will increase on Monday, he predicts, when the venue moves from the park to the Thorncliffe Park library. The second day was “horrible” because the children were drenched with rain and had no shelter. Donated canopies served as makeshift classrooms on Thursday – and Friday is a holiday.

Mahmood told LifeSiteNews that some parents also had been disturbed by a rumour – the source of which is yet to be confirmed – that they could be fined $200 for pulling their kids from school. “But we are going to kill the rumour,” he said.

Meanwhile, Fonseca emphasized that it’s not too late. “Even if your elementary school children already went to their first day of school, you can still pull them out,” he advises parents, who must also notify the “teacher, principal and school trustee of the reason” behind their action.

Meanwhile, for parents who do not wish to engage in a strike action but rather, are seeking a permanent alternative to public school for their children, CFA member the Well-Informed Parent has been working through the summer to help parents find such an alternative.

According to director Liliane Bahloul, those alternatives include homeschooling, private schools, part-time enrollment in public schools, lobbying the government for publicly funded independent schools, or forming a “co-op” school.

Bahloul, who was a vice-principal with the North York French public board Conseil scolaire Viamonde for four years, and is now a self-employed educational consultant, says that she knows of 71 children, so far, pulled this fall from public schools because of the sex-ed curriculum.

Of these children, who hail from Mississauga, Milton, Aurora, and London, 34 are being homeschooled, and 37 are enrolled in co-op schools.

One of the novice homeschoolers, London parent Nikee Steinhoff, told LifeSiteNews in an email that “with a two-month-old, a two-year-old and my four- and six-year-old, it’s no doubt a challenge and we hate taking them out of their beloved school.”

“However when it comes to protecting your children from perceived danger, you just do whatever you need to do!” she wrote.

“There is no doubt I’m exhausted at the end of the day, but I have a renewed faith in myself and my own abilities and my kids and I are bonding more than we ever have,” Steinhoff said of her homeschooling efforts thus far, which began during the summer.

“So there are some positives in all of this,” she stated, adding, “not that I plan to back down from the fight anytime soon!”

Thorncliffe Park mother-of-two Maria Saulat told LifeSiteNews she intends to keep her kids home from school for a week, and if the Liberal government does not repeal the sex-ed curriculum within that time, she will then enroll her daughters, in Grades 3 and 5, in an Islamic school.

Nuzhat Khan, whose three sons are in Grade 7, Grade 4 and senior kindergarten, and Rabiya Shiras, who has a five-year-old son and a seven-year-old daughter, said they will do the same.

A family doctor in her native Pakistan, Saulat said she and her husband came to Canada in 2008 for the educational opportunities. “Now we are here and we are getting nothing.”

The Islamic co-op schools are offering a cut-rate tuition of $200 per month per child, with an additional $100 for transportation, Saulat said, adding that she and her husband are willing to make the sacrifice.

“We will work hard, we will do double shifts,” she said. “There is no way we will send the kids back to school if [the Liberals] don’t change their policy.”