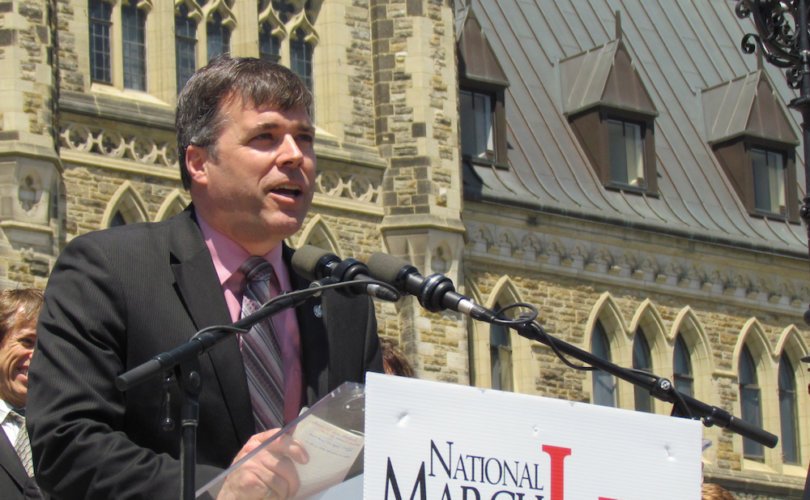 OTTAWA, December 13, 2016 (LifeSiteNews) – Conservative leadership candidate Pierre Lemieux says he wants to start a debate on sex-selective abortion, which could account for a deficit of 4,400 Indo-Canadian girls over the last 20 years.

Lemieux, a former MP with a strong pro-life and pro-family record, has released a short video statement calling for “a thoughtful and respectful debate” about gender-selective abortion. The deadly practice has led, according to a recent study of 6 million births between 1990 and 2011, to 138 Indo-Canadian live male births compared with 100 live female births.

“I believe that it is wrong to end a pregnancy based solely on the belief that a baby girl is worth less than a baby boy. As the father of four daughters, this issue is particularly close to my heart,” Lemieux declares as the video shows a picture of his four beaming young girls. “And I stand with those Canadians with serious reservations about gender-selective abortion. I want to speak out on behalf of these baby girls and have a respectful discussion on the issue.”

Even though Lemieux’s position is a popular one with Canadians, one party insider is already criticizing Lemieux. Michele Austin, a political strategist and a supporter of current, temporary leader Rona Ambrose, commented, “There's a crowded field and everybody's trying to get votes. So, from a strategic point of view, we shouldn't be surprised about it, but I think that a lot of Conservatives are going to be disappointed if this hijacks the agenda.”

Activist Joyce Arthur of the Abortion Rights Coalition of Canada opposes a ban on sex-selective abortion, saying that while her group is opposed to the social or cultural beliefs behind gender-based abortion, education and not criminalization is the solution. If ultrasound testing to reveal gender were refused, women would simply go the United States for their tests, she argued. “Being pro-choice means the woman gets to decide for her own reasons and we don’t have to agree with them to support her right to abortion. Women do not have to state a reason for abortion in Canada.”

Lemieux strove to frame his appeal in the context of Canadian values. After paying tribute to the “brave men and women” in Canada’s armed forces who have fought to “defend democracy,” he asserted, “In a democracy such as ours, there should be no debate that is closed. Sensitive issues require thoughtful and respectful debate.”

“I believe,” Lemieux said, “that politicians should have the courage to debate these issues in an open and respectful way.”

A new poll by Forum released last week after the second leadership debate in Moncton revealed that many of the 14 candidates have hardly registered. Four candidates — Michael Chong, Chris Alexander, Steven Blaney and Lisa Raitt — are tied with only 8 percent of the Conservative supporters each. Chong led among Canadians in general with a paltry 6 percent of their support. Lemieux’s support is so low it does not register in the poll.

After Lemieux’s announcement, fellow leadership candidate — and fellow social conservative — Brad Trost spoke in support, noting that the Conservative Party had officially condemned gender selective abortion. “Pierre and I are endorsing party policy and I think the other candidates in the leadership race need to say, do they or do they not support party policy when it comes to gender-selection abortion?”

The research, based on studying 6 million births over 20 years, showed that if the family has already aborted one child, it is even more likely they will abort subsequent female unborn.

Based on the standard ratio of male to female births of 107 to 100, the study suggests 4,400 Indo-Canadian unborn babies were aborted during the 20-year study period, just because they were female.