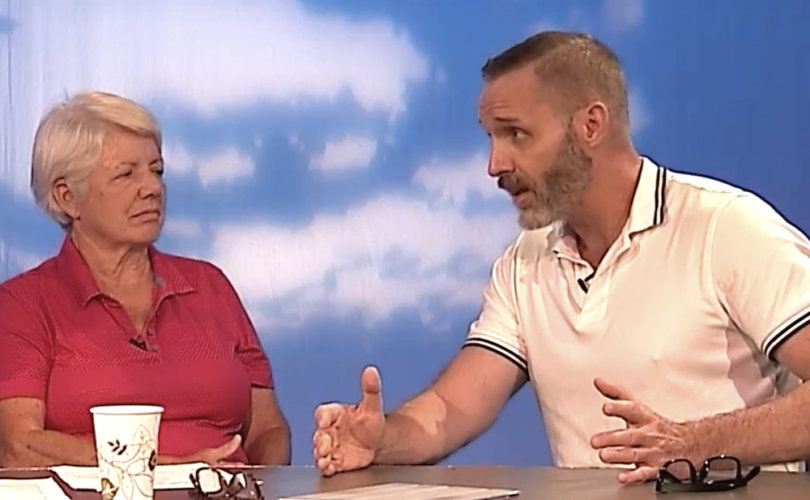 Michael Meenan says he was sexually abused by Catholic men as a teen. Gay USA screenshot

November 1, 2018, (LifeSiteNews) – An auxiliary bishop in the Archdiocese of New York City has been removed from public ministry after having been credibly accused of sexual abuse with a 13-year-old male.

In a sober address to the archdiocese posted on Facebook, Cardinal Timothy Dolan said, “I’ve got some sad news to tell you, and I want you to hear it from me before it goes public, because I owe it to you.” Dolan then went on to explain why Auxiliary Bishop John Jenik is stepping aside.

The allegation, which dates back to the early 1980s, is just one more shocking story on top of hundreds of others revealed since the summer regarding mostly homosexual abuse by priests and prelates in the Catholic Church in the United States.

“The Lay Review Board has carefully examined the allegation, which concerns incidents from decades ago, and concluded that the evidence is sufficient to find the allegation credible and substantiated,” Dolan said in a letter addressed to the entire archdiocese. “Although Bishop Jenik continues to deny the allegation, he has stepped aside from public ministry and has moved out of his parish.”

Cardinal Dolan has also published a letter, dated October 29, sent to parishioners at Our Lady of Refuge in the Bronx where Bishop Jenik has been stationed for 40 years, and has been pastor since 1985.

“An allegation of inappropriate behavior with one person was brought against Bishop Jenik,” wrote Dolan. “This was the first time any such allegation about him was ever made. Although the alleged incidents occurred decades ago, the Lay Review Board has concluded that the evidence is sufficient to find the allegation credible and substantiated.”

In a separate letter to his parishioners, Bishop Jenik wrote, “While I have the utmost respect for both the IRCP and the Review Board, and I know that they have a great burden as they confront the evil of sexual abuse, I continue to steadfastly deny that I have ever abused anyone at any time. Therefore, I will ask the Vatican, which has ultimate jurisdiction over such cases, to review the matter, with the hope of ultimately proving my innocence.”

Michael J. Meenan, the man who says Jenik abused him when he was a young teen, told the New York Times, “There must be a price to pay for this.”

Now 52, Meenan explained that he was about 13 when he met Jenik through the sacrament of confession. Jenik soon became a friend of the Meenan family in what turned out to be the first step in grooming the boy for sexual abuse.

According to the NYT report:

Within months, the priest was taking him out for dinner and movies and serving him alcohol.

According to Mr. Meenan, he also began taking the boy for overnight stays at a house he owned in Tivoli, N.Y. Often it was just the two of them, and there would be more drinking. Mr. Meenan said his parents consented to the arrangement because they implicitly trusted the priest.

“I was conditioned to do this,” Mr. Meenan said. “I was doing exactly what I was supposed to do.”

During those visits, he said, he and the priest would usually sleep in separate beds. But, he said, on one occasion when Mr. Meenan was 15, the two shared a bed. Mr. Meenan described the priest — who had been drinking — rubbing and patting the sides of his body over the blankets. Mr. Meenan said he was frozen with terror as it happened.

“The weirdest, creepiest part was how he was putting his mouth next to my mouth, as if he was taking my breath,” he said.

This wasn’t the young Meenan’s only experience of sexual abuse by an adult male through his involvement in a Catholic institution.

While a student at Fordham Prep, a Jesuit all-boys high school in the Bronx, Meenan was sexually abused by a religion teacher at a ‘sleepover party.’

The “teacher who had driven him to the party performed oral sex on him while he slept in a room along with others,” reported The New York Times in a separate 2016 article.  “When he woke up and pulled away, sliding beneath a coffee table, Mr. Meenan said, the teacher grabbed his leg and tried to drag him back.”

Despite reporting the abuse to the headmaster at the time, nothing happened. It wasn’t until two years ago that school acknowledged wrongdoing by the teacher.

The teacher “groomed the victim for months by gaining his trust, socializing with him and giving him alcohol before sexually assaulting him,” according to Meenan’s attorney, Mitchell Garabedian.

After graduating from Brown University, Meenan, who as an adult identifies as “gay,” went on to become a journalist and educator.