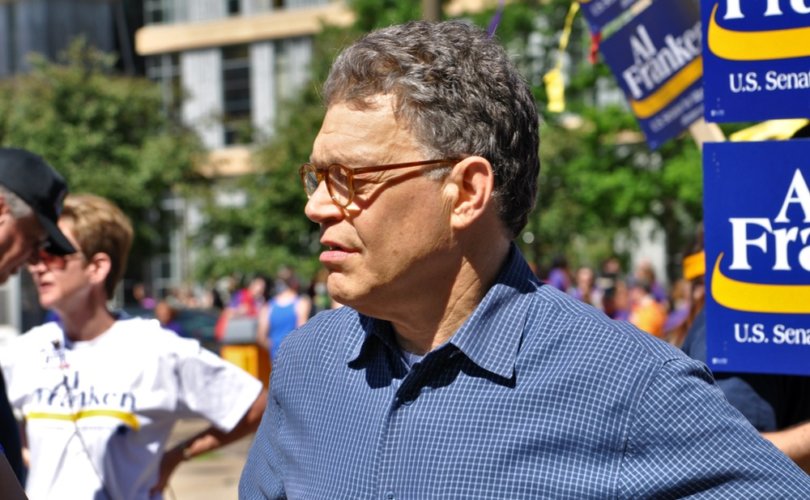 WASHINGTON, DC, November 20, 2017 (LifeSiteNews) – Minnesota Senator Al Franken’s sexual misconduct from the past has come back to haunt him. Unlike other high-profile celebrities and politicians who have recently been accused of various forms of sexual harassment, Franken’s antics are more than allegations. Some are recorded on film and in print.

A report in the Daily Mail suggests that Senator Franken has quickly gone from, “Democratic darling to dirty old man.”

Last week, KABC radio show host Leeann Tweeden took to the airwaves to talk about how during a USO Tour to Afghanistan with Franken in 2006, he forcibly kissed and groped her.

As she slept on the return flight, Franken posed for a photographer as he hovered over Tweeden, grinning broadly for the camera as he reached out to simulate cupping her breasts. Tweeden was horrified to view the photograph after she returned from the trip.

In an interview on ABC’s Good Morning America, Tweeden said she spoke out after more than ten years, not to destroy Franken, but to “change the culture.”

Tweeden said that after Franken had forcibly kissed her and stuck his tongue into her mouth at the outset of their USO Tour, she “had to endure being with him for almost two weeks.  There were little jabs, there were comments.”  She continued, “I separated myself … as much as I could from him.”

“It was the humiliation through the two weeks of the tour that people don’t hear about,” that caused her continued stress and discomfort.  “So at the end when I got that picture, it was like the final parting shot.”  Imitating Franken, Tweeden said, “She’s going to see this when she gets home.  I got you one last time.”

Tweeden added, “I was belittled and humiliated.”

Another woman has come forward this week, accusing Franken of touching her buttocks in 2010 while both posed for a photo at the Minnesota State Fair.

During a Hollywood ‘Roast’ of Director Rob Reiner, son of Carl Reiner, Franken joked about how Rob’s dad invited his friends over to rape his son.

“On a typical night, Carl would slip into Rob’s bed, roll him over, swab him down and say something like, ‘I’m thinking about hiring Morey Amsterdam to play Buddy Sorrell, what do you think?”

Franken continued, “Well, the success of The Dick Van Dyke Show changed things dramatically. Carl started inviting many of his famous friends to f**k his son. That list includes some of the greats in comedy: Paul Lynde, Dom DeLuise, Rip Taylor, Danny Kaye, Charles Nelson Reilly and Rock Hudson—whom I frankly don’t think is that funny.”

In a New York Magazine article published in 1995, Franken spoke unashamedly about his fantasy rape of a 60 Minutes reporter.

“And, ‘I give the pills to Lesley Stahl. Then, when Lesley’s passed out, I take her to the closet and rape her,’” Franken said. “Or, ‘that’s why you never see Lesley until February.’ Or, ‘when she passes out, I put her in various positions and take pictures of her.’”

‘Glad That Homosexual got Killed’

In a 1976 interview in the Harvard Crimson, Harvard alum Franken declared, “I just don't like homosexuals. If you ask me, they're all homosexuals in the Pudding.” [Pudding is short for the Hasty Pudding Institute, a Harvard social club which produces theatricals.]  Franken continued, “Hey, I was glad when that Pudding homosexual got killed in Philadelphia.”

The Harvard Crimson’s interviewer noted that Franken’s “smile became so broad it pushed his eyes shut. He couldn't stand it any longer. ‘Put that in, put that in,’ Franken laughed, leaning over the desk. ‘I'd love to see that in The Crimson.’”

Democrat candidate Bill O’Neill, running for governor of Ohio, offered on his Facebook Page a strange and perhaps unwelcome defense of Franken.

“Now that the dogs of war are calling for the head of Senator Al Franken I believe it is time to speak up on behalf of all heterosexual males. As a candidate for Governor let me save my opponents some research time. In the last fifty years I was sexually intimate with approximately 50 very attractive females. It ranged from a gorgeous blonde who was my first true love and we made passionate love in the hayloft of her parents barn and ended with a drop dead gorgeous red head from Cleveland.”

O’Neill continues, “Now can we get back to discussing legalizing marijuana and opening the state hospital network to combat the opioid crisis. I am sooooo disappointed by this national feeding frenzy about sexual indiscretions decades ago.”