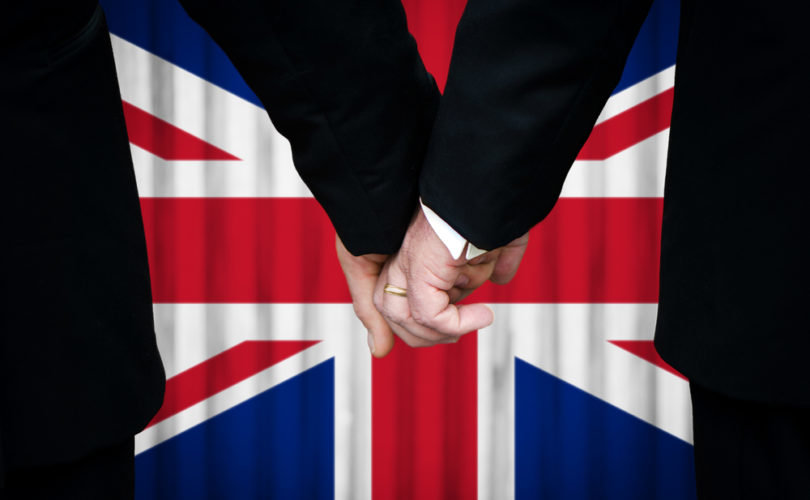 July 5, 2016 (LifeSiteNews) — The number of sexually transmitted infections (STIs) among men who have sex with men increased 10 percent from 2014 to 2015, Public Health England (PHE) reported Tuesday.

In 2015, “there were large increases in diagnoses of gonorrhea (11 percent) and syphilis (20 percent), continuing the rising trends in these infections of the past five years,” PHE reported, and “these rises have occurred mostly in gay, bisexual, or other men who have sex with men.”

PHE’s report noted that the number of males diagnosed with gonorrhea, syphilis, and genital herpes has “increased considerably.”

Men who have sex with men bear the brunt of STIs, according to the report.

“Of particular concern is the continuing and rapid rise in syphilis and gonorrhea among MSM [men who have sex with men], which strongly suggests high levels of condom-less sex,” the report noted. “HIV serosorting, the practice of engaging in condom-less sex with partners believed to be of the same HIV status, increases the risk of infection with STIs, hepatitis B and C, and sexually transmissible enteric infections like Shigella, and likely plays a role in the reported STI trends. For those who are HIV negative, serosorting increases the risk of HIV seroconversion as 14 percent of MSM are unaware of their infection.”

The U.S. Centers for Disease Control warns, “Condom use cannot provide absolute protection against any STD. The most reliable ways to avoid transmission of STDs are to abstain from sexual activity, or to be in a long-term, mutually monogamous relationship with an uninfected partner.”

The report also noted that the population of men who have sex with men contains some who identify as heterosexual, indicating “diversity” and “the need for culturally appropriate and sensitive targeting of health promotion messages, including at cruising sites and sex on premises venues.”

PHE has hired HIV Prevention England to address “stigma and discrimination” among men who have sex with men and other at-risk populations and promote “HIV testing, condom use, awareness of STIs, and other evidence-based HIV prevention interventions.”