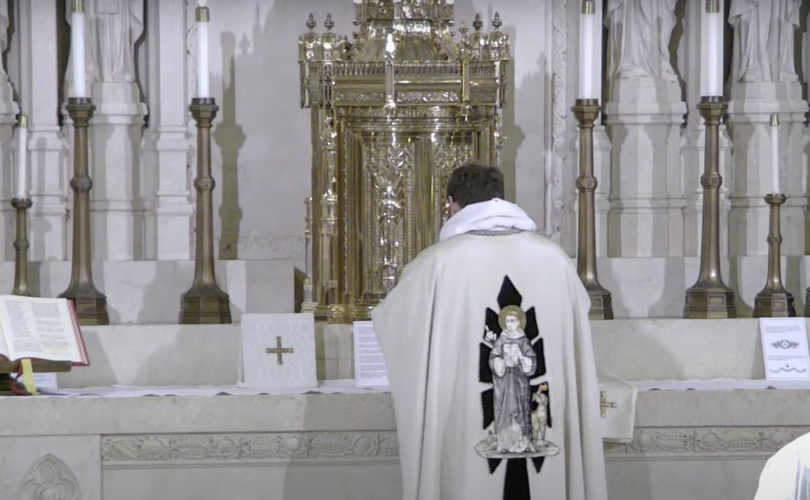 CORK, Ireland (LifeSiteNews) – Catholics who attended the Dominican Rite Mass in Cork City have expressed their frustration to LifeSiteNews with the local bishop’s decision to suppress the Order’s traditional rite in his diocese.

Bishop Fintan Gavin of the Diocese of Cork & Ross directed the Dominican Order to close down the well-attended ancient Mass earlier this month, almost 800 years after the Order arrived in the southern Irish city.

Acting on Pope Francis’ 2021 Motu proprio Traditionis Custodes, the Dublin native had already stopped the Traditional Latin Mass from being offered at a Franciscan Friary in Cork and ceased all traditional Masses on weekdays in the nearby Saints Peter & Paul’s Church.

Speaking to LifeSiteNews this week, members of the affected laity said the latest decision was “shameful yet predictable” and another sign that “inclusivity and dialogue” is for everyone except traditional Catholics.

“We’re really disappointed that the bishop suppressed our family’s access to the Dominican Rite,” said father-of-two Liam Ó’Síocháin. “He has shown little concern for our souls in doing so, and none of us were even consulted.”

“So much for inclusivity and dialogue – those terms are only platitudes from modernists who will attack nothing except the Traditional Latin Mass and Catholics who want to uphold the true Faith,” Mr. Ó’Síocháin insisted.

Mrs. Margaret O’Síocháin had a word of encouragement for the Dominican Order who provided the old rite to many young Catholics in Cork City.

“It was such a blessing being able to bring our children to one of the most beautiful Rites in the Catholic Church,” she said. “While I am deeply disappointed about this suppression, as the modernists decline and the traditional generation continues to grow exponentially, I have great hope.”

“We only hope and pray that the good Dominicans educate themselves in the rich heritage of their Order, so that when their time comes they will have the proper formation in the truths of the Faith necessary for their work.”

Wayne Costello, who also attended the Mass, said the recent comments of a newly ordained diocesan priest calling for “inclusivity and a more communicative Church” were ironic following the suppression of the Dominican Rite in the diocese.

“The same bishop who welcomed the ordination has suppressed the Dominican rite, a rite that is gaining traction among previously marginalized Catholics,” Costello said. “It appears the bishop, who speaks about inclusivity and marginalization, is realizing the very affect he believes he is repudiating.”

“It is utterly shameful yet predictable that a hierarchy, being so hypocritical, seek to implement inclusive practices while excluding a remnant of traditional Catholics.”

The head of Traditional Latin Mass Ireland told LifeSiteNews it is “tragic for the bishop to end almost eight centuries of traditional Christian worship in the diocese, with the Dominican Order arriving in Cork in 1229.”

“This is illustrative of a trend we’ve been witnessing for the past few years not only within the diocese of Cork & Ross, but all across Ireland,” Mr. Graham Eoin Ó Maonaigh told LifeSiteNews.

“Bishops are ordering the Latin Masses to cease without any dialogue or discussion with the laity who so deeply treasure the Tridentine Mass,” he continued. “Many Catholics who attend the Latin Mass feel unfairly targeted and view the actions of bishops as rigid and ironic in this modern Church of synodal synods on synodality.”

“In Ireland, only 16 Latin Masses remain out of a high-water mark of 28. While Belfast has gained one Mass, Derry is now the largest city in Ireland with no access to a Latin Mass,” Ó Maonaigh added.

Bishop Fintan Gavin did not respond to questions from LifeSiteNews about whether he would be willing to meet with laity affected by his decision.

The Dominican Rite itself was systematized for the entire Order in 1246, thirty years after the Order of Preachers was founded in 1216.

Shawn Tribe of the New Liturgical Movement notes that the Psalm “Judica me Deus” is not said in the Dominican Rite during low Mass, while the Confiteor contains the name of St. Dominic and is shorter than that of the Roman Rite.

Two Dominicans were ordained as priests on September 4 in St. Saviour’s, Dublin.