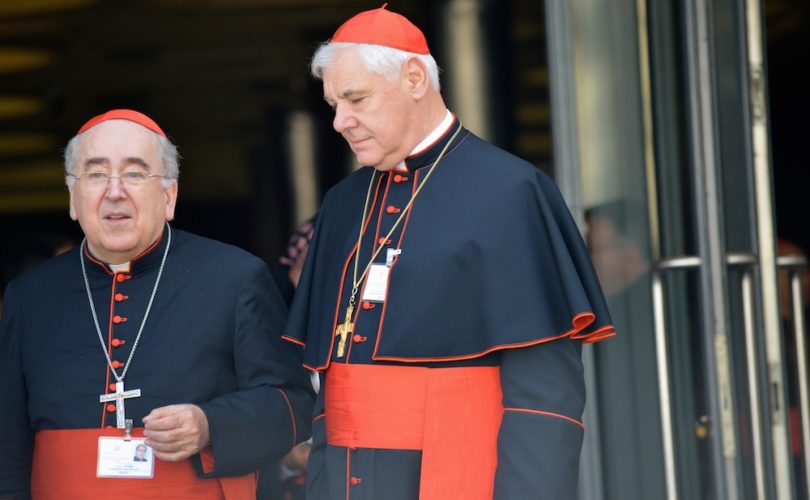 Cardinal Gerhard Muller (r) leaves the hall where the Synod on the Family is taking place last week. He reportedly slammed the Synod's mid-term report as 'shameful.'John-Henry Westen / LifeSiteNews.com

Update Oct. 16 9:00 am EST: At Thursday’s press conference at the Vatican, Father Federico Lombardi, director of the Holy See Press Office, said that Cardinal Müller asked him to tell the press conference that he did not use the words ascribed to him by La Repubblica. According to Lombardi, Müller said it is not the language he would use. It’s unclear exactly what led to Lombardi making this statement, and what words Müller actually used in the small group, but it is clear that Müller, among many others, has raised serious concern with the interim relatio released Monday.

ROME — “Undignified, shameful” and “completely wrong.” This was the terse assessment of Cardinal Gerhard Müller, the head of the Vatican's Congregation for the Doctrine of the Faith, about the Synod on the Family's so-called “relatio,” or midterm report, in one of the Synod's “small groups,” as reported by La Reppublica.

Thus far, most of the critics are voicing concern behind closed doors in the Synod hall, especially in the circules minores, or small groups, that are meeting this week to review and revise the report, known as the Relatio post disceptationem, or “report after the debate.” Of the three English-language small groups, LifeSiteNews has confirmed that pluralities in at least two were strongly opposed to the relatio.

But several bishops and cardinals have openly criticized the document in public fora, insisting it is not a fair reflection of their discussions and is simply unacceptable.

There is of course, Cardinal Burke’s frank statement to Catholic World Report that “faithful shepherds … cannot accept” the document, which he says betrays an approach that is “not of the Church.”

But even at the Vatican’s own press conference Tuesday, South African Cardinal Wilfrid Napier made it clear that he, along with the English-language small group he is moderating, are quite displeased.

He acknowledged, as many other fathers have, that he was “surprised” the relatio was published, and said the media circus that the relatio’s release occasioned, with reports across the globe signalling a “softer” approach or outright rejection of Church teaching, has meant that the Synod fathers are now “working from a position that is virtually irredeemable.”

“The message has gone out and it's not a true message,” he added. “Whatever we say hereafter is going to be as if we're doing some damage control.”

When a representative of Voice of the Family, a coalition of pro-life and pro-family groups, asked him if the Church would consider rescinding the document, Napier said that would be too “radical.” But he stressed that it is a provisional document under review, and he clearly believed it would be thoroughly revised for the final report.

Others to raise concern in interviews include the Synod’s Polish representative, Archbishop Stanislaw Gądecki of Poznań, who said it departs from the magisterium of Pope St. John Paul II and is guilty of the “sin of omission” in its presentation of Catholic doctrine, and Latvian Archbishop Zbigniew Stankiewicz.

Stankiewicz, in an interview with Vatican Radio published on the website of the Polish Bishops Conference, said the document risks “dancing to the world’s music” and succumbing to secular influences. “My impression is that the vast majority of the bishops are thinking well and will not let go and surrender to this pressure,” he said. “The world truly does not need a counterfeit gospel.”

In terms of the Synod discussions, on Tuesday, the Vatican released a summary of the interventions from bishops reacting to the relatio on Monday morning after it was read.

According to the press office, Synod fathers noted that “the word ‘sin’ is almost absent from the Relatio,” and that the document should adopt “the prophetic tone of Jesus’ words … to avoid the risk of conformity to the mentality of today’s world.”

On the issue of homosexuality, the summary says “the need for welcome was highlighted,” but notes that fathers said the document should take care “that the impression of a positive evaluation of such a tendency on the part of the Church is not created.”

“The same care was advised with regard to cohabitation,” the summary added.

The Synod document must also “face in more detail and more decisively not only abortion, but also that of surrogacy,” it said.

The Synod organizers have been at great pains to stress the “fraternal spirit” at play in the Synod. But however polite the discussions may be, it’s clear that the orthodox critics of what seems to have emerged as the unofficial “party line,” as expressed so well in Monday’s relatio, clearly believe that the very integrity of the Catholic faith is at stake.