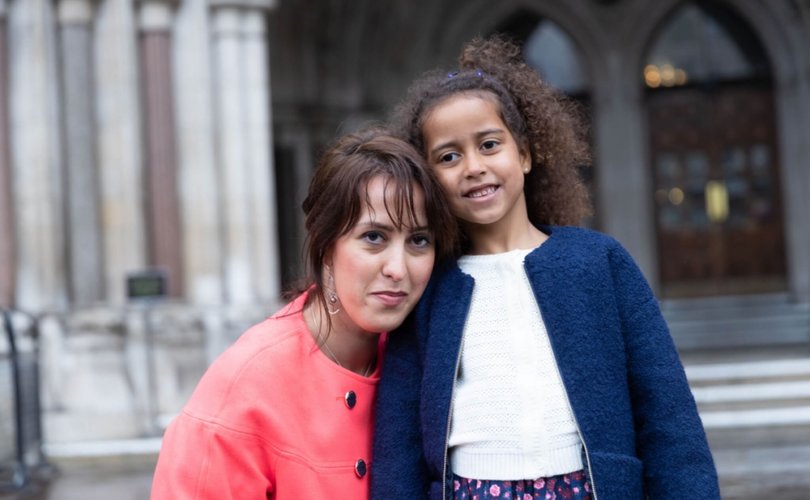 Alina Dulgheriu and her daughter

LONDON, July 5, 2018 (LifeSiteNews) – On a winter’s day in 2009, a young Romanian woman was walking down a London street on her way to an abortion center.

She was eight weeks pregnant.

The weeks prior to her decision to go there had been traumatic.

On 3 October she had found she was pregnant. She telephoned the father of the child, her then boyfriend’s response was immediate: “You have to have an abortion.” But she didn’t want to. Instinctively she knew it was wrong and wished to carry on with her pregnancy.

He pressed her further: “Are you going to be a father to the child?” She was confused. He then told her something she did not know: “I can’t have another child.” With this new information, the pregnant woman knew she was on her own, in more ways than one. And then, when he realized that she was going to continue with the pregnancy, he began to laugh mockingly down the phone line at her predicament.

A few weeks later the same boyfriend re-appeared in the woman’s life, this time with his cousin. Together they tried to pressure the woman into having an abortion.

Still, the woman persisted in her desire to have the baby. That said she had never felt so alone. Everything had changed on that morning she discovered she was pregnant. She had collapsed on seeing the test results. Later, all she could remember was how everything had suddenly turned black, and, indeed, seemed to remain so in the weeks that were to follow.

At that time she had been working as a nanny in London. Until then, her employers were happy with her work. They had made her part of their family. She had a job, money and accommodation. All of that changed when she told her employers she was pregnant. They asked her to leave immediately.  As well as pregnant she was now unemployed and homeless in a foreign country.

She called her parents in Romania. Her mother told her to have an abortion. Her parents had little else to say to her.

Now she was becoming desperate, increasingly so. Frantically, she searched for help – any help – practical, emotional, anything, but found only indifference.  It was clear that she was alone and that everyone around her was pointing to one solution only. Reluctantly, she started to listen to that advice. In the end, she decided to have an abortion.

So on that winter’s day, it was a solitary figure that made its way to an abortion center in central London. As she drew near the place, she began to cry. She steadied herself as best she could, as all around her the impersonal hustle of the city continued, but still the tears rolled down her cheeks. And, yet, inside her head there seemed to be two competing voices, one telling her to stop and turn back, another telling her to go through with the abortion. Through her mounting depression, she struggled on.

Finally, the street name she had been searching for came into view. As she drew near to the doorway of the abortion center, a woman approached her. She held out a leaflet with the image of a baby in a womb. The Romanian woman recognized the image instantly for she had gone for a scan weeks previously. Then, she had witnessed with delight the images on the screen of her own baby moving in her womb; while watching, the expectant mother had felt an unexpected joy. She turned to the stranger beside her still holding the photograph.

The woman facing her replied: “ Yes, I can help you.” The two began exchanging some information, included phone numbers.

At that moment, the door of the abortion center flew open. An employee of the center stood staring at the two women talking. Recognizing the woman holding the leaflet, the employee’s face turned to anger.

The stranger who had offered to help was an older woman. She continued to look straight at the Romanian woman, before drawing something from a pocket and handing it to the woman. It was a pink plastic rosary. The younger woman took it. And, as she did so, she turned to the abortionist in the doorway and said: “They can help me.” And with that, she left clutching the recently received rosary accompanied by a woman whom she had just met.

That was not the end of the matter though. Days later the Romanian would return to the same place.

The advice and the promises of help seemed too good to be true for the pregnant Romanian. The voices in her head kept telling her this, and more so now that “the clock was ticking”, if she did not go through with the abortion soon she would have to keep the baby. So, days later, she returned to the abortion center.

The same woman who had given her the rosary was again standing outside. This time the Romanian went straight past her into the center.

Inside the abortion center, she now recalls only two emotions: fear and tension. She also remembered a distinctly uneasy feeling from the moment she found herself there. It was as if the center walls were closing in on her, suffocating her, crushing the life within her.

A disinterested center receptionist gave her a form to fill out, and then sent her off to a dingy waiting room.

As the Romanian was sitting there, form in hand, her phone lit up unexpectedly. There was a message:

The Romanian woman knew where this message had come from. At that moment she knew the older woman was still standing outside. She was waiting to help her, and her unborn child. Immediately, the pregnant woman got up to leave. A center employee had been watching her though. As the Romanian made to go, the abortionist grabbed her arm. With a strange look in her eyes, the center employee then began telling her all the reasons she must have an abortion, over and over, insistently, persistently.

This moment changed everything for the Romanian. She stood there looking into the face of another woman, one urging her to kill her unborn child; in contrast, she thought of the woman standing outside wanting only to care for both her and the child she carried in her womb.

Now the Romanian felt a wave of revulsion as she looked again into the contorted face before her. Feeling only disgust, she slowly removed the hand that held her, and then, as quickly as she could manage, fled the center and all the hopeless gloom enshrouded there.

She never returned for the rest of the story is a happy one. The Romanian was found a place to live; she was assisted financially; she was given support in attending various medical appointments; she was helped emotionally and practically throughout her pregnancy until, some months later, at a London hospital, a smiling baby girl was given into her welcoming arms.

What you have just read is the story of Alina Dulgheriu. The organization that helped her and for which she is forever grateful is the pro-life charity Good Counsel Network.

Alina’s story has not ended there, however. Today, she is at the center of a legal challenge to the so-called ‘buffer zones’ that have been imposed on anyone offering support and help to pregnant mothers going, or being taken to, an abortion center. What Alina wants the British authorities to recognize is that there are many women who are in as difficult situations as she found herself. These are women desperately in need of real help, not abortion, as the answer to the predicament they find themselves in on account of an unwanted pregnancy.

In the years since her own unplanned pregnancy, Alina too has found herself outside abortion centers offering help to women. Sometimes alongside the older woman who had offered to help her. In fact, she has stood outside the same center that she had entered on that day some years back. The employee of the center who had tried to convince her to end her pregnancy still spies on Alina through the window of the center.

This week the High Court in London decided upon the legal challenge that Alina had brought. She and others like her will not be allowed to continue to offer help to pregnant mothers. The full force of the law is to be usefd to prevent them from doing so. Regardless, Alina is determined to continue in her struggle for the welfare of those pregnant women and the children they carry in their wombs.

Alina is now a passionate advocate for and defender of the unborn child. Her personal experiences have made her so. What makes her unique is that she knows exactly how the women feel entering such places. She knows the darkness that pervades their lives, the pressure from without, and the self-loathing from within. Today she comes to their side not to moralize or judge but to offer the hand of friendship and a willingness to help in practical ways.

And, while so doing, she carries an object with her, one that has grown more precious as the years have passed since it was first presented to her one bleak winter’s day outside an abortion center, namely, a pink plastic rosary.

Editor’s note: Alina Dulgheriu has launched a crowdfunding campaign to raise £50,000 to fund an ongoing legal challenge against the “buffer zones”.