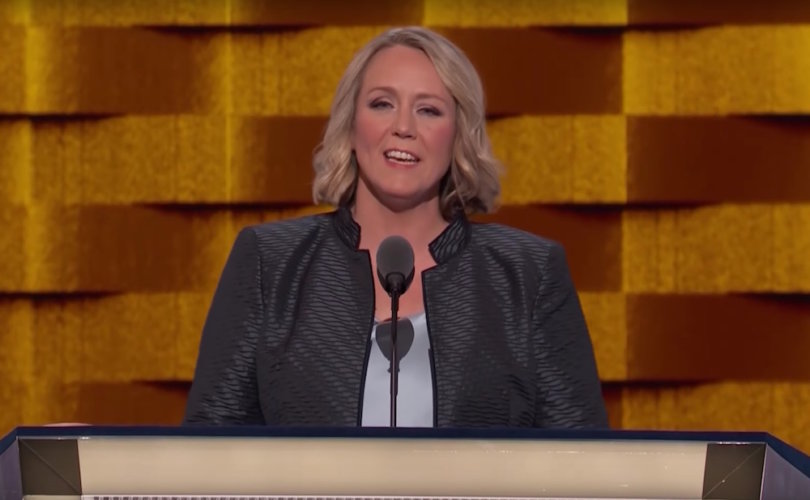 PHILADELPHIA, July 28, 2016 (LifeSiteNews) – EMILY’s List President Stephanie Schriock may be the next head of the Democratic National Committee, the apparatus that controls all the Democratic Party’s electoral strategies, funding, and, often, messaging.

According to Politico, Schriock – who held leading roles in the presidential campaign of Howard Dean, the Senate campaigns of Jon Tester and Al Franken, and considered running for Senate in Montana – has been named as a leading candidate for the role after Debbie Wasserman Schultz’s resignation.

Schriock was one of three national abortion lobby leaders to address the 2016 Democratic National Convention in Philadelphia, with Planned Parenthood CEO Cecile Richards and NARAL Pro-Choice American President Ilyse Hogue. Richards was seated next to Bill Clinton on the opening evening of the convention, while Hogue told the delegates about her abortion, receiving an ovation in the process.

ABC News pressed Schriock about rumors she would soon lead the party, drawing a coy response. “I have the very best job in American politics today and I love it,” she said.

Both anchors replied in unison, “So that’s a yes?”

Schriock remained non-committal, thanking Donna Brazile for taking over as chair of the convention.

During her speech, she castigated Republicans as “dangerous, “desperate,” “terrified” people who “don’t respect women” and “want to control women.”

Republicans would “refuse to stand up for working mothers trying to balance career and family,” she said.

“That's why they'd let your boss fire you for using birth control, and force us to undergo invasive trans-vaginal ultrasounds,” she said.

“They're terrified of Hillary Clinton,” Schriock continued. “They're panicking. They're desperate. And that means they're dangerous.”

Ilyse Hogue delivered a similar message of misogyny, saying pro-life Republicans wish to deny women agency and autonomy. “It's not abortion that bothers them,” Hogue continued. “It's empowering women to live our own lives.”

Schriock, too, referenced Donald Trump’s off-the-cuff statement that women should receive “some form of punishment” for having an abortion, as did numerous other DNC speakers.

“It was a dream” to nominate Clinton, she told ABC News later that evening. “This is someone who’s been an incredible champion.”

She vowed she would not work with Republicans “until they change their policies and their platform, which has only gotten worse this year” by calling for the defunding of Planned Parenthood, as well as its 36-year-long support for a constitutional amendment to protect all unborn lives from the moment of conception.

Democrats applaud NARAL president for having an abortion

Cecile Richards: ‘Hillary has always been in Planned Parenthood’s corner’