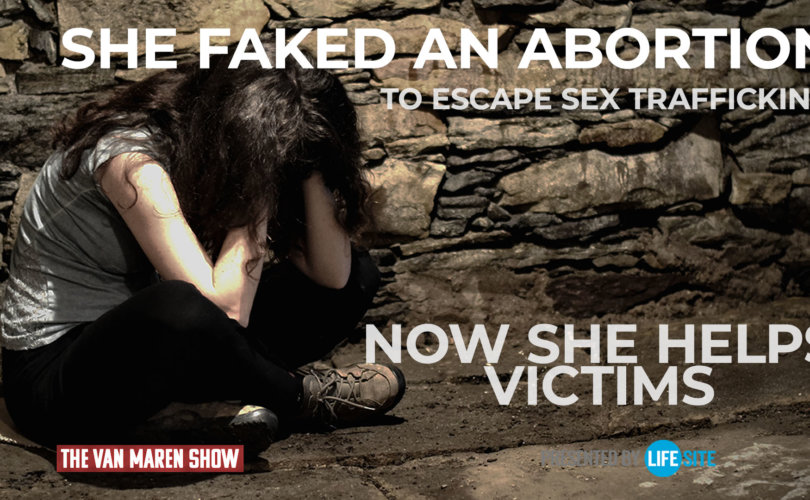 July 15, 2020 (LifeSiteNews) — The Florida attorney general launched an investigation into a Planned Parenthood facility that neglected to follow state reporting laws, thus facilitating sex-trafficking. This, among other recent stories, has pushed sex-trafficking into the spotlight of many news stories.

In today’s episode of The Van Maren Show, Darlene Pawlik, a victim of sex-trafficking at a young age, shares her story with Jonathon Van Maren, including how she faked an abortion, which enabled her to escape from her traffickers.

Pawlik was first sex-trafficked when she was just 14 years old. At a very young age, she had been abused by her father and molested by her uncle. Around the time she was 14, Pawlik recalls meeting an attractive, charismatic bodybuilder who lived in her neighborhood. He took an interest in everyone and was almost always around the neighborhood. It wasn’t long before Pawlik was targeted by this man.

After being ignored by her mother on her birthday, feeling hurt, neglected, and alone, Pawlik called up the man from her neighborhood. That night, she was sold to another man who kept laughing at how unsophisticated and clumsy she was, a girl of just 14 years old.

Pawlik continues with her story, recounting the abuse and violence she suffered at the hands of her handlers and those who “bought” her. When Pawlik became pregnant at 17 years old, the man from her neighborhood simply refused to let her go, insisting that she get an abortion. She knew she didn’t want to kill the life inside her, and she had to do something.

Pawlik dreamed about the horrors and violence of abortion, despite having no real understanding of abortion. “I had a dream that night before the procedure was supposed to happen. In my dream, I saw an abortion from the perspective of the womb, in color. I saw half a little face, stubby little fingers, part of a rib cage. Since I left school in the sixth grade, I had no natural knowledge of what was happening. But in my dream, it was clear as day,” Pawlik tells listeners.

She told her handler she had the abortion, using the details and emotion from her dream, and begged that he let her go. He finally relented and told her she was his again if she ever came back to that city.

Pawlik ran away and was taken in by a Catholic woman who opened her home to pregnant mothers. This woman helped Pawlik, and other mothers, to heal by taking them on retreats and encouraging them to speak about their feelings, issues, and concerns.

Pawlik was able to give birth to her baby and has overcome numerous obstacles since. She now works with crisis pregnancy centers to help them identify women who are sex-trafficked. She supports the ministry called Friends of the Unborn, set up by the woman who took her in decades ago. Pawlik also works with social workers to help them understand the inner workings of sex-trafficking.

Dr. Marianne Layden, who works at the University of Pennsylvania, argues that stripping, pornography, and prostitution all help show off the human body and validate its worth. Van Maren and Pawlik point out this is the opposite of the truth; in reality, these things all remove a person’s dignity, reducing the body to a product. Abortion furthers this sentiment by ignoring the personhood of the unborn. It additionally removes the consequences of sex-trafficking, encouraging further assault and abuse.

Pawlik shares that most people don’t fully understand the connection among prostitution, pornography, and sex-trafficking. Last year, Vermont proposed decriminalizing prostitution, which would have made it harder for girls to escape trafficking. With prostitution decriminalized, the network can grow and serve as a backbone for sex-trafficking. Additionally, it would prevent police from being able to approach young girls who truly need their help. It’s a full circle, and light needs to be shed on this dark, vile industry.

Darlene Pawlik also thanked all LifePetition signers who called on the Florida attorney general to look into the case of the forced abortion of the young girl in Florida. She states that secret and forced abortions happen all the time in the sex-trafficking world, and the abortion industry’s lack of reporting simply encourages more trafficking.

Pawlik works with multiple ministries to help support them in their work with sex-trafficking victims. These include:

Bags of Hope run by Jasmine Grace- Grace delivers bags with essentials and ministry items to prostitutes, strippers and women on street corners.

The Darling Princess — Pawlik's course on spotting and responding to sex-trafficking — can be found here on her website: https://www.thedarlingprincess.com/