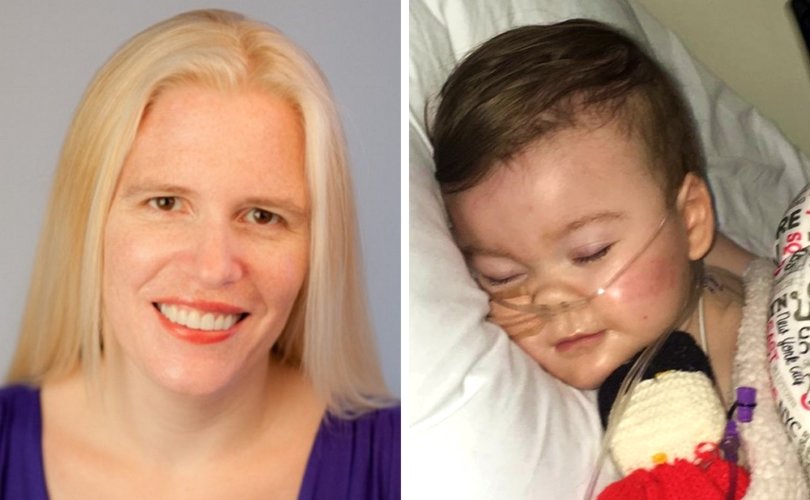 ENGLAND, May 7, 2018 (LifeSiteNews) – As a high-profile lay Catholic commentator in England, Caroline Farrow has experienced online abuse for years.

Unfortunately, Farrow’s advocacy for Alfie Evans’ family has led to unprecedented levels of harassment. Not only have strangers sent her insults and threats over Twitter, they have published her address, phone number, and the name of her children’s school.  Thanks to prank callers, her phone has been ringing off the hook. Last week police advised her to shut down her Twitter account for 72 hours.

Examples of the abuse she has received online include the following sentiments: “Farrow is f***ed, her time is coming, time is running out, Farrow is a spiteful evil b*tch who is about to get taken down, she needs to be taken to account, legally or otherwise, we are using social media to whip up hate & fury, she’ll need more than a shovel.”

Farrow says there are two different kinds of people targeting her. The most recent is comprised of fans of Alder Hey hospital, which fought Alfie Evans’ parents in court for the right to end the child’s life, and the National Health Service, for which many Britons have an almost religious fervour.

“[They] can’t believe the status quo has been challenged,” Farrow explained. “They’re outraged.”

But pseudonymous online attackers, known as “trolls”, have been coming after Farrow since she first joined a Catholic media initiative called Catholic Voices in 2011. Catholic Voices, founded by journalist Austen Iverleigh, trains young Catholics to explain Catholic teachings to interested journalists when Church-related stories break. Farrow began her training just after the British Prime Minister, David Cameron, announced plans to extend the definition of marriage to include same-sex couples.

“A lot of [our] training was dedicated to how Catholic Voices would fight the gay ‘marriage’ issue,” Caroline explained.

While debating the issue on Twitter, Farrow attracted the attention of a man with four thousand Twitter fans, who wrote “terrible things” about her. He even expressed a hope that her children would get cancer.

“He spent a couple of years obsessing on me,” Farrow said.

This troll was not alone: Farrow has at least two other online stalkers who have fixated on her for years, and they are now trying to recruit new Twitter-users to their anti-Farrow cause.

“They are using the Alfie Evans tragedy to leverage their own hatred….and to shut me down,” she explained.

Farrow believes that many of her critics are ideological opponents who resent a Catholic woman appearing on mainstream television and in mainstream newspapers. Frequently consulted by such high-profile British media figures as Piers Morgan, Farrow is one of the principal female representatives of orthodox Catholicism in the UK.

“They can’t bear it because I’m reasonable,” she explained of her critics. “They’re online painting me as a nasty bigot.”

Farrow said that she came “very late” to the Alfie Evans story. She first heard about the infant when she met an individual in right-to-life causes at a pro-life meeting.

“We’ve got this case coming to court soon; it’s going to be like Charlie Gard,” she recalled the individual telling her.

It was then that Farrow said she was asked if she could raise awareness of Alfie’s plight.

Farrow was moved both by the story and by the lack of a “coordinated Catholic effort” to help Alfie. She was put in touch with an activist who was working with the Evans family. Through this contact, Farrow was able to speak to members of the Evans family over the phone. By February she felt that she had established a working relationship with Alfie’s aunt Sarah Evans and some of the family’s friends. She was also given information about unfolding events from a “Liverpool Catholic mum” who simply went to Alder Hey and sat outside the pediatric intensive care unit while the legal battle over Alfie raged in the courts.

Farrow blogged, tweeted, and published articles about Alfie in the National Catholic Register and EWTN News. She gave interviews to EWTN, BBC Radio 4, and the Good Morning Britain talk show. She published details of the numerous hearings involved in Alfie’s case.

After Alfie died, Farrow found herself assailed with fresh hatred for having tweeted part of Benedetta Frigerio’s story in La Nuova Bussola Quotidiana that Alfie had been given four drugs shortly before he died. Farrow had been told a similar story by two other people in Liverpool, both of whom had phoned her within seven hours of Alfie’s 2:30 AM death.

When an administrator of the Alfie’s Army Official Facebook page contacted Farrow over Twitter to say Frigerio’s story was “causing great distress” and was “untrue,” trolls began to abuse Farrow for not removing the story from her Twitter feed. After tweeting her new misgivings about the story, Farrow contacted Frigerio. The Italian reporter insisted that her story was true and told Farrow who her sources were. Farrow then told her Twitter readers that she had asked “the family” to contact Frigerio directly to retract the story if it was false.

To the best of her knowledge, the family has not done so.

Meanwhile, she has found herself treated by Twitter-users as a scapegoat for Frigerio, as well as for the Alfie’s Army protesters, whose demonstrations are being falsely painted as violent.

“They’re blaming me for the angry mobs that didn’t even exist,” Farrow sighed.

Now Farrow hopes the police will be able to dissuade hate-filled strangers from harassing her.

“In some ways I’m not bothered because I have the light of Christ,” she said. Nevertheless, she does worry, especially as her principal haters have been obsessed with her for years, opening new Twitter accounts as quickly as Twitter shuts their old ones down.

“I wonder where they’re going to stop,” she concluded.

After her Friday night interview with LifeSiteNews, Farrow went back to work as a Catholic reporter on Saturday morning. She has begun using her Twitter account again to publish interviews with personalities at the UK March for Life.