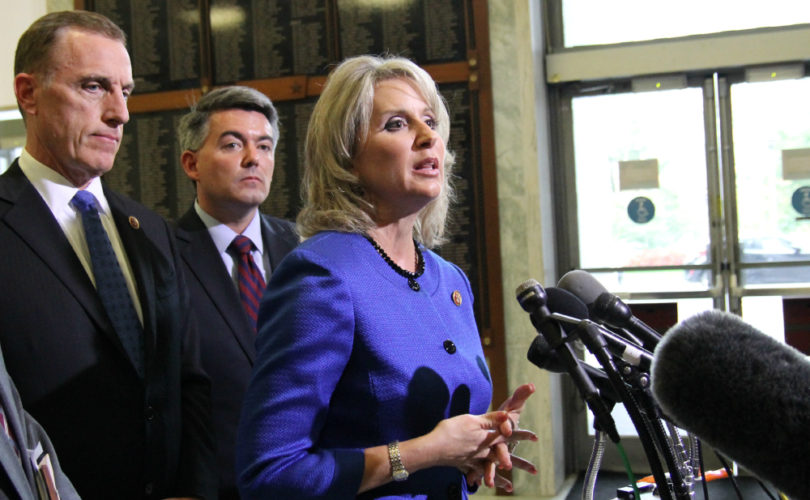 WASHINGTON, D.C., October 7, 2015 (LifeSiteNews) – Rep. Renee Ellmers is an infamous name in the pro-life movement. As the movement's top legislative priority – the Pain Capable Unborn Child Protection Act – was about to come up for a Congressional vote this January, she and a small group of Republicans led a rebellion that convinced House Speaker John Boehner to spike the vote.

Now, she wants to serve on a highly visible committee to investigate Planned Parenthood.

The House of Representatives is set to form a select committee to investigate charges that Planned Parenthood harvests and sells the organs of aborted babies for biological experimentation. The Speaker of the House will appoint the members of the committee, which will be part of the House Energy and Commerce Committee.

Congresswoman Ellmers has been lobbying House leaders to be named to one of its eight Republican slots, according to media accounts.

“If House leadership listen to her pitiful request, it will be a slap in the face to pro-lifers everywhere who have worked day and night to elect officials who hold life to be the most important right,” Kristan Hawkins, president of Students for Life of America, told LifeSiteNews.

Ellmers, Indiana Republican Jackie Walorski, and a handful of others reportedly objected to a clause in the Pain Capable act that required rape victims to report the crime to the police. Its defenders said the provision was necessary, because they could not trust the word of abortionists on the matter. The small rebellion left the bill's fate in doubt for months.

Pro-life leaders said her actions were “unforgivable” and said she must be defeated in a Republican primary. Ellmers, in turn, called her critics in the right to life movement “abhorrent and childish.”

Hawkins led some of those critics, bringing more than 70 young women to protest at the North Carolina congresswoman's office.

“The young women who I brought to Rep. Ellmers office the day of the March for Life were fiercely pro-life and had a message for the congresswoman: ‘Don’t use us for your agenda. We are the pro-life generation and we recognize true leaders when they stand up and fight for what is right.’”

The membership of the committee is unknown. House Speaker John Boehner is reportedly giving much of the appointment power to House Majority Leader Kevin McCarthy, R-CA, whom he is reported to be grooming as his successor.

A commentator at the popular RedState.com blog has written that Ellmers “already had a chance to do something for the pro-life movement, on a bill that’s much more popular than defunding Planned Parenthood, and she blinked. She does not have legitimate interest in defunding Planned Parenthood or taking any actual substantive action against them. What she wants is television commercial material during her upcoming primary campaign.”

Whatever her motivation, Hawkins does not want Ellmers on the committee.

“We demand that the House leadership refuse Rep. Ellmers request and move to appoint fearless advocates of the pre-born,” she said.